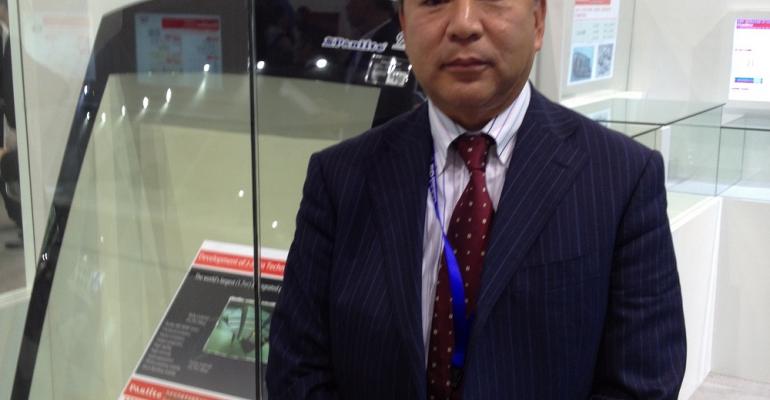 While full vehicle polycarbonate (PC) glazing would enable an attractive 30-40% weight reduction over glass in an era where automakers are prioritizing lightweighting in order to reduce emissions and improve fuel economy, widespread adoption is at least five years away according to materials supplier Teijin (Tokyo), a leading proponent of the shift away from glass.

While full vehicle polycarbonate (PC) glazing would enable an attractive 30-40% weight reduction over glass in an era where automakers are prioritizing lightweighting in order to reduce emissions and improve fuel economy, widespread adoption is at least five years away according to materials supplier Teijin (Tokyo), a leading proponent of the shift away from glass.

"The main issue we face is cost," says Toshihiko Saijo, Manager, Automotive Material Sales at Teijin. "Polycarbonate costs around $3 per kg while glass is a lot cheaper, so we need to reduce costs through process enhancement, design and part consolidation." Saijo and his colleagues were speaking to PlasticsToday at the recent Chinaplas show in Guangzhou.

"We aren't even sure at this stage if injection molding is the way to go [for large glazing]," notes Tadashi Tanaka, General Manager, Plastics Sales Division at Teijin. "It could turn out that sheet extrusion plus thermoforming is a better option for large parts." In any case, Tanaka is viewing a 5-10-year time frame for full-scale commercial adoption. "We've completed the development phase in terms of quality. Now it's time for economically viable process development."

Teijin is actively developing molding technology for glazing at its R&D site in Chiba, Japan, while hard coat technology is under development at the company's Matsuyama site. The company's coating process employs a thermoset resin-based protective coating that is applied after demolding.

The 3400-tonne dual-shot Meiki injection press installed at Chiba has been used to mold 4-mm-thick glazing in a two-shot process with shot weight of up to 14 kg. One prototype part molded by Teijin is a 1.7-sq-m integrated panoramic roof and body panel. The body panel material is a PC/PET alloy.

In the meantime, PC glazing employing Teijin's material has been making inroads in quarter and rear windows in several vehicles made in Europe and Saijo revealed a key reason behind its successes at Chinaplas. "Our PC grades enable the use of the same bonding agent as for glass," he explains. "This makes the switch easier."

In other PC developments, Teijin has developed a high pencil hardness grade of PC that satisfies head impact requirements for auto applications (undergoing ductile fracture rather than brittle fracture). The sample grade, dubbed SH-PC, has already found use in the form of a black color compound in a car navigation system housing employed in a Japanese vehicle. The non-painted part realizes a color that is close to piano black.

Teijin is also developing PC grades featuring extremely low linear coefficient of expansion for use in body panels. Grade AM-9937F, for example has been adopted in the Lexus HS for the license garnish. "This painted part requires excellent dimensional stability because rear lamps are fitting directly and it is part of the rear hatch," says Teijin's Saijo. Previously, a polyester-based sheet molding compound (SMC) was employed.

Another area where PC has promise is agriculture according to Teijin. "In the Netherlands, a company is using PC sheet in glasshouses and use is also starting in Japan in the 'smart agri' sector," says Saijo.

In other auto-related developments, Teijin affiliate DuPont Teijin Films has developed a PET-based multilayer film that can replace chrome plating and deliver a 30% cost reduction to boot. HFF highly formable film can be drawn by more than 400%, and it is suitable for either insert molding or post-process application at room temperature out of the mold. The film comprises a scratch resistant layer, the PET HFF layer, a metallized layer, and a backer/adhesion layer.