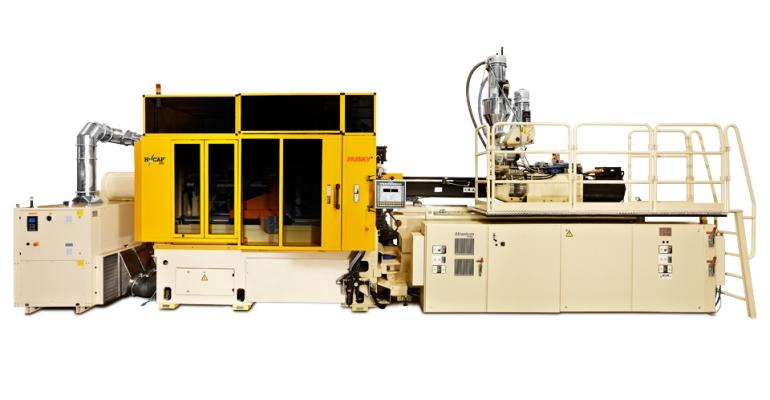 One surefire way to cut cycle time in injection molding is to shorten or eliminate process steps. Working from that simple premise, Husky Injection Molding debuted a revolutionary closure technology at Chinaplas 2012 that eliminates mold open/close and the precious seconds that process eats up.

One surefire way to cut cycle time in injection molding is to shorten or eliminate process steps. Working from that simple premise, Husky Injection Molding debuted a revolutionary closure technology at Chinaplas 2012 that eliminates mold open/close and the precious seconds that process eats up.

Behind a locked glass enclosure, into which attendees could only gain entrance with a special Husky supplied badge, the supplier operated a HyCAP HPP 300 machine injection molding a 1.2g 29/25 lightweight water closure in a 1.85 second cycle from a 72-cavity KTW mold. Husky acquired KTW, an Austria-based closure moldmaking expert, in 2011.

Walls on either side of the injection molding machine, which was situated so that only the platen end was visible from outside the glass partition, prevented show attendees not given access into the cell from seeing its most distinctive feature, a mold that stayed closed while 72 caps dropped from its lower half onto a conveyor every 1.85 seconds.

"Husky is a leading equipment and service supplier for PET bottles," explained John Zhang, general manager China South PET & Packaging. "We've had a dominant position in PET market, and every bottle needs a closure. It's natural for Husky to have leadership in closures as well."

Zhang said that in a 72-cavity mold, it's typical to see cycle times of 2.5 to 3 seconds vs. the 1.85 seconds achieved by the HyCAP. The fact that Husky debuted the technology in China is a testament to the local market's explosive growth potential for beverages. Zhang noted that per capita beverage consumption in China is still relatively low compared to developed western markets, saying that the country could double or triple that consumption, despite any broader economic softening in the country. The beverage market has historically expanded at 1.5 to 2 times the growth rate for GDP, according to Zhang.

"Even though the Chinese are forecasting slower growth, the country will still have very strong growth," Zhang said, before holding up a water bottle, and adding, "this is the last thing you take off the shopping list."

Zhang said that according to official numbers from China beverage industry, the segment enjoyed 15% overall growth of all segments. The specialty segment, which includes water, tea, and juice, experienced much faster growth, surging up to 30%.

Zhang said that Husky is already very well established in high-volume big-output PET systems, offerings cells that go up to 192 cavities. This system, by contrast, ranges from eight to 48 cavities. "Now, Husky has a system that can support customers in emerging markets," Zhang said, "or big customers that have some smaller volume applications." 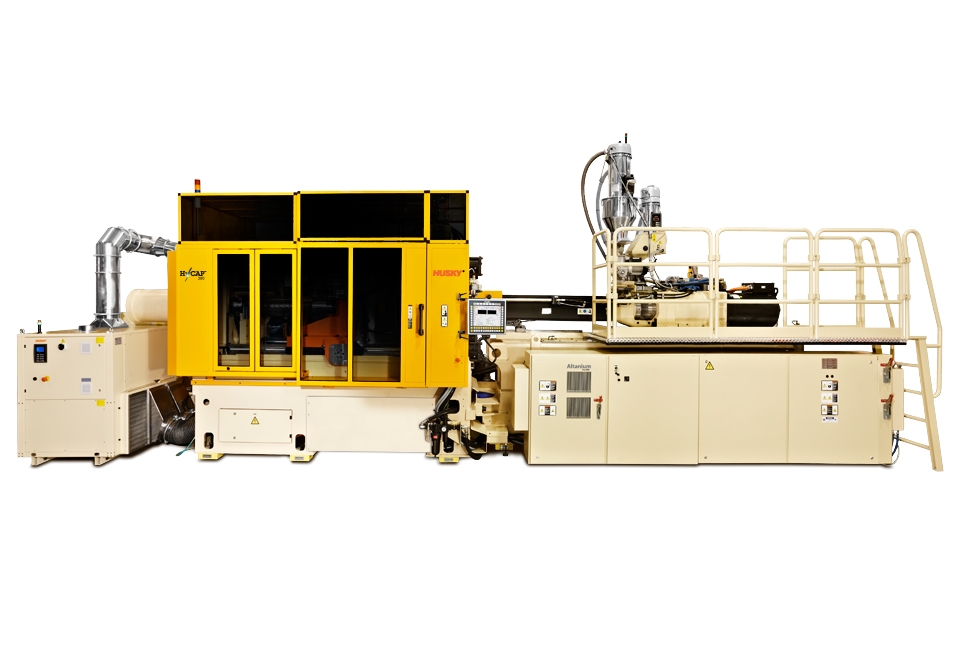