Chinaplas: A push for biodegradable plastic bags in China

Shanghai, China — Upon arrival in China, it's hard not to ignore the pollution in the air and trash creating an eyesore on the ground. China is playing a big price for its swelling pollution. For instance, in Shanghai, the cost of pollution is estimated at $420 million.

Shanghai, China — Upon arrival in China, it's hard not to ignore the pollution in the air and trash creating an eyesore on the ground. China is playing a big price for its swelling pollution. For instance, in Shanghai, the cost of pollution is estimated at $420 million.

It seems the country is fully aware of its somewhat 'trashy' reputation and is trying to combat this perception. In fact, Chinaplas 2014, held at Shanghai New International Expo Centre, PR China from April 23 - 26, is promoting sustainability under the theme of "Greenovation - Solution to Sustainability," with "The City of Tomorrow" and "Green Conference" as two featured events. 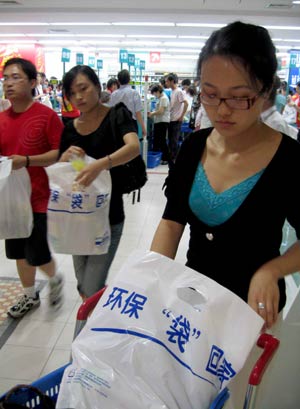 And in keeping up with the theme of trying to promote a more environmentally friendly China, the Chinaplas Media Day kicked off with a Chinese company promoting the usage of biodegradable plastic and biobased plastic. While Shanxi Jinhui Energy Group's success was built on the coal coking industry and salt chemicals, the company is promoting its work in low carbon and clean technology at Chinaplas 2014.

"Air quality is a huge concern," said Janice Li, VP of the Shanxi Jinhui Group. "The economic cost of pollution is going up."

"We need to ask ourselves, what type of environment are we providing for our children?" she asked.

The Chinese government has implemented some policies, such as a plastic bag ban, but Li acknowledged that the result of these polices have not been significant.

"Non degradable plastic bags is in wide use in China despite repeated provisions," she said.

The company claims to own the largest capacity of PBAT production in Asia, a terpolymer made of 1, 4-butanediol, adipic acid and terephthalic acid. The company touts that this biodegradable film features 120% tear resistance and 130% impact strength compared to PE, due to its benzene ring. PBAT can be used in a variety of plastic products, including shopping bags.

PBAT can be decomposed into carbon dioxide and water in 180 days by microorganisms under compostable conditions. Jinhui Zhaolong's PBAT production is a one-step polymerization technology, which meets the U.S. FDA Food Contact Substance requirements and also conforms to the bioplastics standards of the European Union EN13432.