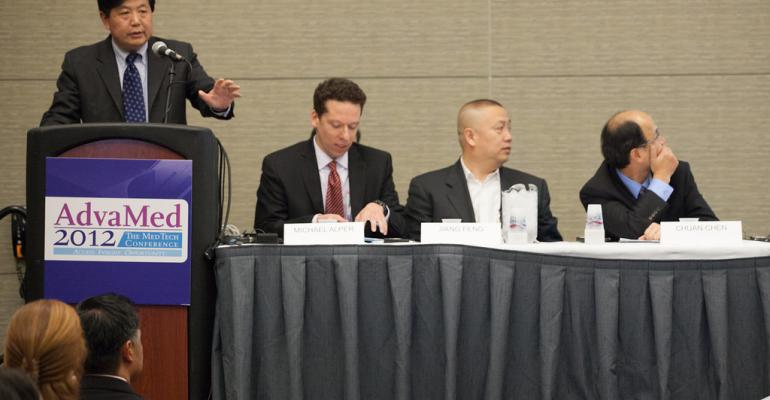 The Chinese market for medical devices is changing rapidly, creating new opportunities for companies with technology not available in the country. That was the message from a panel of experts at Advamed 2012 in Boston, the annual conference of the Advanced Medical Technology Association (Washington, DC).

The Chinese market for medical devices is changing rapidly, creating new opportunities for companies with technology not available in the country.

That was the message from a panel of experts at Advamed 2012 in Boston, the annual conference of the Advanced Medical Technology Association (Washington, DC).

"China now provides about 95% of its people with some kind of basic insurance coverage," said Yuanli Liu, director of the China Imitative of the Harvard School of Public Health. China has spent 127 billion renminbi ($20 billion) in the last three years on insurance premium subsidies and healthcare infrastructure at the community levels. In 2003, only about 30% of the population had some level of health insurance.

Demand for healthcare products has been doubling about every five years and will continue to grow rapidly even if economic growth slows down. One factor is an aging of the Chinese population. "That's bad news for the economy, but good news for healthcare," Dr. Liu said in a panel discussion titled "China: The Changing Business Environment for Medical Devices".

One of the government's goals is to increase the quality and usefulness of rural and other secondary hospitals.

Primary hospitals in urban centers are overcrowded because many Chinese distrust other healthcare centers. Dr. Liu said that medical staff at some of those facilities even has to wear helmets to protect themselves. Most growth will come in private hospitals. The goal is to boost the percentage of private hospitals from 8.4% to 20% within six years. Expansion plans for public hospitals will be limited.

Another goal of the Chinese government is to significantly improve rehabilitation facilities. He said there are currently about 20,000 workers in Chinese rehab centers, while about 350,000 are needed. The number of beds available needs to grow four-fold. "Only 13.6% of people who need care now receive it," he said.  Major improvements are mandated in China's 12th Five-Year Plan. The plan also calls for creation of national health care benchmarks and standards and investments in health care IT.

One of the challenges facing healthcare in China is finding a balance in the roles of government versus the private sector. Another challenge is to build public trust in the competence of doctors and nurses. A third challenge is that only a limited number of medical devices are now covered by insurance programs. Dr. Liu sees an expansion in coverage that will boost the market for medical devices in China.

Jiang Feng, secretary general of the Medical Device Industry in China, said that the government has invested $24 million in the development of the domestic medical device industry. He said there is plenty of room in China for unique technology. He told attendees that the best route into the market is to buy a local company to gain a manufacturing footprint and distribution channels.

He also said that the central government has strong policies on protection of intellectual property, but "the problem is local enforcement".