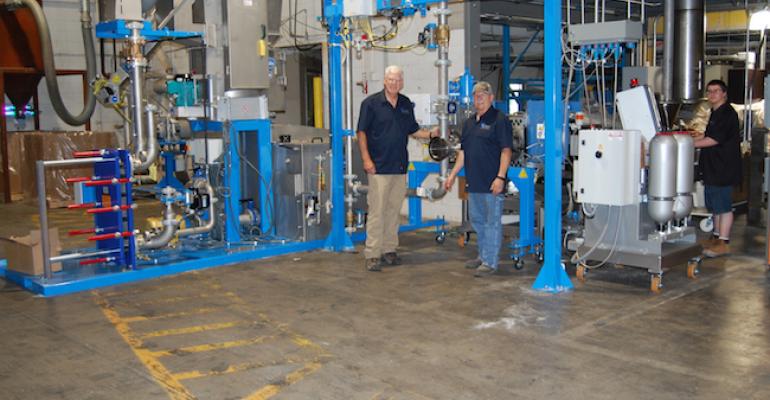 The new extruder is BPC’s second production line. It is equipped with K-Tron Coperion feeders and a Gala underwater pelletizer, all integrated by Entek on a turnkey basis. BPC plans to use the line primarily to expand its tolling business; it expects the line to increase its toll compounding capacity from 22 million to 60 million pounds annually.

Since BPC began its compounding operations in Meredosia, it has achieved steady growth. Mike Krause, Operations Manager at BPC, said, “In the past, our capacity was limited to one line; now we are able to expand our customer base. In addition to the extruder, we are adding more blending capacity as well as more trucks and off-loading equipment to handle the increased extrusion capacity. We saw a need in the market for this service and more clients are coming on board already,” he added.

BPC produces a range of compounds based on PP, PE, TPOs, TPEs and engineering polymers. Materials are formulated in a variety of colors using additives such as talc, mica, calcium carbonate and flame retardants. Founded in Houston in 2007 to conduct testing services for major chemical companies, BPC moved to Illinois in 2012 and expanded into toll compounding.

Greg Larson, BPC’s Vice President, Business Development, said, “Toll compounding helps our customers increase their compounding capacity without having to invest in new machinery and equipment. We can do the materials production for them and provide a full range of other services cost effectively.”

Today, BPC employs 20 people and operates in an 80,000-square-foot plant with a rail-siding to handle 24 cars. The company has a compounding line with a strand pelletizer as well as lines for five-layer blown film and cast film/tape, and an injection molding machine.