LIAD Weighing and Control Systems (Misgav, Israel) has introduced a fully automated and simultaneous multi-channel weighing and mixing system for the production of new homogenous batches from an inventory of additive and resin granules. By simultaneously weighing all materials to the resolution of a single pellet, the patented ColorBlend system can significantly reduce production costs associated with manual labor, according to the company.

ColorBlend is a centralized blender consisting of up to 14 individual weighing chambers fed directly from silos or containers; a common funnel and automatic manifold distributes whole batches to the appropriate extruder. Designed for granular raw materials including resins, additives and base-masterbatch colors, ColorBlend simultaneously weighs the raw ingredients within the individual chambers, and then releases the entire batch into the common funnel.

ColorBlend eliminates the need for blender sterilization, and facilitates batch changes by blasting air under high pressure through the common funnel and distribution pipe of the manifold between each batch.

Weighing accuracy is achieved by means of a multi-step process and small load cells. The 14 individual weighing channels gravimetrically release a controlled amount of material weighing slightly less than the required batch amount from the material hopper into the weighing station.

In the final weighing phase, a proprietary feeding system with single-pellet accuracy advances the raw material into the weighing hopper until the required weight is obtained. The granules are then dropped into the funnel and manifold and passed through a mixer within the free-fall hopper located at the extruder inlet to ensure optimal batch uniformity. 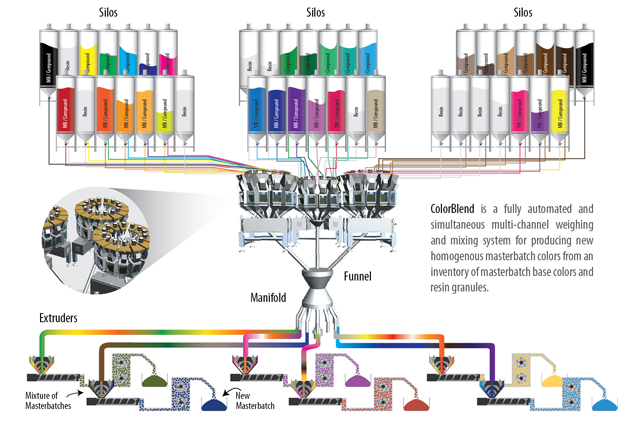 ColorBlend also supports communication among multiple systems enabling, in theory, an unlimited number of raw materials and color recipes that can be processed. For example, a masterbatch manufacturer with an inventory of 42 different base colors, resins and additives can create tens of thousands of unique colors by mixing various combinations of raw materials. In this case, three ColorBlend systems containing 42 weighing channels can be integrated together via a PC-linked controller. The three systems are raised on a platform, such that the funnel for each individual system releases the weighed material into a second common funnel used by all three systems. The complete batch is then sent to an extruder via a single automatic manifold.

In this configuration, only 12 square meters of floor space is required to accommodate the system.