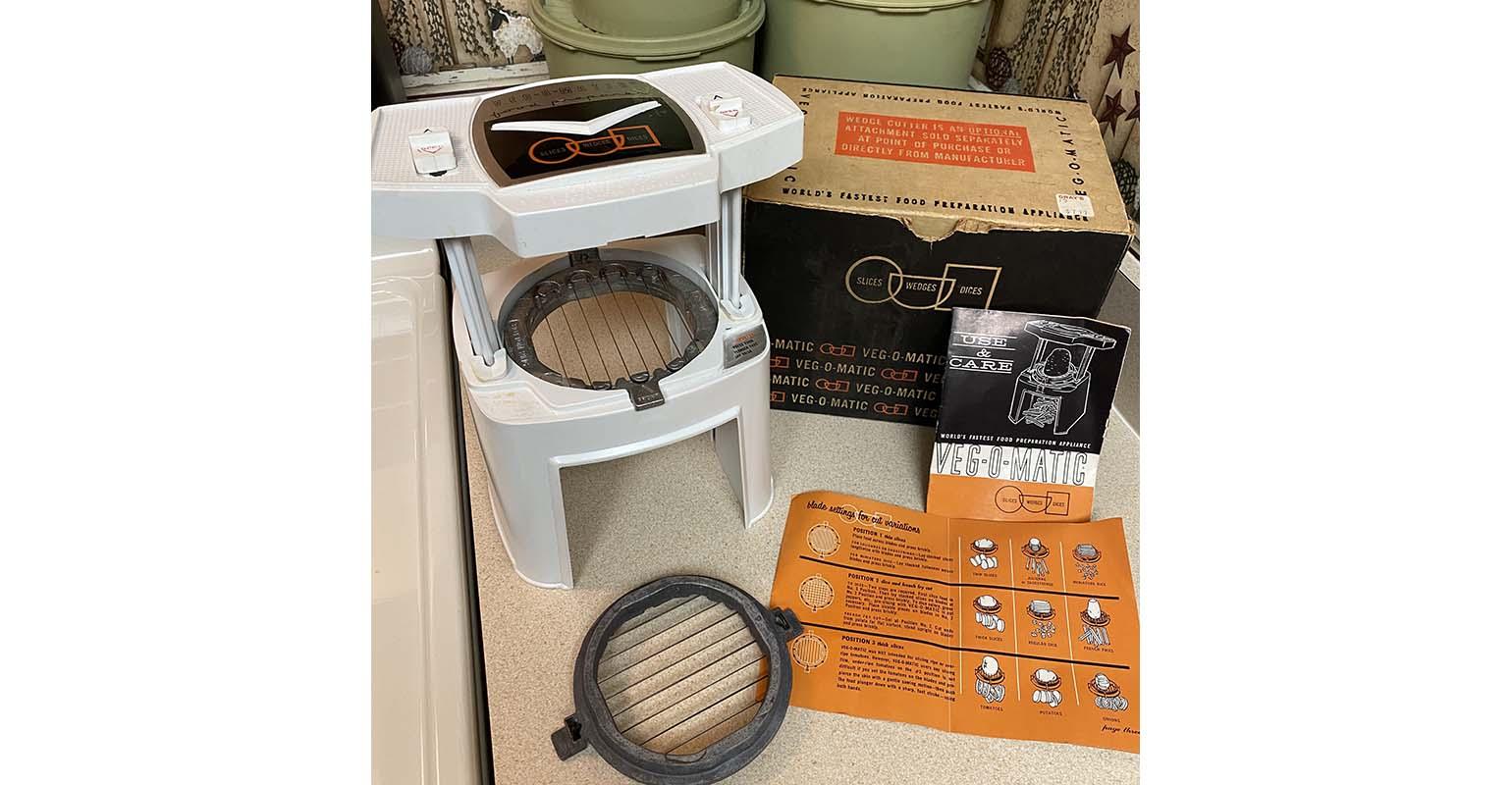 The iconic Veg-O-Matic with all the trimmings circa 1963.
The founder of Ronco and king of infomercials, Popeil popularized a profusion of time-saving kitchen gadgets, often made of plastic.

It was in the mid-1950s that kitchen gadgets and housewares made from that “miracle material” plastic began to enter homes en masse. Rubbermaid and Tupperware became household names, but perhaps no one contributed more to the popularity of kitchen gadgets — and the fact that they were made from plastic — than Ron Popeil, who died on July 28 at the age of 86.

Television was becoming ubiquitous and so were TV commercials, and it was Ron Popeil who became “America’s pitchman” with commercials that showcased his labor-saving kitchen marvels. The most famous of these – one that my mother bought – was the Veg-O-Matic. Popeil’s father was an inventor and had a manufacturing plant in Chicago, where Ron went to work at age 17, according to various obituaries. He helped to sell his father’s inventions, such as the Chop-O-Matic, the precursor to the Veg-O-Matic that made chopping vegetables a breeze. Chopping onions became a “no tears” process, for which my mother was grateful.

Popeil is credited for making popular the phrase, “But wait, there’s more!”

At the age of 18, Ron Popeil attended the University of Illinois at Urbana-Champaign, but left after only six months. He started his manufacturing company, Ronco, in 1964 and began inventing dozens of kitchen products, including the Giant Dehydrator, Beef Jerky Machine, Electric Pasta Maker, and Showtime Rotisserie and BBQ. He sold eight million units of that device, helping to propel Ronco’s sales to more than $1 billion in profits. Just goes to show that great ideas don’t necessarily need a college degree.

In 2001, he was awarded the Electronic Retail Association’s Lifetime Achievement Award.

There are a lot of tales about Popeil. I got to know a molder whose father used to mold parts for Popeil. Getting paid, it seems, was sometimes a problem, and this molder’s dad would have to shut off the presses until Popeil paid him for the parts he’d already produced.

Just looking at the large number of products sold by Ronco, nearly all of which involved plastics, I’m sure there was more than one molder and mold maker that supplied Ronco.

I guess you could say that Ron Popeil helped put plastics into the mainstream of household products, showing how robust these gadgets are and the convenience they offered to cooks in the kitchen.

Just one more example that “plastic is fantastic!”