How the little green army men marched into history 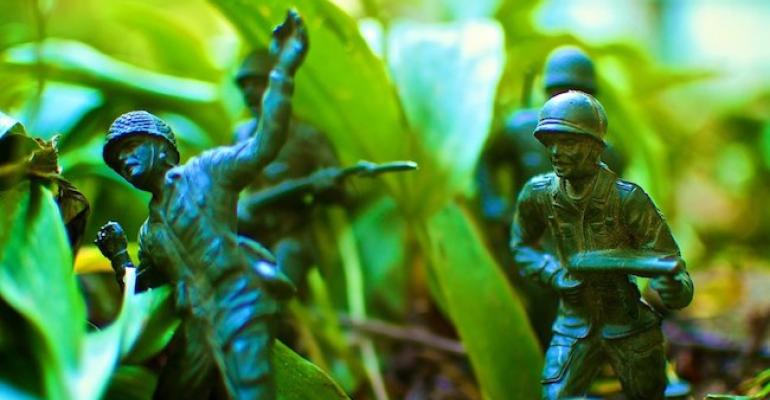 The recent announcement that the little green army men would soon welcome women warriors to their ranks got us reminiscing about the history of this iconic toy.

The recent announcement that the little green army men would soon welcome women warriors to their ranks got us reminiscing about the history of this iconic toy. Kent Sprecher, a plastic toy figure enthusiast who runs the toysoldierhq.com website, graciously shared his deep knowledge with us.

Until plastics began to enter U.S. households in the late 1930s, toy soldiers were typically made of metal. “The Auburn Rubber Co. (Auburn, IN), which made soles for footwear, started a toy division, making rubber balls and crudely painted farm figures,” explained Sprecher. “Meanwhile in New Jersey, the Bergen Toy & Novelty Co. started making toy soldiers out of Tenite, a cellulose acetate obtained from Eastman Chemical.” With WWII came rationing and metal toy manufacturing came to a halt. Bergen, which had to use scrap, became the dominant toy soldier maker, according to Sprecher.

Next: On a mission to change the parameters of playtime

After the war, plastics entered its golden age and the largest toy maker of the time, Louis Marx & Co., started molding army men and other figurines. “Lido Toys and Archer made the toy figures out of polystyrene and by 1952 or 1953, a switch was made to polyethylene, a softer plastic that formed better,” said Sprecher. Other toymakers—notably, Tim-Mee Toys of Aurora, IL, and Payton Products and MPC in New York—climbed on board, and the invasion of the molded plastic army men was in full swing. According to the Toy Hall of Fame, which inducted the little green army men in 2014, the metal to plastic conversion also changed the modalities of play.

“Because little green army men cost a pittance to make, they encouraged a kind of play that differed from the play of metal toy soldiers,” posits the Toy Hall of Fame website. “Kids lose their green figures in do-or-die battles with toy dinosaurs, space men and model railroads. Or they stage battles with lifelike explosives using the caps from their cap pistols or purloined firecrackers from holiday celebrations.”

During the heyday of the plastic army men, one innovative company, the Toy House based in Minneapolis, used a fleet of UPS style trucks to canvas the midwest, recalled Sprecher. “The trucks would have a board covered in the new sets, so when they delivered orders they would show the customers the new items, take a new order and repeat the process,” he said.

Next: The fall and rise of the little green army men

Beginning a phenomenon we live under to this day, “toy manufacturing slowly shifted to Asia in the late 1950s to take advantage of cheap labor, and U.S. manufacturers started going out of business,” said Sprecher.

Then came a foe that the little green army men were ill-equipped to combat—the peace movement borne out of the Vietnam war. Suddenly, war toys lost their appeal for a segment of the population, but not for everyone. “In 1964, Tim-Mee Toys was taken over by Processed Plastic and made a new set of what collectors call “Vietnam GI” soldiers, and they sold millions of them,” said Sprecher. “In 1980, they started putting them in buckets, which were very popular and became so iconic they were used in the movie Toy Story.” With that, the little green army men were back on the map, big time. The toy company did not fare as well, however: “Cheap copies from China kept undercutting sales, and in 2004 Processed Plastic merged with another toy company but the whole operation collapsed and went out of business in 2005,” said Sprecher.

And that pretty much brings us up to date, with the exception of BMC Toys’ announcement that it would integrate the ranks of the little green army men with women combatants starting in the fall of 2020. It’s a fitting new milestone for this decades-old iconic toy.