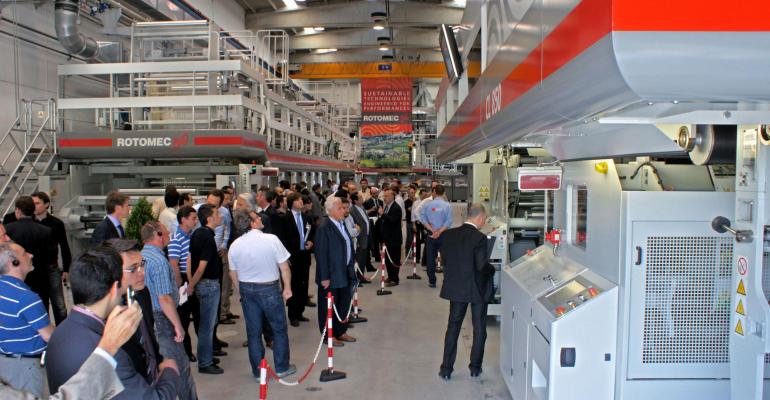 Rotomec's open house was at the company's technology center in S. Giorgio Monferrato, Italy, from June 15 - 17.  The theme of the open house, "Sustainable Technologies & Biodegradable Materials," is a hot one, naturally, and no doubt helped push the visitor attendance higher, even as the dates of the event competed with the Rosupack packaging exhibition in Moscow and with a traditional vacation week in Germany, which meant less people from those areas made the trip to Italy during the 3 days of the Open House. The company told PlasticsToday, though, that quite a few visited Rotomec the following week. In addition to seeing the gravure printing and laminating demonstrations with biodegradable materials, many converters were especially interested in the opportunity for a close look at the Rotomec SL 1000 laminator, shown for the first time, added those company officials.

Those visitors came from 21 countries for the three-days of demonstrations carried out on a RS 4003MP HS gravure press and a CL 850 laminator. The company typically holds open houses either once or twice a year.

Rotomec officials note that the use of biodegradable materials in the flexible packaging industry is still limited, but interesting these and other bioplastics is great. Rotomec officials told PlasticsToday that for plastic film conversion purposes, biodegradable and conventional substrates can be run on the same line but the type of substrate impacts the machine production speed. Bioplastic films cannot be converted at the same rate as standard thermoplastics.

Rotomec officials would not say whether they have already sold conversion equipment to processors of bioplastics films, but allowed that the use of biodegradable substrates is not widespread in the industry yet, not least because of their higher cost.

The machine manufacturer continues to work on the eco-friendly operation of it own equipment by optimizing the use and recovery of electrical and thermal power. During the open house, data displayed on screens for both the gravure press and the laminator highlighted the reduced exhaust air volume as well as the reduced thermal and electrical power consumption compared to older machines. The RS 4003MP HS gravure press demonstrated printed a typical job structure on a 20-micron biodegradable cellulose-based NatureFlex NK transparent film from plastics processor Innovia, using certified inks produced by Flint Group.

The max production speed of the RS 4003MP HS is 500 meters/min; the speed achieved during the demonstration was 300 m/min, the slower rate a result of the biodegradable substrate. The demonstration continued with an automatic splice at maximum press speed and was concluded with the screen display of the machine consumption data during the run.

The laminating demonstration of two Innovia NatureFlex compostable films - a lacquered transparent film and a lacquered metalized film - using Dow Adcotecompostable solvent-based adhesive, was run on a CL 850 D duplex laminator equipped with Rotomec's flexo-coating system trolley. The lamination with the biodegradable adhesive was a new application on which the machine maker has worked to find the optimum quantity of adhesive to obtain the best optical results for the laminated structure.

Visitors to the open house also saw in operation a SL 1000 solventless laminator, with production output of up to 600 m/min. The machine on show, which will be installed in Germany, was in a configuration suited for producing high barrier laminates.