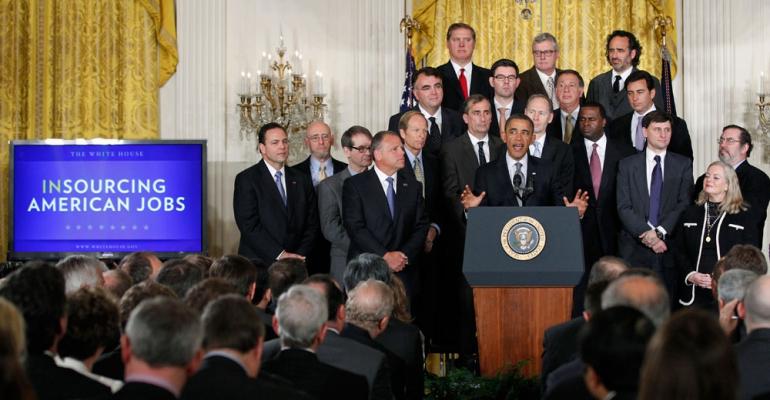 A frightening number of manufacturing jobs have been, and are being, sent offshore. The plastics industry has lost its share of those jobs. An increasing number of all kinds of these manufacturing projects is now being brought back to the U.S. Reshoring is the word coined to describe this practice and that is the topic of this article. Actually, this is more of a story about one man who is making a difference.

A frightening number of manufacturing jobs have been, and are being, sent offshore. The plastics industry has lost its share of those jobs. An increasing number of all kinds of these manufacturing projects is now being brought back to the U.S. Reshoring is the word coined to describe this practice and that is the topic of this article. Actually, this is more of a story about one man who is making a difference.

A number of factors are contributing to reshoring. One of the more important is the hidden costs of the offshore manufacturing of products that will be sold in this country.

Many industry observers have long suspected that buyers at original equipment manufacturers were being seduced by low part-cost quotations. In many cases, purchasing decisions were based on these incomplete part costs without giving consideration to the additional costs associated with offshore manufacturing.

This apparently simple method of reducing cost was widely touted in the trade press and at conferences. This created the impression that everybody was going offshore. This practice quickly became the management flavor of the month. The herd mentality took over, and the trend became unstoppable. Many OEM buyers even stopped requesting proposals from domestic suppliers. There is now some indications of a reversal or at least a slowing of the blind rush to produce everything in low-labor-rate countries. It is not likely that manufacturing in the U.S. will ever return to what it once was. However, any reversal in the offshoring trend is worth the support of everyone in the plastics industry.

With that thought in mind I recently attended a Chicago Section Society of Plastics Engineers meeting. The guest speaker was Harry Moser. I was interested in the reshoring topic, but I also wanted to reintroduce myself and catch up on what Harry had been doing. I first met Harry in 2000 while he was President of GF AgieCharmilles. The occasion was an American Mold Builders Association conference where we were both making presentations.

Harry told me that he retired in 2007 after 40 years in the manufacturing industry. After chatting for a while I concluded that the word "retired" doesn't accurately describe his current status. Indications are that he is fully occupied in a one-man effort to bring lost manufacturing jobs back to the U.S.

The sight of shuttered factories and empty parking lots motivated Harry Moser to take action. Not wanting to see the loss of any more good-paying manufacturing jobs Harry founded the Reshoring Initiative in 2010. A thorough analysis of the situation revealed that the industry observers were right. The total cost of producing products offshore is frequently not being taken into account. These overlooked costs can be a deal breaking portion of a component or product's total cost. The many buyers, who were basing their sourcing decisions on only a piece part or mold quotation, were guilty of mismanaging their company's sources of supply.

Harry started collecting case histories from companies who had experiences with offshoring and reshoring. Armed with these case studies he set out to spread the word about the dangers of offshoring and the advantages of reshoring. The large number of published articles and Reshoring Initiative quotations has not been recorded. However, Reshoring Initiative's website has had 7930 visitors.

In the last 18 month he has presented his message more than 150 times to all kinds of organizations, including technical societies and trade associations, individual companies, and politicians. These presentations attracted the attention of important people and Harry was inducted into Industry Week Magazine's Manufacturing Hall of Fame in 2010. He was also invited to participate in a day-long insourcing forum hosted by President Obama at the White House on January 11, 2012. The forum featured a cross-section of American industry leaders, experts, and cabinet level officials, who participated in a roundtable discussion with President Obama, followed by two panel discussions on bringing jobs back to America. Vice President Biden and multiple cabinet members participated in the day's proceedings. Throughout the day it was established that many American companies make sourcing decisions based on a quoted price while ignoring the total cost of offshore manufacturing.

During the morning roundtable discussion, President Obama asked Mr. Moser to explain what costs American companies often overlook in their sourcing decisions. Harry cited the largest factors typically overlooked as: (1) emergency airfreight, (2) travel, and (3) the negative impact on innovation of separating manufacturing from engineering. These and other frequently overlooked costs usually account for as much as 20-30% of a company's total cost of offshoring. The presidential forum was a great acknowledgement of Harry's work. It also drew attention to his development of a free online "Total Cost of Ownership Estimator" (at www.reshorenow.com). The Estimator provides users with a list of less obvious, but important, cost factors while reminding the user to include all of these factors in determining their true total costs. Large companies can use the Estimator in determining their total costs and the risk factors in their sourcing decisions. Smaller companies can utilize the Estimator as a sales tool to accurately reflect their competitiveness with overseas manufacturers.

Harry Moser's one-man crusade to bring manufacturing jobs back to the U.S. is ongoing. He is still eager to assist any company seeking help with offshoring or reshoring. The increase in the amount of manufacturing work coming back to America may be, at least in part, attributed to his ongoing efforts.

All thinking Americans want their country to have a strong manufacturing industry. Most bemoan offshoring, but think there is nothing one individual can do about it. Harry Moser is an example of how one person can make a difference. Most of us are not retired and we can't travel around the country lecturing on the advantage of onshore manufacturing. Every single one of us can, however, help Harry Moser carry on with his Reshoring Initiative program.

Harry needs more and more case histories of plastic parts or products, and especially molds that experienced trouble with offshore manufacturing and/or were brought back to the U.S. A lot of case histories will create the impression that everyone is reshoring. The herd mentality may then take over and the trend will become unstoppable. If your company has such a story to tell or if you know of someone who does, please share it with Harry at [email protected], or by phone at 847-726-2975. If you do, you will have done your part to help return America to being a major manufacturing country.

Reshoring Initiative is a not-for-profit organization. Harry's work is, however supported by 27 sponsoring companies and trade associations. Anyone who would like to encourage more reshoring but doesn't know how to, could become a sponsor and help finance Harry's ongoing work.

Thanks Harry. I admire you for what you are doing.