Designing packaging with "happiness inside" 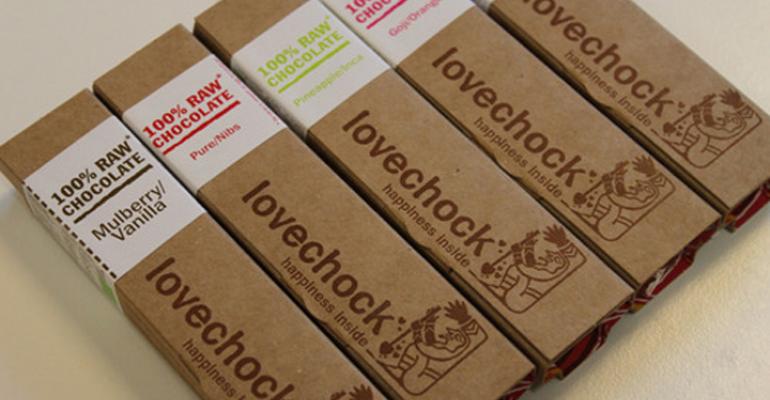 Feeling down? According to a host of studies released over the past few years, chocolate may be just what you need. Cocoa has been shown to trigger the release of various "feel-good" chemicals, such as endorphins and serotonin, which positively affect mood and energy and promote general feelings of well-being.

Feeling down? According to a host of studies released over the past few years, chocolate may be just what you need. Cocoa has been shown to trigger the release of various "feel-good" chemicals, such as endorphins and serotonin, which positively affect mood and energy and promote general feelings of well-being. Importantly, it also contains phenylethylamine, a substance popularly known as the "love drug." Which is exactly why Laura de Nooijer, a young Dutch entrepreneur in the chocolate business, named her high-quality organic chocolate bar Lovechock—lovingly made by hand with "happiness inside." 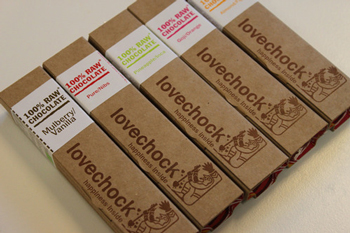 Speaking at the Bio!Pac conference for biobased packaging taking place on May 13 and 14 in Amsterdam, Ms. De Nooijer talked about how she turned her idea for a chocolate bar made of raw, unroasted cocoa beans into a successful brand with international success in the organic market. Next to what she called the magical power of love in raw chocolate, an important part of her product was the packaging, she said.

"Working with a company called ProudDesign, we originally developed a plain packaging made with PEFC paper, two plastic bands and aluminum foil. However, we felt that the aluminum wrapper and plastic bands did not reflect the spirit of the product. So we redeveloped it."

The aluminum foil was eliminated and substituted by Innovia's Natureflex film, based on dissolving wood pulp, typically sourced from hardwood species such as eucalyptus. Natureflex is certified as industrially and home compostable and is marine and wastewater biodegradable. The outer wrapper was redesigned with a tab, instead of the plastic bands, as a result of which the packaging also became reclosable. Only organic inks were used for the wrapper print.

"Raw outside, wow inside," was how Steven de Cleen, of ProudDesign put it. "Seduce first, then convince. After all, we can't compete on a biobased foil wrapper alone—we have to create a value that is bigger than the wrapper," he pointed out.

Lovechock is not just selling chocolate, it is selling a promise of happiness.

"People have an emotional response," De Cleen pointed out. "If people develop an emotional relationship with the product, they will be willing to pay for what they perceive is the added value: An all-natural luxury treat with responsible packaging that perfectly fits the product."

Note for the chocolate aficionados among us: Lovechock is milk, soy and gluten free, and it is sweetened with coconut blossom nectar, which has a low GI value (low glycemic index). All Lovechock products are 100% vegan.