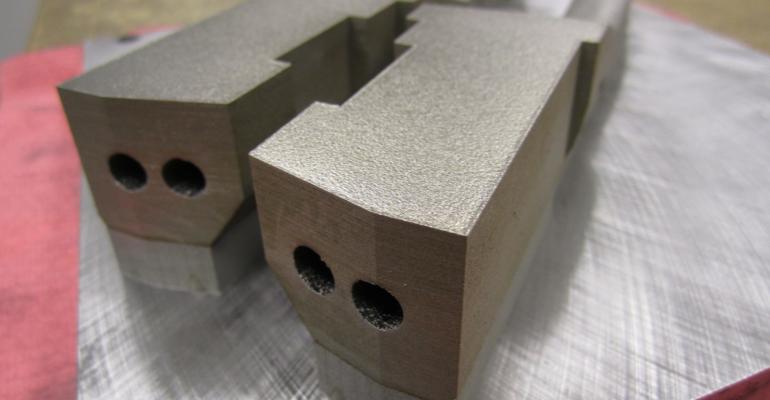 In the early days of "rapid prototyping" it was expected that as the technology advanced it would be disruptive to molded parts. For moldmakers, it might have meant fewer prototype molds if those molds weren't needed to get prototype parts. While most of that didn't come to pass in the early days of the technology, advances in what is now called "additive manufacturing" (AM) have indeed impacted metal fabrication, machining and in some cases moldmaking with the ability to "grow" various mold components.

Advancements in Direct Metal Laser Sintering (DMLS) developed by EOS, a German-based company specializing in laser-sintering systems, have made it possible to produce end-use metal components. While additive manufacturing is a key technology for e-Manufacturing that accelerates product development and optimizes production processes, the ability to produce direct metal components via AM is a game-changer for companies that adopt it.

Making core and cavity inserts via AM

John Tenbusch, president of Linear Mold & Engineering (Livonia, MI), was one of the earliest adopters of DMLS technology in the U. S., according to EOS's information. While the company specializes in the design and build of injection molds and is currently very busy in that arena, Linear Mold's DMLS business "is making us even busier," Tenbusch notes.

DMLS has made it possible to create core and cavity inserts using DMLS, quickly and cost-effectively. The inserts can cost anywhere from 10-35% more than a conventional tool insert, but the payback can be easily recouped on the cost savings in both cycle time and quality improvements. "If the tool insert design is provided with the conformal cooling channels designed and engineered by the customer, the inserts can be produced in as little as 3-5 days," explains Tenbusch. "However most projects require the cooling lines to be designed and FEAs provided, and this can add both time and costs to the project."

DMLS technology has a number of benefits for moldmakers, Tenbusch notes, but often this group tends to be slow adopters of a technology that "seems pretty far out of the box."

Linear continues to use DMLS for prototype tools by adding "grown" inserts where EDM burning may be required or for lifters and slides, and in production mold components such as subgates, slides and small cores and lifters. However, the real interest for the technology is for conformal inserts, primarily because of the cycle-time reductions companies typically get with conformal cooling technology.

"We have a large production mold we're building with 16 conformal cooling inserts, split between the cavity and core," says Tenbusch. "The customer is running other molds identical to this, and they needed the extra capacity mold to meet volume demand. Because of the complexity of the geometry on this extremely large part, they're using conformal cooling on this tool to see what kind of cycle reductions we can get."

Tenbusch says that he's seeing better acceptance of the technology among moldmakers. "At first, it's very difficult for some of the moldmakers to get on board with DMLS for conformal cooling technology from Linear, primarily because they think Linear is a competitor. We're not. We're trying to be the conformal cooling insert supplier to the mold manufacturing industry. It's spawning a new side to our business."

Jessica Nehro, Field Marketing Manager for EOS of North America Inc., comments that "One of the things we run into with moldmaking is that there's a lot of resistance to adopting a new technology in general. Often an OEM will come into our technical facility and bring their tier 1 supplier to look at a new technology, and tell them 'if we go this route we want you to get on board.' It is emerging and disruptive. On the flip side, the earliest adopters - and John Tenbusch is one of the earliest - are reaping the benefits of being early adopters."

About 85% of the molds Linear builds are prototypes and according to Tenbusch, "that area is booming like crazy - up 20% this year." Another side of Linear Mold's business is the DMLS conformally cooled inserts. While there continue to be more applications for conformal cooling, Tenbusch says that high-volume packaging applications are where he sees tremendous benefit.

"The high-volume packaging applications are perfect for conformal cooling because they typically have molds with multiple cavities and parts that are relatively small such as caps and closures," Tenbusch says.

Some of the molds Linear has built recently are to replace molds in which the parts were originally made in China and/or Korea. "Their customers required them to build molds in the U.S.," comments Tenbusch. "We were given the quoted cycle times - and in some cases we're beating those by half with the DMLS conformal cooling."

Linear currently has three DMLS machines from EOS, including an EOSINT M-270 that it installed earlier this year, and will be adding a fourth machine sometime in the first quarter of 2012. A high speed F5 Makino machining center was purchased in June of this year to do the hard-milling of the grown inserts. This provides Linear with the capability to do the finishing work on the grown DMLS components or provide them directly to the mold shop building the mold to do the finishing. The company also operates eight injection molding presses ranging from 33-1000 tons where the company performs mold tryouts and qualifications, and also does some non-automotive production molding. "Our strategy is to make Linear into a full-service niche provider," says Tenbusch.

The advantage of having in-house molding and being a mold manufacturer providing the conformal cooling channels or the finished inserts is that Linear understands both the injection molding process and mold building extremely well. "If you don't know how a mold goes together, or the problems associated with molding and processing, you may struggle making the inserts or conformal cooling channel designs that will benefit your customer. Molders and moldmakers are tough customers, so you may only get one chance," says Tenbusch.

Part of the reluctance on the part of moldmakers to use the DMLS technology is that the metals offered now are very different than what are typically used for molds in North America. Typically, North American mold manufacturers use P20, S7 or H13 materials. "The Maraging steel that is used in the DMLS process isn't well known in North America, and that's one of the biggest hurdles," Tenbusch says. "It's not a commonly recognized tooling material here, however in Europe it is used in both injection molds and die-casting applications, and is available in billet or bar form. We have found that it's not readily available in North America in these forms, is limited to certain sizes and it's expensive."

Maraging steel is an alloy that provides superior strength and toughness without losing malleability. It's similar to the stainless family, and contains nickel, cobalt, molybdenum and titanium, which makes it good for aerospace applications. For mold inserts, Tenbusch said it has been used in Europe in tools that have seen a million or more molding cycles. While Linear does not have a tool in house that has hit those types of volumes yet, Tenbusch notes that "We have some inserts that we've hit 125,000 or 130,000 shots with glass-filled nylon material without any visible degradation of the mold," he says. "We are not very concerned with the maraging material tool life. When it is hardened to 50-53 Rockwell it machines and finishes (SPI-B2) like other billet materials of similar hardness."

Commenting on Tenbusch's remarks, Morris notes that moldmakers are often required to guarantee to the OEM a certain number of shots for the mold, a certain cycle time and uptime. "If that's true, then there's not a whole lot of incentive [for the moldmaker] to be creative," says Morris. "The moldmakers are the wrong audience to go after when promoting DMLS mold inserts or DMLS conformal cooling channels. The OEMs have to drive them toward it with some type of benefit such as cycle-time reduction in conformal cooling or some reason to pursue it. Still, when I've had that conversation with OEMs about injection mold tools, they are often too risk averse to try it and throw it back to the moldmaker."