Eastman Chemical Co. has acquired Brazilian plasticizer manufacturer Scandiflex do Brasil S.A. Indústrias Químicas in part of its ongoing bid to become a leader in non-phthalate plasticizer products. Located in the state of São Paulo at Mauá, Scandiflex's 2010 sales revenue was in excess of $54 million.

Eastman Chemical Co. has acquired Brazilian plasticizer manufacturer Scandiflex do Brasil S.A. Indústrias Químicas in part of its ongoing bid to become a leader in non-phthalate plasticizer products. Located in the state of São Paulo at Mauá, Scandiflex's 2010 sales revenue was in excess of $54 million. In addition to regional diversification of both sales and manufacturing, Eastman said Scandiflex also brings several complimentary non-phthalate products to its plasticizer portfolio, which falls under its Performance Chemicals and Intermediates (PCI) segment. The non-phthalate plasticizer has more than 30 years of use in sensitive applications such as medical devices, food contact, toys and childcare articles. 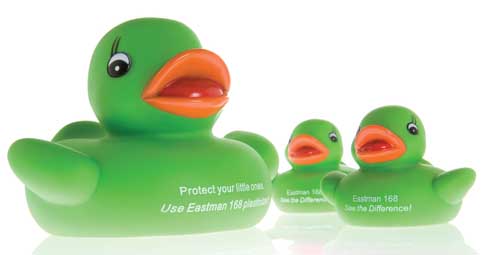 Scandiflex, which was founded in 1965, has a diversified line of polymeric and monomeric plasticizers, including phthalates, adipates, citrates, maleates, sebacates, azelates and trimellitates. Its Mauá plant, which was ISO 9001 certified in 1999, has installed capacity to produce 20,000 tonnes/yr and is being expanded to 25,000 tonnes/yr of production.

In its second-quarter earnings report, which saw sales revenue jump 26% to $1.9 billion, Eastman noted that the higher sales volume was due in part to growth in its plasticizer product lines.

The U.S. FDA expanded food contact clearance for Eastman 168 non-phthalate plasticizer in April. The Food Contact Notification (FCN) 1056 permits the use of Eastman 168 in contact with all food types at levels up to 55% by weight of the finished plasticized poly-vinyl chloride (PVC) formulations for repeated use articles.

In a 2001 safety assessment on the safety of the plasticizer DEHP's use in PVC-based medical devices, the FDA concluded that exposures to patients during some medical procedures might exceed the agency's tolerable intake level for DEHP. The U.S. National Toxicology Program noted that DEHP was of particular concern for critically ill and healthy infants, as well as toddlers and pregnant and lactating women.

The use of some phthalates has been restricted in the European Union in children's toys since 1999. In 2008, the U.S. Consumer Product Safety Improvement Act limited the amount of certain phthalates that could be present in children's toys and child-care articles. In January 2010, Australia's Consumer Affairs minister banned products containing more than 1% DEHP.