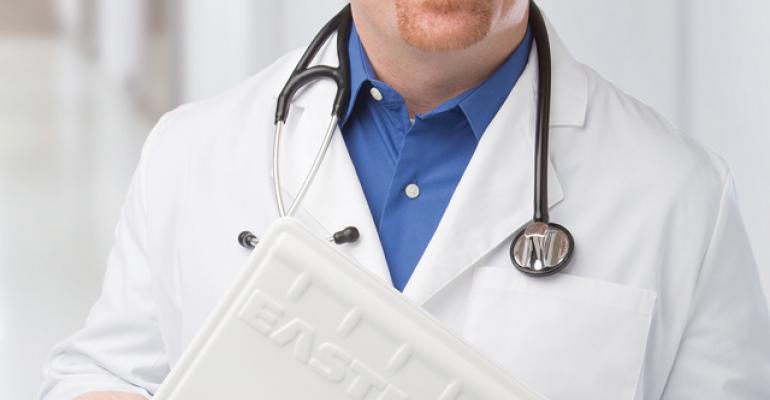 Eastman Chemical Co. (Kingsport, TN) introduced its Eastalite copolyester for opaque rigid medical packaging to the European market today at Compamed in Düsseldorf, Germany. Eastman teamed with Carolex, an extruder of plastics for packaging applications based in Longué, France, to showcase what it describes as a sustainable, cost-effective, styrene-free alternative to high-impact polystyrene (HIPS). The material was introduced to the North American market earlier this year at the Medical Design & Manufacturing event in Anaheim, CA.

Eastman Chemical Co. (Kingsport, TN) introduced its Eastalite copolyester for opaque rigid medical packaging to the European market today at Compamed in Düsseldorf, Germany. Eastman teamed with Carolex, an extruder of plastics for packaging applications based in Longué, France, to showcase what it describes as a sustainable, cost-effective, styrene-free alternative to high-impact polystyrene (HIPS). The material was introduced to the North American market earlier this year at the Medical Design & Manufacturing event in Anaheim, CA. 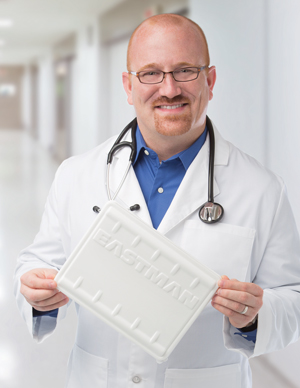 A foamed copolyester, Eastalite was engineered in response to customer feedback, Ferdi Faas, Market Development Manager, and Ian Fearnley, Associate Application Development Engineer, told PlasticsToday. "From a safety and sustainability standpoint, styrene packaging has been identified as a concern under many healthcare enterprise Environmentally Preferable Purchasing guidelines. Although sheet extruded from Eastalite can be processed with the same thermoforming, trimming, and sealing equipment as HIPS, its lower process temperatures offer greater opportunities for sustainable packaging," they said. Also, from a safety perspective, the material is used in a cleanroom environment with controlled levels of particles, a process that creates less dust than HIPS. "This makes Eastalite easier to produce and cleaner than HIPS," they added. Other advantages of the material communicated by Eastman include reductions in processing, inspection, and cycle times, compared with HIPS.

The material is best-suited for applications in which lightweighting and other sustainable attributes are part of fitness-for-use requirements. These include work-in-progress trays, thermoformed pharmaceutical packaging, and packaging for medical devices or kits, according to Eastman.

Sustainability and lightweighting traditionally have not been among the top priorities of medical device manufacturers sourcing packaging materials, but that is changing, said Faas and Fearnley.

Signs point to sustainability becoming more prevalent in the healthcare industry, according to Faas and Fearnley. "The efforts around Europe's Green Public Procurement (GPP) and North America's Environmentally Preferred Purchasing programs are great examples of healthcare systems trying to balance product needs with environmental impact. Specifically, GPP criteria recently finalized by the Swedish Environment Management Council and the European Commission were the first criteria of their kind developed for the healthcare sector," they told PlasticsToday. A recent press release from Johnson & Johnson bears this out. According to a global survey mentioned in the release, a little more than half of healthcare professionals interviewed said that their hospitals currently incorporate sustainability into purchasing decisions. This is expected to increase to 81% in the next two years.

Recycling for healthcare plastics has also become a more pressing concern, noted Faas and Fearnly. Suppliers to the device industry have formed the Healthcare Plastics Recycling Council (HPRC), which is focused on finding a viable end-of-life strategy for plastics used in healthcare facilities. Eastman has been an active member of this association, and is looking forward to supporting the collaborative effort between HPRC and the Society for the Plastics Industry's upcoming regional demonstration pilot, they noted.

As for lightweighting, which has gained considerable traction in the automotive sector, Faas and Fearnly agree that it has not been a primary driver in medical. They point out, however, that it provides medical device OEMs and their suppliers with an opportunity for designing a more economical package. "Additionally, it allows savings throughout the supply chain through improved fuel economy and, subsequently, reduced transportation costs," they said.

These attributes, plus the competitive per-sheet cost of Eastalite compared with HIPS and potential reduction in overall system costs thanks to faster processing, reduced waste, and less time spent cleaning particulates and performing inspections, appealed to Carolex. It is the first European extruder to use Eastalite to develop sheet material.

Eastman and Carolex are presenting the material and its potential medical applications at Compamed this week. The medical suppliers showcase runs alongside Medica in Düsseldorf, Germany, through Nov. 14.