Eight days that could change the course of BPA regulation in the U.S.

Over an eight-day stretch in late June and early July, bisphenol A (BPA) was dealt two potentially devastating legislative blows by California and New York, as opponents of the chemical who have grown impatient with federal regulators took matters into their own hands.

Over an eight-day stretch in late June and early July, bisphenol A (BPA) was dealt two potentially devastating legislative blows by California and New York, as opponents of the chemical who have grown impatient with federal regulators took matters into their own hands.

The first strike against BPA came on June 23, when the Senate and Assembly houses of the New York State Legislature voted unanimously to pass a bill ending the sale of pacifiers, baby bottles, cups/sippy cups, and straws containing BPA, effective Dec. 1, 2010. Only eight days later, the California state assembly passed a similar BPA ban on a 43-31 vote. After a senate vote to approve amendments added by the assembly, that bill will only need Gov. Schwarzenegger's signature to become law (although at this point, the governor has not expressed his intentions).

The California measure squeaked through the assembly by two votes, beating back the intense opposition of 17 trade and association groups, including the state's chamber of commerce and grocers association, as well as the American Chemistry Council (ACC). Deborah Hoffman, Sen. Pavley's spokeswoman said the bill will have to be taken up before the end of the legislative session on August 31. As far as whether the governor has tipped his hand on how he'll vote, Hoffman said his office had given no indication whatsoever in either direction.

Not "an uphill battle"
In a June 24 interview (listen online ) , just one day after New York state passed its ban and before California would follow suit, Steve Hentges, senior director, polycarbonate/BPA Global Group at the ACC said BPA backers have been busy of late but that the tide against the chemical could still be turned.

"I don't know if I'd say [advocating on behalf of BPA] was an uphill battle," Hentges said. "I think it's just a very busy time. I think the scientific case regarding the safety of BPA is still strong, and we have found that that resonates well with both legislators and regulators."

A PhD chemist by training, Hentges worked in the chemical industry for 18 years, with much of that time spent in health and environmental activities. For the last 10 years, he's been with the ACC—the chemical and plastics industry's largest U.S. trade group—with most of that time spent advocating on behalf of BPA, and the hard, clear plastic that utilizes it as a feedstock, polycarbonate (PC).

California and New York take matters into their own hands
California's bill, which was written by Sen. Fran Pavley, a democrat representing Agoura Hills, was originally introduced in early 2009, but then defeated in the assembly last September. Successful on its second attempt at passage, the bill, if signed, would take effect beginning in 2012. The proposed legislation would ban the sale, manufacture or distribution of bottles or cups with BPA, and prohibit the sale of liquids, foods, or beverages in cans, jars or plastic bottles that contain BPA. The law applies to items primarily intended for children three years of age or younger. 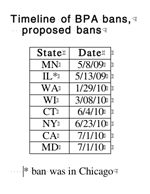 The New York bill was introduced on March 16, 2009 by assembly members Steven Englebright and Robert Sweeney and state Senator Antoine Thompson. As written, the bill sought to ban BPA from toys and child-care articles intended for use by children three years of age or under, in addition to restricting it from bottles, cups or other containers that would be filled with any liquid, food or beverage intended for consumption by children 14 or younger. It would also apply for the lining of jars, cans or boxes.

That bill passed the assembly on a 58-0 vote, and according to Sen. Thompson's press office, it contains civil penalties for violations. Thompson noted in a release that while four counties in New York state had already enacted local laws prohibiting the use of BPA, the senator's goal was to make the ban a mandatory law statewide.

In an April 12, 2010 memo, the New York State Business Council announced that it opposed the ban saying that, "BPA has been safely used to make shatter-resistant polycarbonate plastics and versatile epoxy resins for over 50 years." The council also based its opposition on the premise that such bans should come from the federal government. "The Business Council is concerned with any legislation that calls for state-specific product bans and restrictions. Chemical regulation in particular is better handled on a national level, rather than having different states with varying standards for chemical and product safety."
View U.S. BPA bans in a larger map

Impatience with the federal government
Calls like the above for deference to federal regulation of chemicals are increasingly falling on deaf ears. In between New York and California moving to ban BPA, the National Resources Defense Council (NRDC) filed a lawsuit on June 29 against the Food and Drug Administration (FDA) for its failure to act on its petition submitted in October 2008 to ban BPA from food packaging, food containers, and other materials likely to come into contact with food.

Filed in U.S. Court of Appeals for the D.C. Circuit, the suit noted that in the more than 18 months since the NRDC submitted its petition to the FDA, the agency had expressed concern about the effects of early life exposure to BPA on brain development and the prostate gland of fetuses, infants, and children but had not acted.

A representative of the FDA said it is against the agency's policy to comment on pending lawsuits, saying only that only that by law it has 180 days to respond by approving the petition, denying it, or providing a tentative response. In a June 29 response to the NRDC lawsuit, the ACC released the following statement. "The American Chemistry Council believes that the scientific process and the public interest are both best served by allowing the FDA to complete its ongoing review of the science surrounding the safety profile of BPA."

A de facto national ban?
The question now is with two of the three most-populous states in the U.S. moving close to outright BPA bans, will the chemical be outlawed on a de facto basis by companies that won't be interested in making one bottle for New York and California and another for the rest of the U.S.? For his part, Hentges called for patience and pointed towards the pending release of BPA studies from the FDA and the European Food Safety Authority. Both of which are expected this summer.

"The science of BPA has been evaluated by a number of government agencies and regulatory bodies over the last several years," Hentges said, "and there still is a consensus amongst these regulators that have reviewed the science, a consensus that BPA is safe in the way that it's being used now." —Tony Deligio