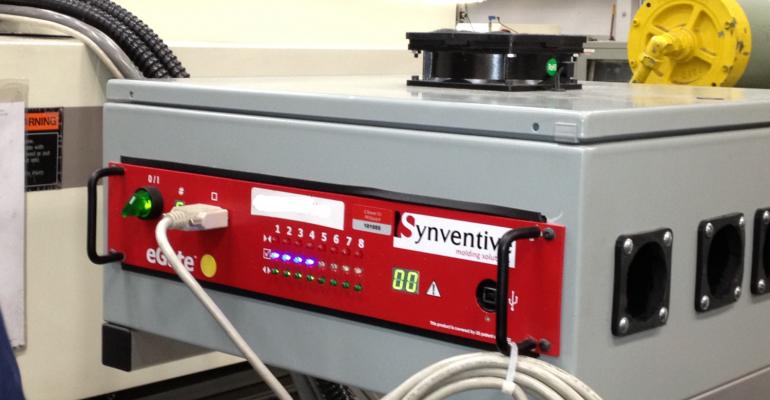 Irvine, CA—When Scott Rose described the application's geometries as "challenging", Spencer Cook could only shake his head and laugh. "Definitely," Cook reiterated. "Anti-molding 101," added Jose Ramirez. "Negative to zero draft, and if you operate in the stable part of the viscosity curve, 90% of the time, you would not make an acceptable part."

Irvine, CA—When Scott Rose described the application's geometries as "challenging", Spencer Cook could only shake his head and laugh. "Definitely," Cook reiterated. "Anti-molding 101," added Jose Ramirez. "Negative to zero draft, and if you operate in the stable part of the viscosity curve, 90% of the time, you would not make an acceptable part."

"That one particular family mold could not make acceptable parts," Cook said. "Then we put eGate on, and it worked."

eGate is Synventive's patented electronic valve gate hot runner system, introduced in November 2011. The eGate that made the unmoldable moldable was the first commercial system in use, and it came just in time for Balda | C. Brewer.

"[eGate] was of the most advanced systems I've ever seen," Cook said. "You can really do anything you want."

The problem with family molds
Back in late 2003, Balda | C. Brewer was tasked with its first family mold from the same premium optical goods customer. "The original concept was looked at as somewhat impossible," Ramirez remembered, adding that that first tool was "quite the challenge". Only after 3-6 months of tinkering and "lots of learning" were acceptable parts molded.

Running nylon 12, the family tool was to create two complete products with each shot, for six total parts with two different geometries. A family mold was chosen for the sake of 100% color consistency in the parts. When the tool first ran, the resulting parts, which needed to be cosmetically perfect, had a series of surface finish issues, including blush and jetting.

On top of that, a post-molding pull test required that there be no weld lines. Balda | C. Brewer tweaked the gate location and valve pin size, but was still unable to mold acceptable parts. The main issue was the fact that the two components have two very different sets of process needs, with one requiring a slow, gentle fill, while the other needed a faster, more aggressive fill profile.

For the Synventive eGate, with independent valve control, disparate fill profiles are handled with relative ease. "[eGate] is like having an individual molding machine behind each cavity," Cook said. "It independently controls the melt as it goes into the cavity."

Plugging in the eGate
While traditional valve gates are hydraulic or pneumatic, the eGate is electric.  Each valve pin is coupled to an electric motor with an encoder that precisely records real-time position within 0.01mm.  The valve pins are individually programmed to move as fast or slow as you want to.  A hand held pendant allows a molder to adjust gate vestige and stroke on the fly.  As with electric molding machines, eGATE provides a higher degree of precision and repeatability compared to conventional valve gates.

Out on the shop floor as once-problem parts ran successfully from the machine, Cook plugged his lap top into the eGate system and pulled up a control screen. Lights are green and red, showing whether gates are opened or closed. For this profile, there is a 6-mm open stroke. In the control, pink signifies the distance from "home", with blue showing the velocity and "speed limit" for the pin, allowing molders to set the rear zones.

The display showed the pin open at 12.5 mm, retracting at 3 mm, then opening slowly for 2 mm before speeding up for the rest of the way. The system can also save and store processes, and allow users to pull process set-up reports, giving you the nozzle, stroke length, and open position. Pin-position profiling verifies the pin's location numerically and graphically. With one system, molders can control up to eight zones. They can also daisy chain eight systems together for individual control of 64 cavities.

No limits
The problem tool is now successfully running one of the customer's most popular products. An additional mold was made and both currently produce parts 24/7 with the help of eGate. Balda | C. Brewer now has seven eGate systems-four that are 4 drop and three that are 2 drop. The company's tools are tailored to 2 and 4 drop, with the 4 drop typically used for six cavities. Since customer tooling has to be interchanged, Balda | C. Brewer leaves the eGate manifold on the machine and simply puts different molds on.

Whatever Balda | C. Brewer has thrown at the system, so far it's been able to handle it. "If you can make it run, this will let you do it," Cook said. "It's done everything I've ever asked it to do. Right now, the only limitation is me."

"Our customers says, 'Go out and make it,' and we make it," Ramirez said.