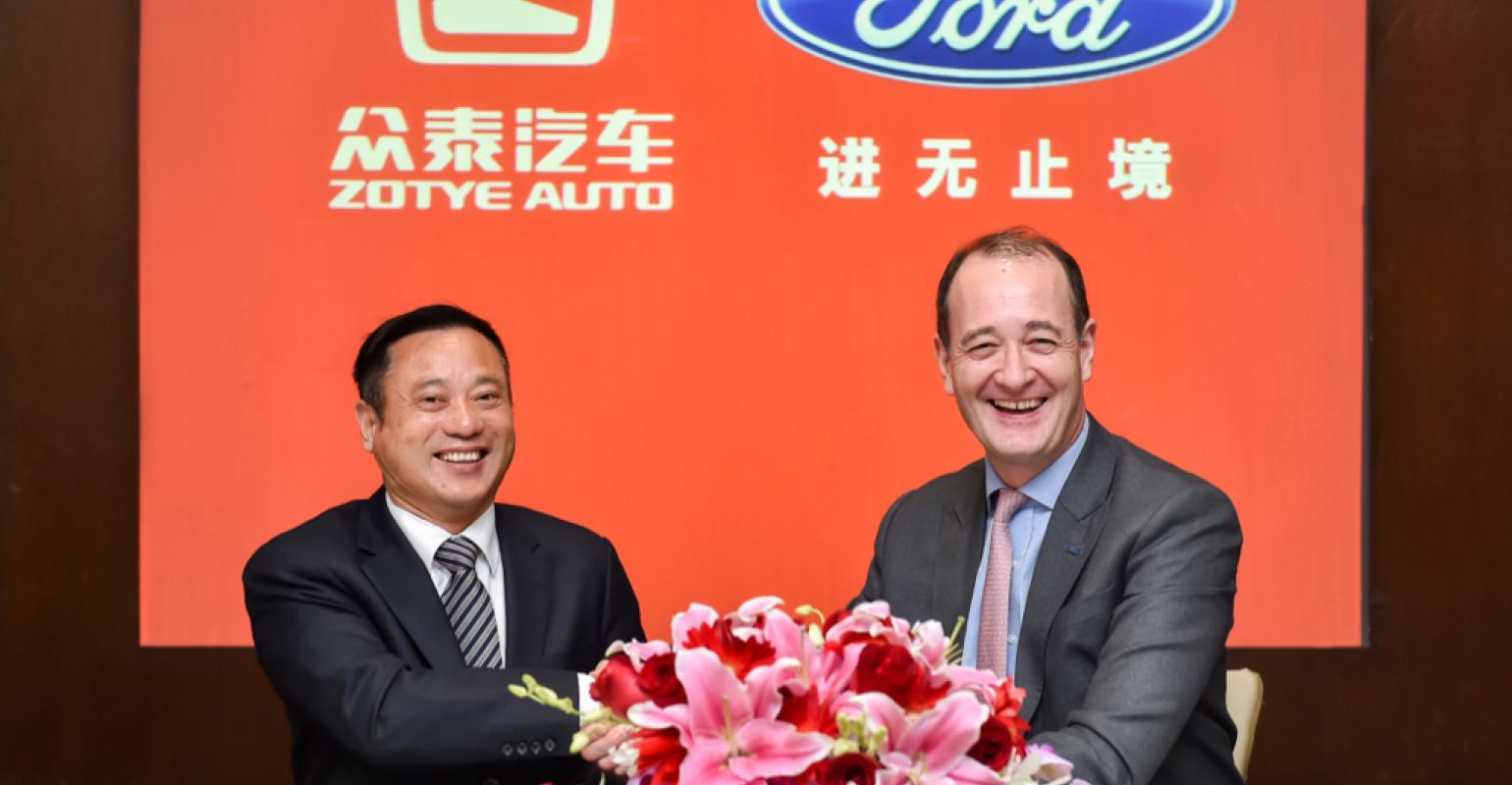 China now sells more EVs than any country in the world, and automakers outside the country want to be part of that market.

Ford Motor Co. said yesterday it is making a big bet on electric vehicles in China, promising to roll out at least 15 new electrified cars in that market by 2025.

The rollout will include plug-in hybrids from Ford and Lincoln, as well as a contingent of battery-electric vehicles through a joint venture with Chinese automaker Zotye International Automobile Trading Co., Ltd. It is part of a larger plan to introduce a total of 50 new vehicles of various types to the Chinese market over the next eight years.

The company said its emphasis on electrification is a response to the rapid changes in the Chinese auto market. “China is not only the largest car market in the world, it’s also at the heart of electric vehicle and SUV growth and the mobility movement,” executive chairman Bill Ford said in a statement.

Industry experts said the announcement is significant because it establishes Ford as a presence in the fast-growing Chinese EV market. “Clearly, this is Ford saying, ‘We’re in the game,’” Brett Smith, an assistant director at the Center for Automotive Research, told Design News. “Ford realizes that to be in the game in China, they’ll have to develop and build these vehicles.”

Ford’s announcement builds atop a joint venture agreement that it made in November, in which it said it would establish Zotye Ford Automobile Co. Ltd to build and sell electric passenger cars in China. The new company is leveraging a combined investment of $756 million. It has not offered any detail on the technology or the vehicles it plans to produce, however.

The Chinese market has recently become important to automakers because it sells more EVs than any other market in the world. China is expected to be responsible for nearly half of all worldwide plug-in vehicle sales in 2017, according to EV-volumes.com. Topping out at more than 500,000, its sales are now more than twice those of the US EV market.

The key to the growth of the Chinese market has been a major government push to sell more EVs. Local and central governments have reportedly allotted subsidies worth up about $15,000 per vehicle, according to a recent article in the Financial Times. In large population centers, Chinese consumers also have little chance of obtaining license plates for new gas-burning cars, creating a mandate of sorts for EVs.

For reasons such as those, and because there is a requirement for manufacturers to have Chinese partners in certain industries, automakers outside China have begun to form joint EV ventures. Earlier this year, Renault-Nissan signed an agreement to partner with state-owned Dongfeng Motor Corp., while Volkswagen said it would team up with state-owned JAC Motors. Ford, Renault-Nissan and Volkswagen are just three of the 200-plus companies that have announced intentions to build and sell EVs in China.

For automakers, the question is whether China will remain committed to its policies long enough to build a foundation for its EV market. Earlier this year, when the country temporarily put constraints on its subsidy programs, sales dropped. After the constraints were subsequently removed, sales resumed. “There were almost no sales in January and February, so everyone thought it was going to be a down year,” noted Christopher Robinson, an industry analyst for Lux Research Inc.. “But here they were in Q3, selling twice as many EVs as any other country.”

Most observers believe, however, that China will remain committed to its policies, at least for the foreseeable future. “There’s not a lot of indication that China will change course,” Smith told us. “They’ve been pretty strong on this.”

The EV Trend Is Now Irreversible

Senior technical editor Chuck Murray has been writing about technology for 33 years. He joined Design News in 1987, and has covered electronics, automation, fluid power, and auto.