By any measure, the technical symposium organized by injection molding technology company Engel (Schwertberg, Austria) at its Corona, CA, showroom on Jan. 13 was a success. More than 100 people attended the event, which included several presentations on such top-of-mind topics as Industry 4.0 and molding innovations in the morning followed by machine demos in the afternoon. Attendees showed keen interest in the topics, as many of them peppered presenters with questions.

By any measure, the technical symposium organized by injection molding technology company Engel (Schwertberg, Austria) at its Corona, CA, showroom on Jan. 13 was a success. More than 100 people attended the event, which included several presentations on such top-of-mind topics as Industry 4.0 and molding innovations in the morning followed by machine demos in the afternoon. Attendees showed keen interest in the topics, as many of them peppered presenters with questions. 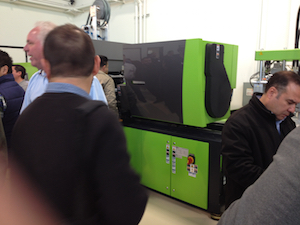 Markus Lettau, Western Regional Sales Manager of Engel's North American operations, welcomed attendees with a brief overview of Engel. He emphasized the commitment to innovation of the family-owned company, which is under the leadership of the fourth generation of Engels. The billion-dollar company annually invests €80 million in research and development and €50 million in the company itself, he noted, and the fast lane program is one example of how this benefits customers.

The company has made a concerted effort to improve its performance in terms of meeting customer expectations in today's fast-paced manufacturing environment. Customer perception of the company has been that it is not as nimble as it should be, acknowledged Wolfgang Degwerth, Vice President of Sales and Service, Engel North America. "So, we pushed all of our departments to find ways to accelerate processes," he told attendees. "Now, we can really ship machines in as few as two days," he stressed.

Degwerth also provided an overview of what Engel calls Inject 4.0, a subset of Industry 4.0, a German concept that offers a vision of the factory of the future articulated around the Internet of things (IoT) as well as a point of differentiation with companies in emerging economies that rely purely on cost as a competitive factor.

"How many Internet-connected devices do you think you have in your home?" Degworth asked attendees. "The average is 40," he said, noting that the number took him aback at first until he started counting the laptops, mobile phones, DVRs, smart TVs and sundry other connected devices in his home. "In five years, that number will be 400," he said. Industry lags behind consumer electronics, but Industry 4.0 aims to close that gap. This is especially true in Europe, but it is also gaining traction in the United States, because it makes technology easier to use, thus providing companies with some relief as they wrestle with a shortage in skilled labor, and exponentially improves flexibility. Industry 4.0 will bring us to the fabled lot size of one, noted Degworth. Engel is already providing some of the benefits to its customers, he noted, through its apps and remote analytics. Predictive maintenance, he added, is coming.

Later that morning, Joachim Kragl, Director of Advanced Molding Systems and Processing, explained in some depth how smart monitoring via Engel's iQ software reduces operator involvement in the setting of molding process parameters and reduces part deviation through constant, real-time adjustments. Kragl spent some time detailing the newest iQ product, which it introduced at Fakuma in October 2015: iQ clamp control. "It's a scientific way to set clamp tonnage," he explained, that determines the optimal clamping force for each application by calculating what is called "mold breathing." During the injection process, pressure from the inflowing melt causes the mold to open at micron levels. The software accounts for this variation in mold breathing in real time and prevents flashes or burn marks that may result from it.

Following the lunch, Engel demoed some of its machines, including its e-mac line, which is available through its fast track program.