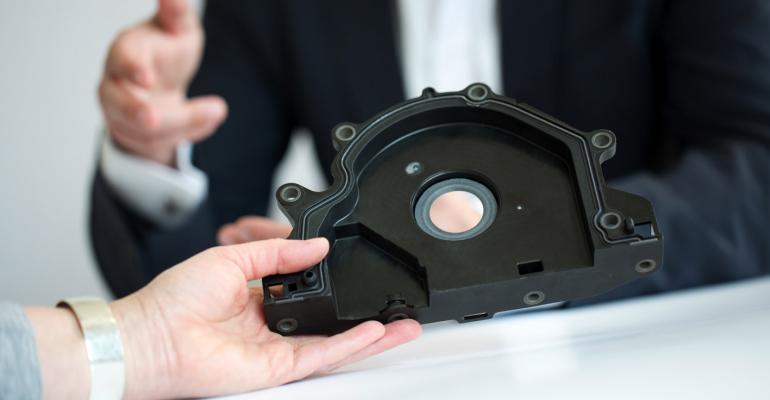 A lightweight multi-functional crankshaft cover in molded from a bio-based polyamide (PA) 410 has been adopted by the latest generation of diesel engines developed by the Volkswagen Group. The EcoPaXX PA resin in question was supplied by DSM Engineering Plastics (Singapore) and molded by KACO GmbH & Co. (Heilbronn, Germany).

A lightweight multi-functional crankshaft cover in molded from a bio-based polyamide (PA) 410 has been adopted by the latest generation of diesel engines developed by the Volkswagen Group. The EcoPaXX PA resin in question was supplied by DSM Engineering Plastics (Singapore) and molded by KACO GmbH & Co. (Heilbronn, Germany).

The crankshaft cover incorporates integral seals in PTFE and liquid silicone rubber (LSR), as well as various metal inserts. It will be used on Volkswagen's new MDB modular diesel engine platform, implemented across its Audi, Seat, Škoda and VW brands. Volkswagen, along with all major automobile producers, is in a constant search for new ways to increase the sustainability of its products, and the new bio-based crankshaft cover is a good example of solutions that it is implementing.

Compared with covers made in aluminum, system costs for the PA 410 cover are reportedly considerably lower, thanks in part to the use of an integrated, fully automated production cell for the component at KACO. Weight has been reduced considerably too, since the EcoPaXX grade is 45% less dense than aluminum.

DSM's EcoPaXX polyamide 410 is 70% derived from renewable resources, and the polymer is certified 100% carbon neutral from cradle to gate. In component production, KACO uses the highly energy-efficient production cell to not only mold the crankshaft cover, but also integrate two separate seals: the first, in PTFE, is placed into the mold by a robot, and EcoPaXX is over-molded onto it; the second, in LSR, is then molded directly into the part using a 2K process. This results in reduced energy consumption during production, as well as zero material waste. Finally, because the finished cover weighs so much less than an aluminum version, it makes the vehicle run more efficiently.

Thermoplastic crankshaft covers are still uncommon, with polyamide 6 or 66 currently being the favored material when they are molded from plastic. The very tight dimensional specification of the VW version, as well as the high loads it has to withstand, made the challenge of producing it in thermoplastic particularly severe. DSM and KACO reportedly met the challenge, thanks to the overall exceptional performance of the EcoPaXX grade-its very good mechanical properties at elevated temperatures, in combination with excellent toughness, make it an ideal material for the required high performance under extreme use-and KACO's skills in integrating static and dynamic seals into the part in a highly intelligent way.

Andreas Genesius, head of project management at KACO, emphasizes the importance of the waste-free production process. "The part comes out of the injection molding cell ready to be assembled onto the engine block," he says. "No trimming is necessary at all. By taking a holistic approach to automotive part design and production, we are contributing to sustainable technological progress without any compromise on part performance or competitiveness."

Genesius adds that a key to the successful launch of the crankshaft cover after an extremely short development period was the strategic joint development with key partners, including DSM, in the areas of part design, material development, process design and bonding of the different materials.

Fiber orientation, the number and position of gating points, and the design and integration of the various inserts have all been optimized in the crankshaft cover to minimize warpage and ensure tight seals between the cover and the engine block and oil sump. The cover also has to resist tightening of bolts fixing it to the engine block and the sump (each of which is built to different tolerances), as well as from tools used to fix the position of the FEAD (front end accessory drive) belt. With its excellent mechanical properties, DSM's EcoPaXX reportedly provided the answer to these requirements. DSM and KACO expect to obtain more business for this sustainable solution.