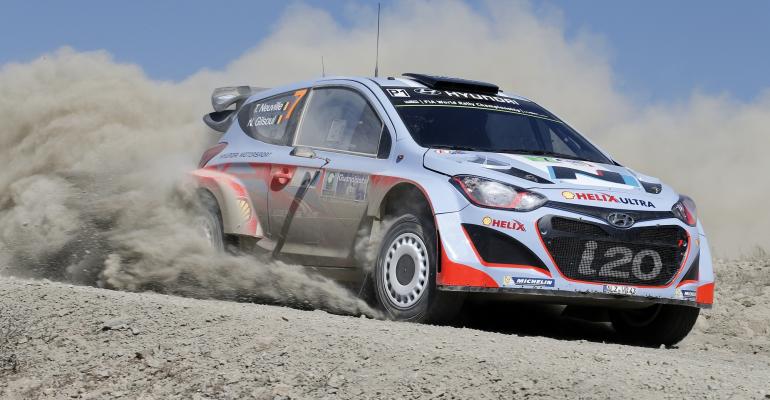 Neopolen P reportedly combines low weight with high energy absorption, which remains largely unchanged even after multiple impact loads. This is why the material has already been used previously for safety-critical components in standard cars, for example for steering column padding, fenders, headrests, and knee pads. Furthermore Neopolen P displays isotropic deformation performance and - an essential factor in motorsport - it is resistant to chemicals and oils.

Another crucial advantage for use in the Hyundai i20 WRC is reportedly the functional reliability of Neopolen P across a wide temperature range. This means that the Hyundai Motorsport drivers can rely on Neopolen P in the hot Rally Australia just as much as during the Rally Sweden where temperatures can be as low as -25°C.

The World Rally Championship (WRC) is a rally series consisting of 13 events around the world fixed by the Fédération Internationale de l'Automobile (FIA), the international association of motoring organizations. It claims to demand the highest technical and driving standards from drivers and constructors and can trace its roots back to the Monte Carlo Rally, which was first staged in 1911.

Each rally car is a production-based car. In the case of Hyundai, it is the subcompact i20, which has been modified in accordance with the FIA rules. In the side doors, the windows have been replaced with polycarbonate panels and the standard door fittings have been removed so that the side impact protection can take up as much space as possible and provide optimum protection for the pilot and his co-pilot. Neopolen P has been specifically licensed as one of the materials for this purpose by the FIA.

Neopolen P consists of expanded, primarily closed-cell foam particles. The particles, which are supplied in the form of loose beads, are processed using automatic foaming machines to produce molded parts in a wide range of different shapes and sizes. They are used in a variety of industries, in particular in automotive construction, in packaging and in air-conditioning technology.