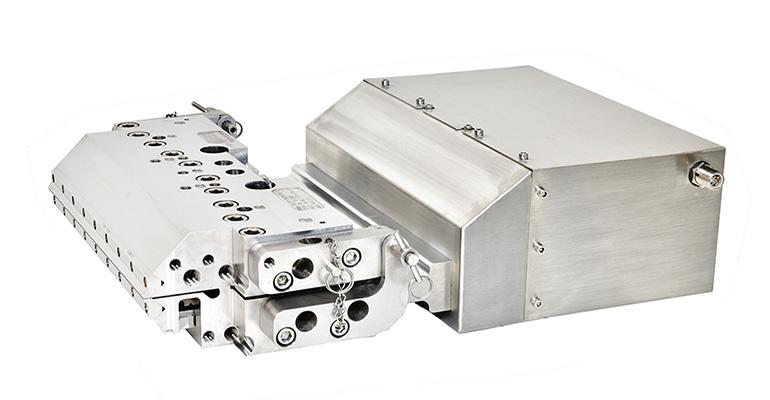 During initial tests, Nordson EDI technicians successfully closed the lip by 0.015 inches in 35 seconds. It would have taken about 15 minutes to accomplish accurately using a conventional die.

Nordson will introduce an automated lip adjustment system for its EDI extrusion and fluid coating dies at K 2022 later this month. The new technology reportedly is a marked improvement on several levels over conventional thermal bolt systems.

“When we spoke with global customers, it was clear that they need more than excellent product uniformity — they need increased automation,” said Scott Smith, Global Product Managing Director for Nordson’s EDI die business. “When skilled workers are hard to find, straightforward process control with less operator intervention is key to increasing a production line’s overall profitability. We knew there must be a better way.”

After an initial concept was developed and specified, Nordson selected the Proflow family of actuators by Honeywell’s Process Solutions team to bring the new Prodigi die to market. Instead of using thermal bolts to control the lip adjustment, the Prodigi die relies on a series of motorized actuators connected to the die’s flexible lip. The installed actuators smoothly translate motor rotation into precise linear movement to locally open and close the lip. Accomplishing this away from the hot die, at a user interface, results in a faster, safer, and more energy-efficient process, according to Nordson.

Nordson put the system through a series of extrusion and fluid coating trials at its EDI Technology Center in Chippewa Falls, WI. A series of extrusion trials were also conducted at the Fulton, NY, laboratory of Davis-Standard LLC, which has been one of the EDI business’s preferred partners for several years.

“We achieved great results when we evaluated this new technology,” said Sam Iuliano, EDI Chief Technologist. "During our initial lip gap setting trials at Davis-Standard, we successfully closed the lip by 0.015 inches in only 35 seconds. With a conventional automatic die, this procedure would involve using feeler gauges and iterative manual adjustments, which takes about 15 minutes to complete with reasonable accuracy."

The first round of tests at Davis-Standard, using multiple LyondellBasell resins and an NDC Technologies scanning system, also clearly showed the advantages of the Prodigi system when it comes to both product uniformity and control speed.

"We set the desired lip gap, and when we started, the initial thickness variation was +/- 25%. Within 44 seconds, the thickness variation decreased significantly, and after only three minutes from engaging Automatic Profile Control (APC), we had an almost perfect gauge over the complete length of the die,” said Iuliano. “This compares to an average of 12 minutes to achieve the same tolerances using conventional thermal actuators. Customers will save significant time and be able to exactly repeat their production cycles. This will create much less scrap and add more productive time since final tolerances are achieved so quickly.”

Ricky Keller of Davis-Standard was suitably impressed. “I have witnessed step changes in APC over the past 40 years and the Prodigi system is definitely a large step forward for profile control of flat dies,” said Keller.

Iuliano added that launching a saved lip profile recipe from a previous run produced exceptionally flat film in only 30 seconds. “Davis-Standard stated that they usually need eight minutes to achieve the same tolerances from recipe launch with conventional thermal actuators.”

A game changer for converters, per Amcor

Global packaging supplier Amcor was also invited to the development trials. “The performance of the Prodigi die, with its reproducibility and speed, will be a game changer for converters,” said Brent Martins, R&D Fellow with Amcor. “We are always looking for tools to help reduce losses and improve our Overall Equipment Effectiveness as we move toward shorter run sizes. This new technology from Nordson will enable converters to achieve these goals safely and efficiently,” said Martins.

Nordson claims that under normal use and on an annual basis, the Prodigi system would consume less than 1% of the electricity needed to operate a comparable thermal die bolt system.

Nordson and Davis-Standard will provide brief technical presentations on Prodigi systems and the development trials during K 2022 at booth E91 in hall 1. The K show runs from Oct. 19 to 26 at Messe Düsseldorf in Düsseldorf, Germany.