Extrusion Basics: All the Light We Can — and Cannot — See 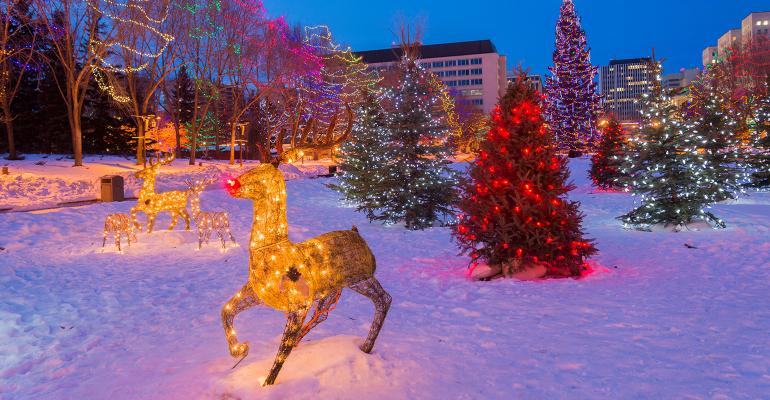 As we celebrate the season of light, here’s a look at the perennial importance of managing light transmission, haze, gloss, and color in extruded products.

December 21 is the shortest day of the year for everyone in our northern half-Earth. This is because the Earth is tipped at an angle as it moves around the sun. On this day it's tipped away the most, so it gets the least solar energy — fewer hours and a lower angle. (Memo to flat-earthers: That case was argued and decided by Columbus, Magellan, and Galileo a very long time ago).

People knew the days would get longer after that, which meant more sunlight, so they had holidays that celebrated light, such as the Jewish Chanukah (186 BC), the Christmas star in the east (0 BC), and the Indian Diwali, origins way, way back, some involving light. Some follow the lunar calendar, but the moon doesn’t cooperate with fixed days, so the times of these holidays will move around our calendar each year.

If you want to go to cities with the same day length as Bethlehem, try Savannah, Georgia; El Paso, Texas; or Shanghai. Or Baghdad or Jerusalem.

The lighter side of extrusion

What does all of this have to do with extrusion? In a word, light. In many extruded applications, optics are important — light transmission (clarity), haze, gloss, and color. Although there are standards, such as ASTM D1003, and exact descriptions of color, the quality of light varies so much that we must be very careful in specifying, formulating, combining layers (co-extrusion), and comparing products.

Light moves through air and space, and an explanation is beyond this article and fortunately beyond our needs as plastics processors. That’s transmission, too, but I’ll talk here about how light is transmitted through our plastics (clarity).

Such transmission and haze depend on crystallinity, which is how the molecules fit together as a solid. That may depend on cooling rate, so you can affect clarity by adjusting the cooling rate or with certain additives that affect the crystallization rate or crystal size. Molecules that don’t fit well may not crystallize at all, and the polymer stays amorphous (transparent), like PVC, PS, and a few others. This violates the image of “crystal clear,” but that’s the way it is with polymers. Non-matching surfaces of the crystals bend and diffuse the light, so lots of tiny crystals mean it’s not as clear as a single crystal would be.

Some polymers, such as ABS, are naturally opaque, but there may be some transmission even for them. Polyolefins (PE and PP) are partially crystalline — and how much matters, relating to density. PET is unusual — cooling rate matters — and if you use it, get more details on how to get and keep the clarity you want.

Light source is critical for any comparison. Daylight is not standard, as we can see if we are up on a sunny morning vs. a gray and cloudy one. And evenings are different, too. The artist Monet was fascinated by this: See his series of 30 (!) paintings capturing the Rouen cathedral at different times of the day. Even commercial lighting is not uniform, and before you agree to match a customer’s color sample, agree on the source and enclosure for comparison, and take photographs. Makers of color concentrates are experienced, and that is a reason to use them (also, for mixing and sometimes cost).

Gloss is an optical, but measures light that bounces off a surface, not transmission/haze, and the light source and especially the angles are important. Commercial glossmeters are available.

Remember that light and heat are connected in sunlight, which is why a black car will feel hotter in the sun than a white one with the same gloss.

And additives. Mineral fillers will make the product opaque but there may still be some transmission. Particle size is important, not just what the filler is. And so is mixing: A 1983 SPE paper (Kovach) showed that better mixing allowed savings by getting the same color and opacity at 3% vs. 4% of less thoroughly mixed concentrate.

Color is defined by the wavelength of what we see. It is transmission if we’re looking through the plastic, so we alter color with dyes that are soluble in plastic (and don’t break down in process heat, a problem with early efforts to make blue PET water bottles). But color can be reflection — what isn’t absorbed if we are looking at the plastic. White reflects all equally, black absorbs all equally. Silvery metallics (plastic tinsel) reflect but do so differently, and may have more gloss. Pigment particles reflect and absorb depending on what the pigment is. Iron oxide reflects black or brown (rust) depending on how much oxygen is bound by the iron (ferric vs. ferrous).

The visible wavelength range to humans is between around 400 to 750 nanometers. It is often expressed in Angstroms (10 Angstroms = 1 nanometer). Anders Ångström was a Swedish physicist (1814-1874). These wavelengths seem very small but our brains not only see them but separate them and see the longer ones as red, shorter as orange, then yellow, blue, indigo (a plant), and violet. Even-shorter wavelengths are invisible ultraviolet, and carry enough energy to darken skin and break polymer bonds (remember — how much matters). Longer than visible are infrared, which warm-blooded animals like us emit by radiation and, thus, can be seen by cameras that can sense this part of the spectrum. Anyone studying art — watercolors, oils, acrylics — will learn to mix colors, including whites, blacks, and browns. To the rest of us who deal with colors, try it.

Pigments are usually minerals like titanium dioxide and rust (iron oxide). Some of these may be toxic in large and free amounts, like cadmium or lead. Just because there is something “in it,” shouldn’t mean anything bad until you see how much, how available, and how much is needed for how much harm. Sounds responsible, but people will often avoid the numbers they don’t — or don’t want — to know. (Study the Flint, MI, case.)

We processors can screw it up, too. Polymers have limited thermal stability, and if kept too hot for too long, they will start to degrade, break chains, and become yellower. This may be harmful, or not, and can explain why a product looks different with the same compound when run on a bigger line where material stays hot longer. It can be countered by running a cooler melt, if possible: Keep the head/die cooler, a static mixer, stabilizing additives, keep air (oxygen) away from just-emerging surfaces. Sometimes you can just ignore it if other performance features are OK.

Around now, we are seeing a lot of light displays. Less power is needed with LEDs, and they produce a large variety of colors. One color need for an up-to-date Santa sleigh (in addition to clean, white snow) is a glowing red nose for Rudolph. Story by Robert May in 1939, music by Johnny Marks (May’s brother-in-law), and sung by dozens of professionals, especially Gene Autry in 1949, back when people bought records. No color standard, a good story to make the special and different feel useful, which helps the drivers (the Santas) as well as the receivers of the elf-made presents (us). A story doesn’t have to be true to have meaning, and the tale of Rudolph is a prime example.