Fear of plastics, and what to do about it 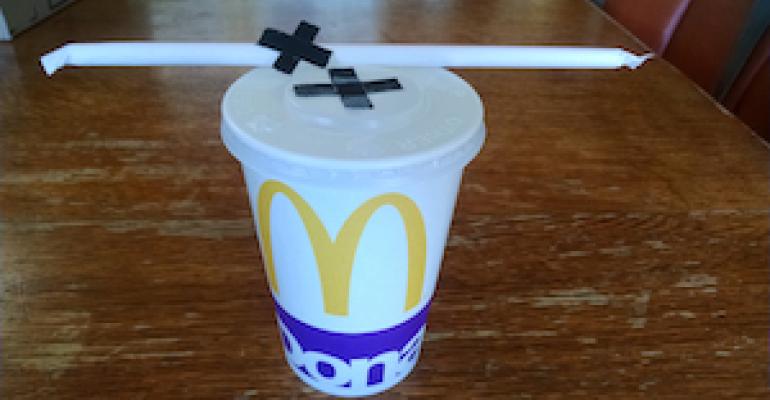 Reporting on McDonald’s elimination of plastic straws in the UK and Ireland, CNN repeats a litany of clichés on the “evils” of plastics.

I typically begin my monthly column with a reminder that there are no toxic plastics. The material's negative public image is a result of plastics being seen as corporate, variable and science-based. This has led to bag bans and other restrictions, often based on the visible presence of litter. But the belief that plastics are toxic in and of themselves has become mainstream, as seen in CNN’s reporting that McDonald’s will stop using plastics straws in the UK and Ireland. No matter that paper substitutes are bonded with plastic. No matter that anything reusable risks bacterial contamination. Plastics are bad for us, and the CNN article included repetition of the “more plastic than fish by 2050” meme, and the lead illustration (plus a 1.5-minute video) reinforces the image of fish eating the plastic and us eating the fish and somehow getting poisoned in the process.

The corporate origin of plastics is clear enough but easily defensible. Large corporations bring us efficiencies of scale that otherwise would be impossible. They carry their problems, to be sure, but until I see some better and more viable way to get low prices and ample supply of quality products to consumers, I’ll support their existence as well as their serious regulation in a truly competitive atmosphere.

Variable refers to the myriad forms and formulations of our materials. They are not seen as “natural,” like paper, metal, glass or wood. No matter that there are many metals and woods—to the public, iron is iron and pine is pine. No matter that “natural” includes such evils as snake venom, poisonous mushrooms and all the bad bacteria and viruses that afflict us, and that synthetics are often our remedies. Plastics are made by people, and people can’t be trusted to have all humankind at heart while they are driven to make profits, which is not a dirty word, by the way, but represents interest on borrowed money, as I learned in high school. (Speculation and accumulation are relevant topics but too much to get into here.)

We can do something about variable by more standardization of our virgin resins as we’ve done with recycle codes, so people can know that PE 1A meets certain standards, PE 1B meets others and so forth, and that suppliers really adhere to those standards (meaning serious enforcement). The public doesn’t have to know in detail what the standards are, as long as we feel there is some predictability to the materials, that they can’t be altered at will and that the standardized products are harmless. Not easy, but possible.

It’s the science-based connection that raises the most trouble. People are uncomfortable with science in general and chemistry in particular, as science challenges the impossible. There are basic laws and law-abiding reasons for everything—we may not know them all and may never know them all, but there are no miracles. The impossible is . . . impossible.

This is uncomfortable to people who need a belief in miracles for their sanity and social existence, which includes some part of all of us. Animals don’t think like we do; they can feel pain and joy, but they don’t think into the future (I’m sure someone has tried to show they do, but I’m mainstream here). We do, and the belief in miracles pervades our lives, often in the form of hope and peace in the face of terrible events and surroundings.

As long as people are free to think, they will be uncomfortable with the scientific basis of plastics, and will feel relieved with the image of their toxicity. In simpler terms, we want to believe plastics are bad for us, as such belief supports our fear of the miracle-busting essential nature of the sciences. It gives us something to be scared of. It also supports our reluctance to change our lifestyles—to restrain/restrict our consumer society enough to change our habits and social behaviors. From there, I leave it to the sociologists and psychologists, but I won’t sweep it under the (synthetic) rug and pretend it isn’t there. That would be “make-believe,” and I am too much of a scientist to do that.

OK, how does all this affect the extrusion world, beyond bags and straws? These single-use products have borne the brunt of plastophobia, but anything is fair game to the fearful. House siding has its plastophobic enemies (see the movie Blue Vinyl), and the widespread belief that degradables are better promotes their use, devaluing recycle streams and raising product costs (and, hence, price). And polystyrene foam has also been under attack, both in the form of cups and molded beads.

An indication of the level of un-knowledge is the CNN reporter’s comment that straws can’t be recycled because they are made of a combination of PP and PS! They can be made of either material (most are PP, never a mixture) but the recycling problem is more a matter of collection than material selection. All this may be interesting, but CNN's readers and viewers will just see the image: plastic = no recycle = bad. They won't be recycling the paper-based straws either, but this alternative is seen as degradable (less so with the PE or other coating needed to bond the paper and make it water resistant). How well-meaning people can want degradable plastics in our soil and water, and still believe that plastics, degraded or not, are toxic, is beyond my logic but not theirs. Logic, like beauty, is in the eyes of the believer.

Most uses of plastics are not single-use (pipe, automotive, agriculture, textiles, electrical including wire insulation, appliances, electronics) so plastics will have plenty of uses and, although short-term pricing may fall because of overcapacity, the world is essentially one market now, and producers will adapt to consumption, whatever the rate of growth is or isn’t. Personally, I don’t expect much economic disruption because of the fear of plastics, but I’d keep an eye on what’s happening just in case. I’m a scientist at heart and at mind—they are not opponents but partners—so I believe what I see and not vice versa.

Griff will present a live seminar in Amherst, MA, on July 11. Seminars in your plant are also available. If you can’t attend his live events, he offers a Virtual Seminar, which can be seen at any time, anywhere. E-mail Griff at the address listed above for more information.