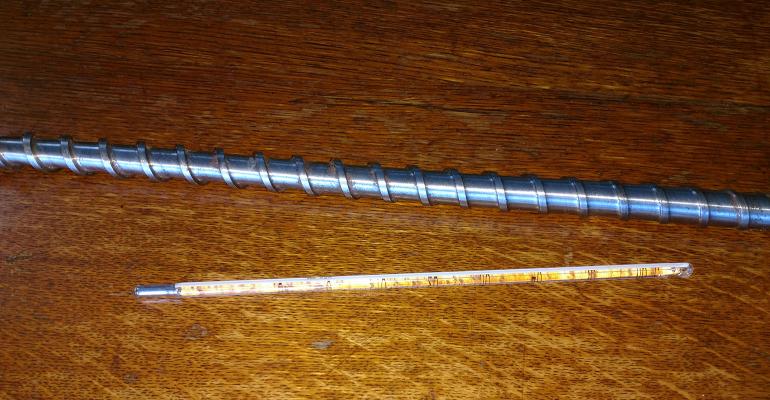 A thermometer is pictured with an extrusion screw.
Here’s one tip: Avoid too-hot melts during extrusion, which degrade the plastic, a common limit to production speed.

Physics is a turn-off word for many, as it sounds like the science education subject that it is. So people say, “It’s for them, we don’t need it” or “We couldn’t understand it anyway.” But physics involves things we all deal with every day — heat, light, sound, motion, and more. Getting the basics doesn’t require special training but does require some curiosity and resisting the human need for magic and the impossible.

No such thing as cold

We think we know what heat is. Maybe we even know that there is no such thing as cold — things are just hotter or cooler. That’s a good start. Temperature is a measure of how fast the molecules are moving. No molecules, as in space? No temperature. All motion uses energy, and heat is a form of energy, so the more energy that gets into a mass of molecules, the faster they move and the hotter it is. Cooling means energy is taken out and the molecules move more slowly. The energy may change form, but it doesn’t disappear. Energy can come from the sun, motion, breaking atom-atom bonds, electricity, condensing steam, hot air, and more. If enough energy leaves (cooling), all molecular motion stops and we have absolute zero, which is 273° below zero Celsius or 460° below zero Fahrenheit. It’s the same for all matter. Can’t get any colder than that.

Why two systems, C and F? Before around 1700, we didn’t measure temperature at all. If Shakespeare or Columbus asked about the weather, he’d get an answer in the vein of, “It’s very cold today, Will” or “Muy caliente, Capitán Colón.”

In the early 1700s Daniel Gabriel Fahrenheit, a German who lived in Holland, knew that mercury was liquid at room temperature and expanded with heat. He was a professional glassblower, so he made a glass tube with a very thin passage, got the mercury inside, and made the first thermometer, following a principle noted by Galileo 100 years before. He announced it in London in 1724 and the British adopted the system, using a scale from 0 to 100! With this scale, body temperature was 90 (it’s 98.6) and freezing water was 30 (it’s 32). Some think 100 and 0 were set as the hottest and coldest temperatures possible in Amsterdam. Or his tube wasn’t perfect. Whatever the reason, the British liked it, brought it over to the colonies (that’s us), and we’re still using it 300 years later.

Back in Europe, Anders Celsius, a Swede, wanted a more precise scale. In 1742, he proposed the freezing and boiling of water at sea level as 0 to 100, which became the centigrade (Celsius) system for the non-British rest of the world. In Fahrenheit, water at sea level boils at 212° and freezes at 32°. Neither scale works at high altitude — water boils at 202°F (94°C) in mile-high Denver, because the air pressure is lower and the liquid molecules need less energy to escape (boil) and become gas (water vapor = steam).

The role of heat in extrusion

We need heat to melt the plastic. We get most of it from the resistance to the motor turning the screw(s) in the barrel. Exceptions that need significant barrel heat are small machines, any machine that runs slowly, twin-screw extruders, extrusion coating, and some specialty high-temperature resins.

Plastics don’t have sharp melting/boiling points like water — all the molecules are not exactly the same, as they are in water. They do have melting ranges, which are known to processors, and glass-transition temperatures (Tg), above which they are tough and stretchable and below which they are glassy and brittle. These Tg temperatures are mainly used by researchers and polymer makers.

The melting range is above this transition temperature, and the melt gets less viscous (thinner) as it gets hotter. We need to avoid too-hot melts that would degrade the plastic (break chains, discolor, weaken, contaminate) and this is a common limit to production speed. If barrel and head/die are kept too cool, more motor power is needed to convey and push out the melt, which puts more heat back into the melt. If we run too hot, however, it may degrade directly. Time at high temperature matters, too, which is why a big extruder may show degradation of the same material that ran OK at the same conditions on a small line. Cooling capacity matters, and may also be a rate limit.

Measuring temperatures and other variables

Extruders need to set conditions — temperature settings on the barrel, head and die; maybe a pressure setting if that is controlled; and an idea of desired screw speed. We don’t usually run at top screw speed, as there are many other limits. We measure motor amps and screw speed, also melt pressure at or near the screw tip. We should also measure melt temperature in the head, which is not the same as the controlled metal temperatures (the conditions) but tells us when melt is too hot.

In principle, we could put a mercury thermometer into the extruder head to get melt temperature, but in practice we use a thermocouple, as we do to control the conditions. A thermocouple is a pair of wires of different metals, joined at both ends to make a circuit. When one end is hotter than the other, a small current flows in the circuit and can be measured, converted to temperature units, and displayed.

I would expect processors to want maximum thermal stability from resin makers and compounders. This is a result of polymerization — catalysts, reaction rate, and temperature — and can be further improved by additives (stabilizers, antioxidants), and also processing aids (viscosity reducers that require less power from the motor). But additives usually cost more than the resin itself, which means AMAN-ALAP (As Much As Necessary, As Little As Possible). It helps if you are already adding colorants.

Can we test incoming materials for thermal stability? Yes, but it’s not done often enough. A torque rheometer is useful with PVC compounds, and other plastics, too. Oven discoloration is used, also chemical tests, but suppliers should agree on what they are responsible for.

There are three ways to transfer heat:

Often, two or all three of these are working together. You can also change the form of energy without adding any, such as charging a battery or human sweating (liquid water to water vapor, 539 calories/gram).

Power, heat, and energy are not the same: Power is HP or kW, heat is degrees F or C, and energy is Joules or KW-hour or calories. Melting needs energy, too: 80 cal/gm for water, less for anything else.