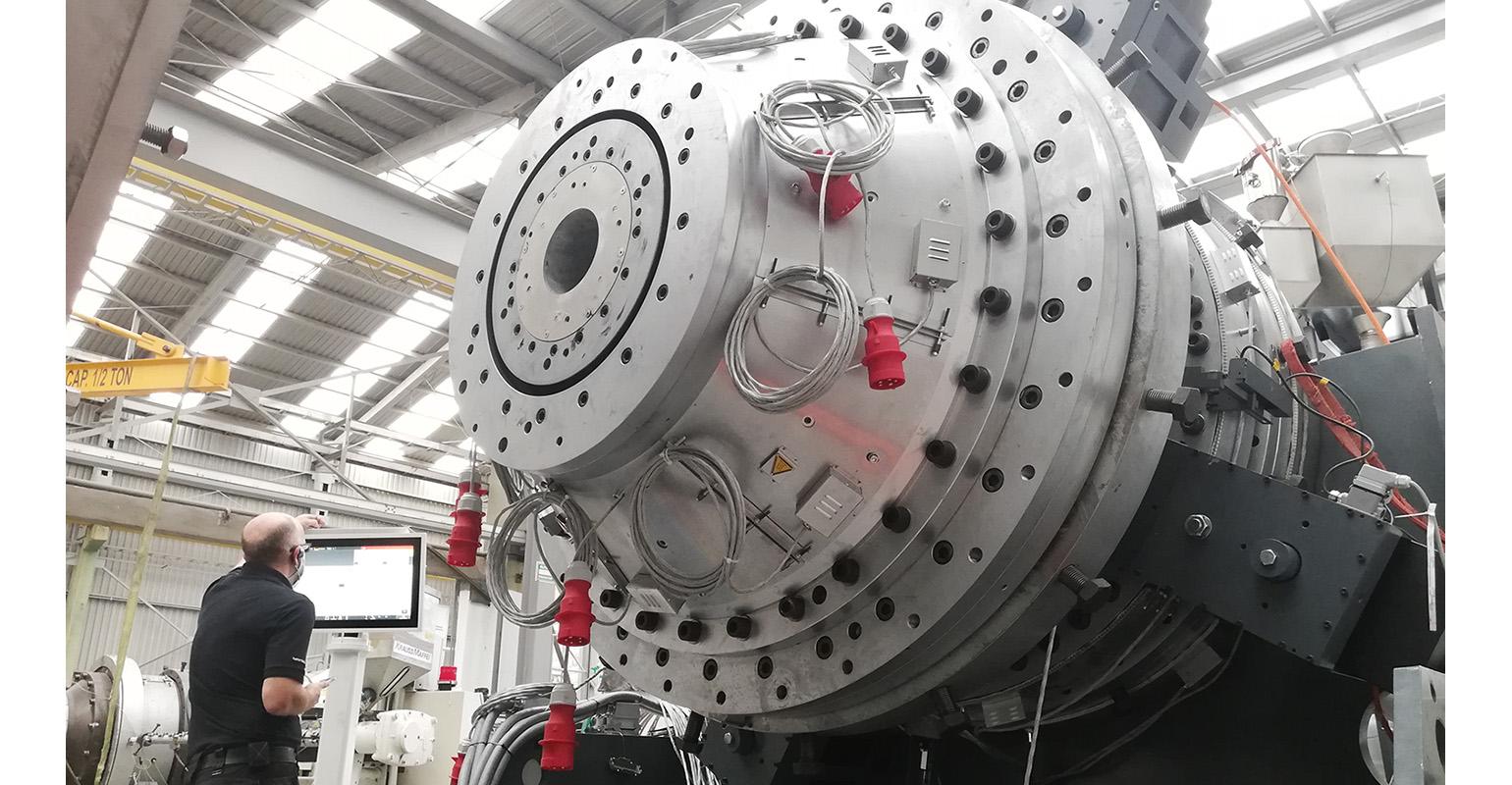 The extrusion line from battenfeld-cincinnati can rapidly and flexibly produce pipes in diameters up to 1,600 mm without requiring die changeovers.

Extrusion technology company battenfeld-cincinnati developed the fast dimension change (FDC) system several years ago and has successfully marketed it for pipe diameters ranging from 160 to 250 mm (6.3 to 9.8 in.), 200 to 355 mm (7.9 to 14 in.), and 400 to 630 mm (15.7 to 24.8 in.). The system has now been implemented for the extrusion of pipes measuring up to 1,600 mm in diameter by Policonductos SA de CV, based in San Luis Potosí, Mexico. The large-diameter pipe extrusion line contains a die with the largest melt gap ever produced, enabling the production of pipes in a range of diameters without conversion. There are no comparable systems on the market, claims battenfeld-cincinnati.

Battenfeld-cincinnati introduced the world’s largest adjustable melt gap for pipe dies at K 2019 in Düsseldorf, Germany. The die was developed for Policonductos, which was impressed by the dimensional flexibility provided by the adjustable melt gap. “We are absolutely enthusiastic about the range of options offered by this new line,” said Homero Garza, General Manager, Policonductos. “We have not only been able to expand our product range to include large-diameter pipes, but we can now also produce pipe dimensions to individual customers’ specifications without any problems.”

In addition to the new die, the line is equipped with a solEX 120 NG extruder and upstream and downstream components. Policonductos extrudes high-density polyethylene pipes for fresh water supply, sewage disposal, and mining applications in dimensions ranging from 406 x 12.5 mm to 97.1 x 1.651 mm (16 x 0.5 in. and 3.8 x 0.06 in.)

An adjustable melt gap allows the pipe manufacturer to produce varying pipe dimensions on its line and to respond fast and flexibly to market trends, explained battenfeld-cincinnati. It takes little more than the push of a button to switch the die to a new pipe dimension. A major advantage is safe handling. Conventional extrusion lines require die changes when there is a size change, which increases production time but also is a safety hazard because of the large pipes being processed. These drawbacks are completely eliminated with the FDC system, said battenfeld-cincinnati.