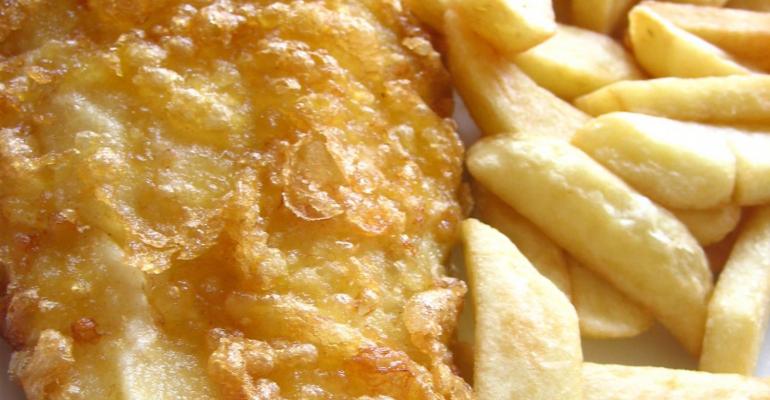 Waste oil from cooking fish and chips and other fried foods makes an excellent feedstock for manufacturing an up-and coming bioplastic. That's according to a new British research report that eyes use of the plastics in microcapsules for drug delivery in cancer therapy and also as medical implants because of its biodegradability and non-toxic nature.

Waste oil from cooking fish and chips and other fried foods makes an excellent feedstock for manufacturing an up-and coming bioplastic.

That's according to a new British research report that eyes use of the plastics in microcapsules for drug delivery in cancer therapy and also as medical implants because of its biodegradability and non-toxic nature.

"Our bioplastic-producing bacterium, Ralstonia eutropha H16, grew much better in oil over 48 hours and consequently produced three times more PHB than when it was grown in glucose," said Victor Irorere, a researcher at the University of Wolverhampton. "Electrospinning experiments, performed in collaboration with researchers from the University of Birmingham, showed that nanofibers of the plastic produced from oils were also less crystalline, which means the plastic is more suited to medical applications."

Polyhydroxybutyrate (PHB), part of the polyhydroxyalkanoates (PHAs) family, was discovered in 1926 by Maurice Lemoigne and was originally developed by ICI, transferred to Zeneca, sold to Monsanto and then sold to Metabolix. PHAs occur naturally in many organisms, but genetic engineering processes are also be used to tailor their production in cells.

PHB is an aliphatic polyester that is being produced by bacteria in large fermenters that process glucose or starch, typically from corn in the United States.  Beet sugar is the major feedstock in Europe. Its physical properties are similar to polypropylene.

"Unfortunately the cost of glucose as a starting material has seriously hampered the commercialization of bioplastics," said Iza Radecka, who is leading the research. "Using waste cooking oil is a double benefit for the environment as it enables the production of bioplastics but also reduces environmental contamination caused by disposal of waste oil."

Metabolix opened 50,000 tons per year plant in Iowa with Archer Daniels Midland in 2010 to produce Mirel brand PHB from corn in a joint venture called Telles. ADM withdrew from Telles earlier this year and the plant closed. The economics of the operation collapsed when demand was slow to develop and corn prices rose.

Danimer Scientific expects to begin construction at the end of this year on a 200 million pound-per-year PHA plant in Bainbridge, GA with the goal of offering bioplastics at around $1/lb, which is significantly less than the price of Mirel. Target applications are in packaging and coatings, not medical.

It remains to be seen how the Wolverhampton/ Birmingham PHB can be effectively scaled up. Economic production on a lab scale is vastly different from manufacturing scale. Results of the research will be presented at the Society for General Microbiology's Autumn Conference at the University of Warwick in England.

Demand for PHA is growing 29% annually (from a very small base), with the fastest growth coming in Asia, according to a report from BCC Research (Wellesley, MA).