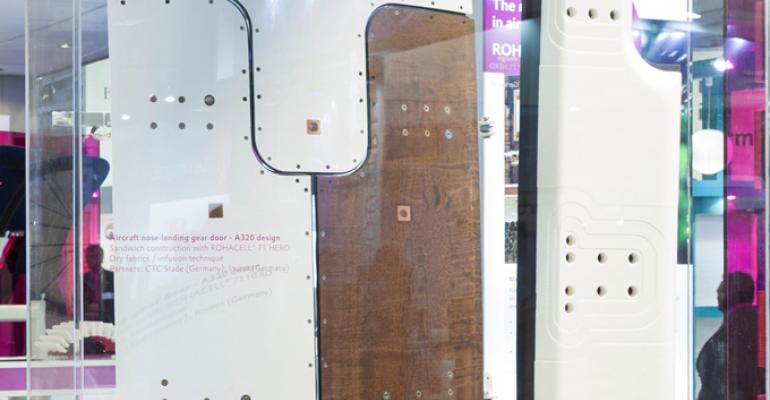 Evonik Industries (Essen, Germany) is introducing its latest product to achieve such aims: a structural foam core for sandwich components called Rohacell Hero; at the upcoming Composites Europe 2014 show in Düsseldorf this 7-9 October. The light core material has been specially developed to meet the stringent requirements of aircraft manufacturers on damage tolerance and damage visibility after impact events such as bird strike or hail. Composite components using Rohacell Hero are also significantly less expensive to produce than counterparts with a honeycomb core structure according to Evonik.

High-rigidity components commonly use honeycombs as core material. Due to the open hexagonal cells and low inherent rigidity, however, fabrication is complex and expensive according to Evonik. Foam cores, on the other hand, require only a simple one-shot manufacturing process and save on core filler or adhesive film; this reduces processing time, costs, and even weight.

A direct weight and cost comparison has been carried out with a typical honeycomb design on a nose gear door of the Fairchild Dornier Do728. By replacing the honeycomb core by a Rohacell Hero foam core and changing to an infusion process, the cost of the CFRP component was reduced by 25 percent and its weight by 19 percent.

Another issue with honeycomb structures is water accumulation in the cells during flight. The resulting increase in weight and, as a possible secondary effect, debonding of the covering layers necessitate repairs or replacement of the component. The foam design reportedly solves these problems, considerably reducing the airlines' operating costs.

The required damage visibility for, for example, hailstones, runway debris, or tool drops has been confirmed by impact tests with impact energies of up to 35 Joule, carried out by the Fraunhofer IWM Institute in Halle, Germany. Even for damage inflicted with an open covering layer and at relatively high impact energies, the damaged area remains impermeable thanks to the closed-cell R foam; this means that spreading of the damage due to water penetration and further spreading by frost, as can occur in honeycombs, is prevented. Further, in case of damage, repairing the foam sandwich is reportedly a simple matter.