If you really think that it will be another 10-15 years before the automotive industry begins using 3D printed parts in actual end-use applications, you've not seen this report from Ford Motor Co. on how the company is embracing the technology.

If you really think that it will be another 10-15 years before the automotive industry begins using 3D printed parts in actual end-use applications, you've not seen this report from Ford Motor Co. on how the company is embracing the technology.

"One day, millions of car parts could be printed as quickly as newspapers and as easily as pushing a button on the office copy machine, saving months of development time and millions of dollars," that's the projection coming from Ford Motor Co. about 3D printing technology. And the company should know. "Ford has responded quickly to 3D printing, using the technology to produce prototype parts, shaving months off the development time for individual components used in all its vehicles, such as cylinder heads, intake manifolds and air vents," the company stated.

The development of the engine cover for the all-new Ford Mustang is the most recent example of the company's use of 3D printing technology. With traditional methods, an engineer would create a computer model of an intake manifold - the most complicated engine part - and wait about four months for one prototype at a cost of $500,000. With 3D printing, Ford can print the same part in four days, including multiple iterations and with no tooling limits - at a cost of $3,000, according to a report Ford released in December.

3D printing saves millions of dollars in the product development process by eliminating the need for special tooling, 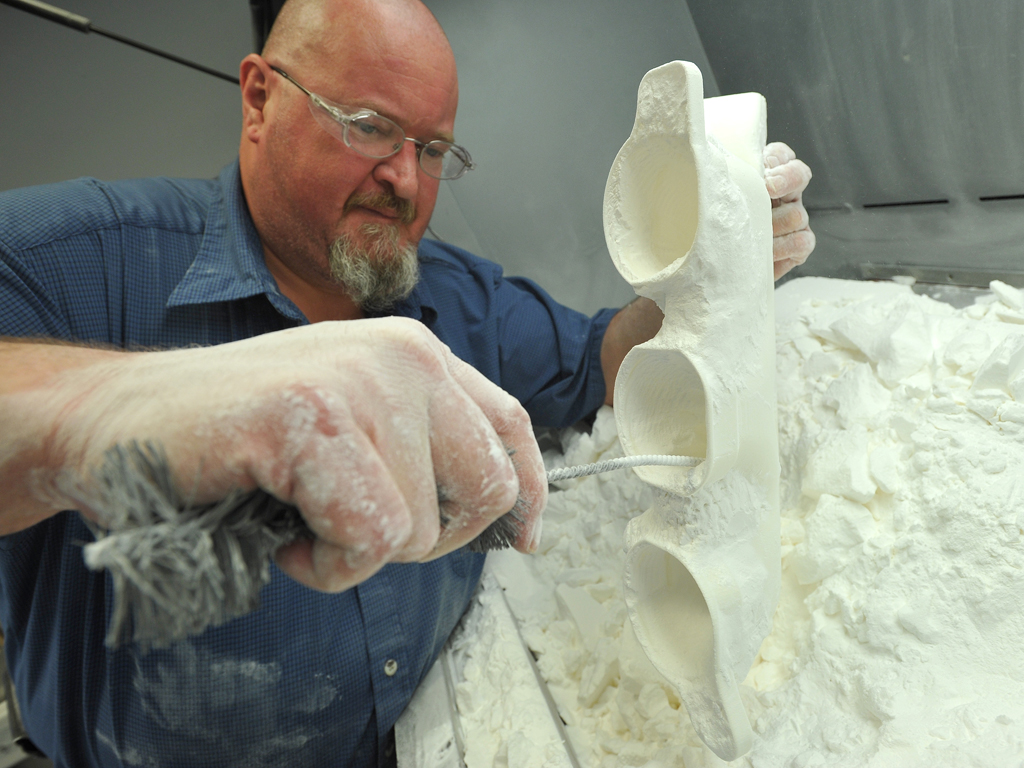 While there are still some limitations to the process, as pointed out in the article I wrote about the 3D panel on the radio talk show, those limitations won't stay that way. There will be advancements in the size of the build boxes in these 3D printers, and there will be advancements in the speed of the build that will make the technology suitable for higher volume applications. So don't think it will never happen. Today, it's the automotive and the aerospace industries that are leading the way. Others will follow.

Ford boasts that it has been "at the forefront of 3D printing for 25 years and was involved with the invention of 3D printing in the 1980s." The company bought the third 3D printer ever made, and uses a variety of 3D printing processes. Ford now is looking to what's next in its 3D printing strategy, including opportunities to print production parts in metal, rather than just plastic, for prototypes.

"Many have referenced this technology as ushering in a third industrial revolution," said Harold Sears, Ford additive manufacturing technical specialist. "While that is yet to be determined, what we do know is manufacturing is continuing to go digital, the speed of these technologies is increasing and the variety of materials is expanding - all of which leads us to believe 3D printing presents a great opportunity for overall manufacturing."

We all know that the automotive industry is pushing suppliers to do more, become more involved, provide more engineering assistance, add capacity and do everything faster and cheaper. Time is one of those commodities they're not making more of - time is about money and market share for the big OEMs, and to be a player you'll have to meet those demands.

The 3D printing train has left the station, but there's still time to catch it if you run.