The new head restraint foam supplied to Ford by Lear is 25% soy bio-based, joining the foam in the seat cushions and backs of all of Ford's North American-built vehicles in having soy polyol.

The new head restraint foam supplied to Ford by Lear is 25% soy bio-based, joining the foam in the seat cushions and backs of all of Ford's North American-built vehicles in having soy polyol. Ford says its use of bio-based foam has helped reduce its petroleum oil usage by more than 3 million lb annually, while cutting carbon dioxide emissions by more than 15 million lb. 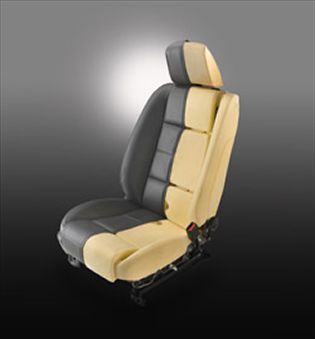 Debbie Mielewski, technical leader, Ford Plastics Research said the latest application of the soy-based foam comes in a new location and features higher soy content. "We're not stopping at head restraints, either," Mielewski said in a release. "There are still many other applications in which traditional foam can be converted to bio-based soy foam on vehicles, such as energy-absorption areas, steering wheels and armrests."

Ford and Lear have collaborated on research into soy foam for several years, with Ford first using sustainable soybean oil-derived seating foam on the 2008 Mustang, before its application in headliners for the 2010 Ford Escape and Mercury Mariner. The collaboration also generated the recent complete conversion of all Lear North American Ford seating cushion foam to Lear SoyFoam.

Lear says SoyFoam is up to 24% more renewable than petroleum-based foam and can provide a 67% reduction in volatile organic compound emissions. Ford continues to research the use of other renewable sources for foam, including palm, rapeseed and sunflower oil in markets around the world where those commodities are locally available and cost effective.

Ford has committed to increasing the use of non-metal recycled and bio-based materials whenever possible, provided these materials are environmentally favorable and meet all performance and durability requirements. In addition to soy foam seat cushions and gaskets, it has utilized wheat straw-filled storage bins, recycled resins for underbody systems, recycled yarns on seat covers, and natural-fiber plastic for interior components.

Speaking after it was awarded in the 2009 SPE Automotive Innovation Awards, Cynthia Flanigan told PlasticsToday that research started in 2002 on the foam, which was first applied in 2008 model-year Mustangs. Patents are pending for the technology that used soy-based polyol to help replace up to 25% of the petroleum-derived polyol in typical urethane foam. The soy market fluctuates, but Ford representatives have said its product is "cost neutral" with the potential savings remaining, and from an environmental standpoint, it offers a net-zero addition of volatile organic compounds. Ford will expand the technology to other vehicles and is also looking at instrument panel foams.

According to the Association of Postconsumer Plastic Recyclers, 9% of all recycled milk jugs, laundry detergent bottles, and other high-density polyethylenes ended up in cars in 2008.