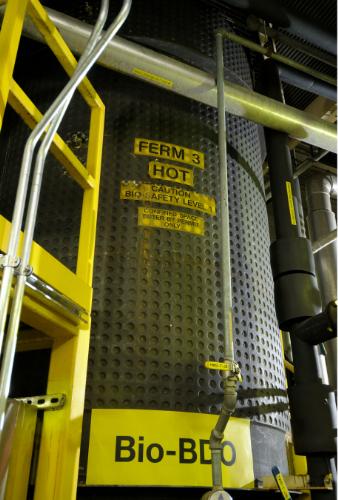 That chemical building block is an intermediate for the chemical industry that reacts with dicarboxylic acids to yield polyesters; diisocyanates to yield polyurethanes; and with phosgene to yield chloroformates, according to BASF's diols group. The main uses for BDO are in the production of cellular plastics, thermoplastic polyesters, hot-melt adhesives, and plasticizers.

Genomatica said this latest achievement comes three months after it formed the production partnership with Tate & Lyle. The company believes that continued success during the demonstration-scale stage will validate the design and basic engineering package for construction of the first commercial-scale plant. As for that milestone, Genomatica said startup should in late 2012, with what it's calling world-scale plants in the U.S., Europe, and Asia starting in 2014.

At the recent BIO World Congress conference (May 8-11, Toronto), Genomatica disclosed it had achieved 100g/liter in BDO production, more than five times greater than the result it featured in a paper published in Nature Chemical Biology. On June 10, the U.S. Department of Energy announced that Genomatica would receive up to $5.0 million in funding to create an engineered organism and optimized fermentation process to convert cellulosic sugars into BDO. The DOE noted that such technology will "enhance the commercial profitability of integrated biorefineries by enabling co-production of high-volume fuels and the higher-margin commodity chemical, BDO."

In its normal industrial synthesis, acetylene can be reacted with two equivalents of formaldehyde to form 1,4-butynediol. Using a proprietary, multi-step process, LyondellBasell manufactures 1,4-butanediol without using acetylene. The chemical intermediate can also be produced by converting maleic anhydride into methyl maleate ester, which is then hydrogenated.