German innovative strength: All foam and no beer?

Credited as being the most prosperous and competitive economy of Europe, it's hard to believe the Germans, or at least German companies, are suffering from self-doubt. Yet according to a new industry innovation index survey commissioned by specialty chemicals company Altana, a majority of the managers at German companies think they are falling short when it comes to innovative strength.

Credited as being the most prosperous and competitive economy of Europe, it's hard to believe the Germans, or at least German companies, are suffering from self-doubt. Yet according to a new industry innovation index survey commissioned by specialty chemicals company Altana, a majority of the managers at German companies think they are falling short when it comes to innovative strength.

How is this possible? Just two days ago, the European Commission published its Innovation Union Scoreboard 2014, which named Germany, together with Sweden and Denmark as an "innovation leader." This scoreboard is published annually and provides a comparative assessment of the research and innovation performance of the EU member states and the relative strengths and weaknesses of their research and innovation systems. According to this outcome, therefore, there's officially nothing wrong with Germany's innovation strength.

So what's the problem? Why are so many German managers "beset," as the Altana report puts it, "by doubts"?

Let's take a look at the main finding of the survey carried out by Forsa Institute among 250 senior managers and 250 young professionals in industrial companies across a range of sectors in Germany. The results show that, overall, however, the industrial sector rates its innovative strength as good, with the Altana study revealing an innovation index value of 142 (any value over 100 is positive) and that around 90% of industry managers in Germany believe that the innovative strength of an industrial company "greatly influences its economic success." Yet just four percent of managers in Germany rate their company as very innovative, with at many companies, important measures designed to drive innovation often failing to be implemented. This, while 41% of those surveyed believe a very high level of innovation is needed to gain a competitive edge.

One problem, says the study, is the lack of a culture of innovation at most companies. Another is that young industry professionals often feel they are working in environments that do not allow them to realize their full innovative potential.

It's an unsettling finding, to say the least. Are we to believe that Germany's much-extolled, highly admired innovation strength is nothing more than all show and no go?

According to the young professionals surveyed, only 15 percent of companies actively promote the kind of unconventional, outside-of-the-box thinking and actions needed for innovation to develop. This finding was backed up by the revelation that a mere 12% of the managers demonstrated widespread acceptance for employees who want to "break new ground at their company." What's more, tools thought to be standard for driving innovation, such as a company suggestion scheme, were found to be fully established at less than a quarter of the surveyed companies.

And while German managers understand the problems, they lack the courage to make changes, says the study. Even as they acknowledge the positive impact of innovative strength, only 17% claim to lead by example - in other words, by personally making an "optimal contribution to help drive innovation."

Part of the problem may have to do with the Germans' legendary respect for rules. Indeed, the following may be found in a text from an EU communication project called the Passport to Trade 2.0:

"In many respects, Germans can be considered the masters of planning. This is a culture that prizes forward thinking and knowing what they will be doing at a specific time on a specific day. The German thought process is extremely thorough, with each aspect of a project being examined in great detail. Careful planning, in one's business and personal life, provides a sense of security.....Rules and regulations allow people to know what is expected so that they can plan their lives accordingly....In German business culture, this is reflected in the adherence to prescribed business rules resulting in, a low degree of flexibility and spontaneity in attitudes and values. Germans do not like surprise."

These cultural traits are not to be scoffed at. They have taken the country far. Following the rules and planning for success have propelled Germany into its current position as leading European economy - even regarding its innovative strength. Nonetheless, with so many discontented young professionals, who feel they are not realizing their full innovative potential, German managers are right to be uneasy.

As Mitch Ditkoff wrote on January 30 in his blog, The Heart of Innovation- 50 Ways to Foster a Sustainable Culture of Innovation, "As far as the future is concerned, don't speculate on what might happen, but imagine what you can make happen."

Rules, after all, can only take you so far. Imagination requires, among other things, a facility to question authority, a willingness to make mistakes and the chance to make mistakes, or even fail, without fear.

That may well be. From the results of the Altana report, I'd say that the Germans have a long way to go before they'd even consider it. 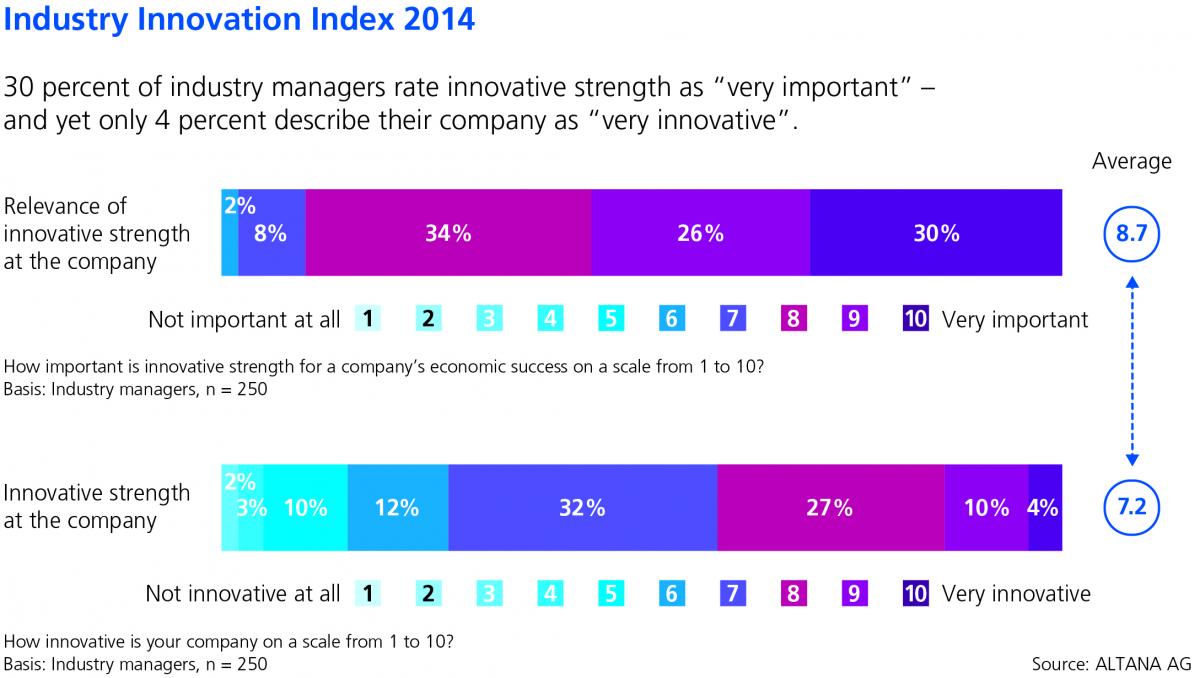 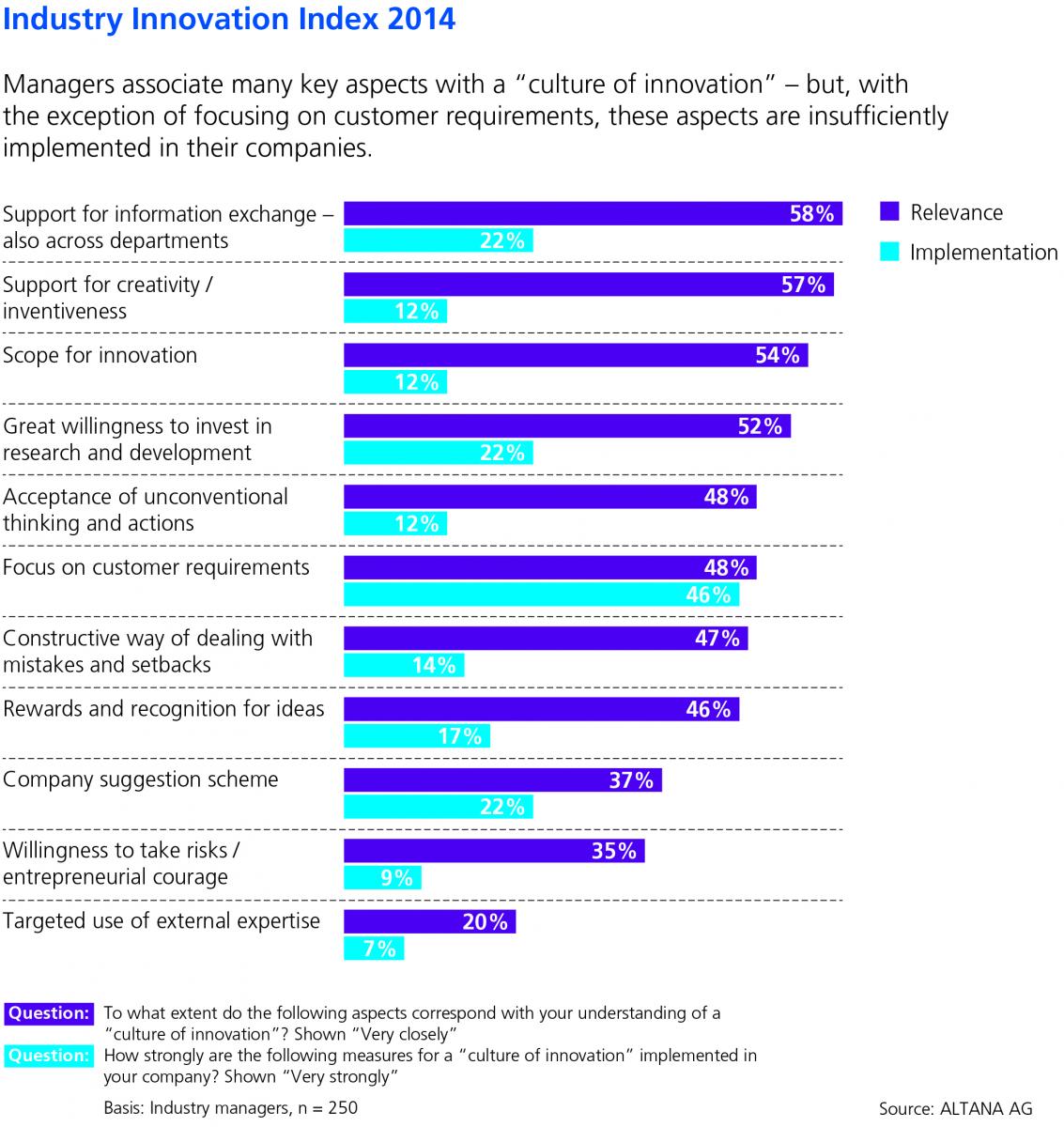