Antwerp, Belgium - Speaking at a Media Round Table conference held at Bayer's Antwerp site, Patrick Thomas, chairman of the board of management at Bayer MaterialScience, discussed the importance of sustainability and social responsibility - within the context of economic viability. "People, planet and profit - it has to be all three," he said.

Antwerp, Belgium - Speaking at a Media Round Table conference held at Bayer's Antwerp site, Patrick Thomas, chairman of the board of management at Bayer MaterialScience, discussed the importance of sustainability and social responsibility - within the context of economic viability. "People, planet and profit - it has to be all three," he said.

That is the case for the company's investment in carbon dioxide-based polyurethane, Thomas said. Replacing a non-renewable oil derivative with CO2 means that "CO2 is 30% of the polyol component in polyurethane, which is two-thirds of the total material. So that's a substantial replacement," he said. "By far, most goes into mattresses, which is a huge market. We're working closely with Ikea in this area. Ikea's a company that thoroughly scrutinizes its supply chain and is actively working to reduce its carbon footprint. Developments like these that can help." 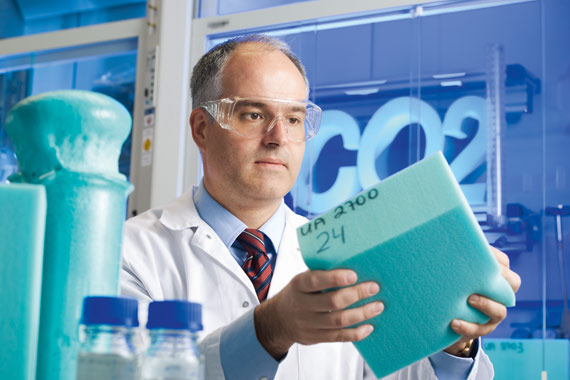 The carbon dioxide for the project currently comes from a lignite-fired power plant operated by energy company RWE, another partner in the project. Industrial production of the new CO2-based polyols will start in 2015.

Interestingly, according to Tony van Osselaer, member of the board of management of Bayer MaterialScience, and head of industrial operations, it's "not the CO2 cost that is driving the economics, it's the reduced oil consumption."

He also stressed that Bayer was examining processes that could help solve the problem of storing sizable amounts of intermittent power - the excess energy that is generated by renewable, intermittent sources - by using this energy to convert CO2 into feedstock via chemical processes. "In other words, storing this energy as a material," he said.  "Establishing such closed-loop systems requires a high degree of systems integration, but especially here in Europe, where industries are located close together, this is the future."

When asked whether Bayer was also looking at replacing the isocyanate component in polyurethane foam by a renewable feedstock, Thomas commented that, in general, replacing aromatics is not yet economically viable. Bayer has, however, developed a gas-phase phosgenation process for the production of TDI, the other component in polyurethane. The technology results in significant savings on solvents - up to 80% - and cost savings due to a reduction in energy consumption required to process the much smaller volume of solvent during distillative recovery.

Compared to a conventional TDI plant of the same size, the process developed by Bayer MaterialScience reduces energy consumption by up to 60%. These energy savings result in a reduction of the equivalent of 50,000 metric tons of CO2 emission per year. The new technology is currently being implemented in existing TDI production sites Dormagen and Brunsbüttel, which are scheduled to go on line in 2014, and will then be rolled out across all of the company's TDI production sites.

Van Osselaer noted that Bayer is striving to realize a total reduction in CO2 emissions in the period 2005-2020 of 40%, and energy savings of 30%, mainly through projects with a payback period of two to three years.

But as Patrick Thomas commented: "Our biggest problem is choosing innovations - putting our money on the right horse." He pointed to Bayer MaterialScience's carbon nanotube project, which was brought to a close earlier this year due to the fact that "groundbreaking applications for the mass market relating to our own portfolio and therefore comprehensive commercialization" were not likely in "the foreseeable future". In other words, people, planet and profit were not adequately aligned, and hence: "Sometimes you just have to call it a day and wait for the market to catch up."