Green Matter: Bioplastics in the war on superbugs

Microbes are highly creative, hardy little adapters when it comes to survival. Mutation, natural selection and genetic variation are all means which they cleverly employ to evolve and adapt to changing environmental conditions.

Microbes are highly creative, hardy little adapters when it comes to survival. Mutation, natural selection and genetic variation are all means which they cleverly employ to evolve and adapt to changing environmental conditions.

In recent years, microbiologists have identified a growing number of new, antibiotic-resistant "superbugs" that are causing worry and concern at hospitals and among health workers - not to mention the public at large. Just last month, for example, a group of Indian doctors reported on 12 cases of what they called 'totally drug resistant' or TDR- TB. The Indian Health Ministry responded competently and swiftly in full denial mode: "The doctors from Hinduja have unnecessarily raised a panic alarm. The term TDR is not recognized by the WHO or the Revised National Tuberculosis Control Programme (RNTCP). As of now, they are only slotted as Extensively Drug Resistant (XDR)-TB cases."

Oh well, that's all right then. No worries. 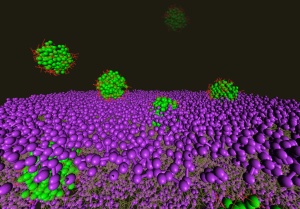 Superbugs are emerging faster than new drugs are being developed to combat them. Moreover, antimicrobials research and development is not a priority at major pharmaceutical companies and the supply pipeline of new treatment strategies is gradually running dry. This led the Infectious Diseases Society of America in 2010 to launch the 10 x '20 initiative to spur the development of 10 new systemic antibiotics by 2020, as well as a sustainable antibiotic research and development enterprise for the long-term. Forty-five public health organizations have endorsed the initiative, and the hunt for new antimicrobials was opened.

Amazingly, biopolymers - albeit very, very small ones - may offer a solution.

Researchers collaborating at the A*STAR Institute of Bioengineering and Nanotechnology in Singapore and the IBM Almaden Research Center in California have developed biodegradable polymer nanoparticles that can punch holes through the cell membranes of microbes, thus physically destroying them.

As Yiyan Yang, of A-Star, said: "The physical destruction of the bacterial cell membrane, a fundamentally different approach to the targeted chemical attack of conventional antibiotics, should prevent bacteria from ever developing resistance to the treatment."

The researchers were inspired by the antimicrobial peptides found in nature: molecules that form important defensive weapons throughout the animal and plant kingdoms against a broad spectrum of bacterial and fungal pathogens. Antimicrobial peptides interact with microbe cell membranes by disturbing the membrane integrity. Their antimicrobial activity would appear to be governed primarily by charge and hydrophobicity. To date, the clinical success of such peptides in treating bacterial infections has been limited, largely because the body quickly breaks them down and they are expensive to manufacture.

The researchers in Singapore and California developed a polymer-based peptide alternative, which incorporated three key components: a non-polar hydrophobic head and tail, which drives the polymer to self-assemble into a nanoparticle; a positively charged block that selectively interacts with the bacterial cell membrane; and a carbonate backbone that slowly breaks down inside the cell, ensuring good biocompatibility. Hence unlike most existing antimicrobial materials, these are biodegradable, which means they are eliminated naturally from the body in due course (rather than remaining behind and accumulating in organs).

"The starting materials of our synthesis are inexpensive, and the synthesis of the antimicrobial nanoparticles is simple and can be scaled up easily for future clinical application," says Yang.

Tests confirm that the nanoparticles can efficiently kill fungi and multidrug-resistant bacteria such as MRSA, even at low concentrations.

The nanoparticles may not be limited just to drug applications. "We will also evaluate their application in the sterilization of surfaces, as well as in consumer products."â€¨

When the going gets tough, the tough get going. But who would have expected bioplastics to be so tough?