Now that NPE has been and gone, and the exhibition dust has begun to settle, it's time to take a look at what else has been happening around the world, especially in the green green world of bioplastics.

Now that NPE has been and gone, and the exhibition dust has begun to settle, it's time to take a look at what else has been happening around the world, especially in the green green world of bioplastics. 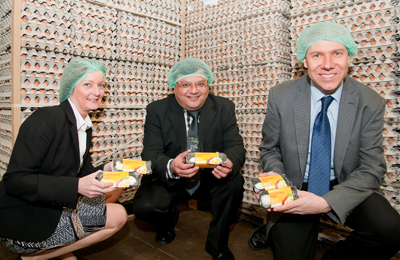 Australian-based Cardia Bioplastics announced that it has been awarded an annual supply contract for hygiene films made using Cardia's Biohybrid technology worth at least $500,000 p.a. The deal was signed with a leading American diaper products company whose product offers an environmentally sensitive diaper that uses less petroleum-based and more sustainable materials. The diapers themselves are also packaged in an outer packaging made using Cardia Biohybrid technology.

In the U.S., Sweetwater Energy, a Rochester, NY-based producer of low-cost sugars from non-food plant materials, and BioGasol ApS, a Danish biotechnology company, have announced a strategic partnership in which Sweetwater will use BioGasol's pretreatment technology, Carbofrac, as part of its overall solution to maximize the amount of sugar that can be extracted from plant-based feedstocks for the production of biofuels, biochemicals, and bioplastics.

Shelling out for sustainable materials

From the U.K. came the news that scientists and food industry experts are investigating how to turn egg shells into plastics that could be used to manufacture anything from food packaging to construction materials. The Food and Drink iNet (innovation network), which was established in 2008 to coordinate specialist support to stimulate innovation in the food and drink industry, announced that it is funding a research project at the University of Leicester, which is aimed at finding useful ways of recycling egg shells. Egg shells are currently regarded as waste by food producers and as a financial drain on their business, as they have to pay for their disposal in landfill.

The researchers are looking at ways to use the egg shells as a filler material to 'bulk up' different grades of plastic, for applications ranging from ready meal food trays to shop fittings. The ultimate goal is to use the egg shells in packaging to protect egg products - giving a second lease of life to the egg shell in the very role it was created for....A true case of recycling.

"Egg shell is classified as a waste material by the food industry but is in fact a highly sophisticated composite," said Food and Drink iNet director Richard Worrall. "The scientists at the University of Leicester have identified a number of uses for egg shell waste and the Food and Drink iNet is very pleased to support a 'Collaborate to Innovate' research project to examine egg shell recycling solutions.

Among other things, the iNet-funded project aims to develop a post-treatment process to convert the eggshell into a starch-based plastic; test the mechanical properties, including the strength of the new material and make a variety of materials to optimize the eggshell loading and particle size.

Five years ago in Thailand, the government approved a Roadmap for the Development of the Bioplastics Industry, with the goal to become the leader in the bioplastics industry in the region by the year 2021. The first phase is feasibility, during which imports of bioplastic material qualify for favorable tariff rates. The second is the development of a local bioplastic industry using imports. And then eventually, bioplastics imports should be replaced with locally produced materials from Thailand 's abundant crops of cassava and sugar, which two products are the main raw materials for bioplastics. Already, Thailand has a large lactic acid (LA) manufacturing base. Made from cassava and sugarcane, LA can be processed to become an ingredient in bioplastics production.

What seemed a highly ambitious plan is now starting to take shape.  The country has been the scene of  a flurry of strategic joint ventures and investments in the bioplastics industry - think BioAmber partnering with PTTMCC Biochem for PBS production in Thailand, think Purac - and is well on the way to becoming a regional hub for bioplastics manufacturing and export. "Even though the cost of bioplastics is twice as high as its fossil-fuel-based counterpart, growing concerns about ecology and pollution will drive this sector's growth," said Pipat Weerathaworn, president of the Thai Bioplastics Industry Association (TBIA).

He said the Industry Ministry's Thai Industrial Standards Institute is working on rules and regulations on bioplastics standards and is committed to establishing a biodegradability testing lab and certifying system in Thailand on a par with DIN Certco, the German bioplastics certification body.
Although Thailand still only ranks third-China and Japan are Asia's number one and two-the country is working hard to pull ahead. Putting its money where its mouth is,

plans were also announced for the development of an upstream pilot bioplastics plant requiring an investment of 300 million baht ($9.7 million), as a partnership between the National Innovation Agency, the Federation of Thai Industries (FTI) and the TBIA. If all goes according to plan, the pilot plant will be built and operational by 2015, with an annual production of 1000 to 10,000 tons.

Come to think of it, Asia may offer just the right combination of low production costs and abundance of (inedible) vegetable matter needed for producing biopolymers. Looking at the number of joint ventures and partnerships established there over the past year alone, this would seem to be a thought that has occurred to others as well. It's a development that we'll be keeping an eye on in this blog.