Green Matter: A dash of isosorbide makes all the difference

In the quest to replace fossil-based feedstocks for cost-effective equivalents derived from renewable resources, isosorbide has emerged as a promising player. A sustainable and non-toxic diol for polymers, isosorbide is a biobased chemical made from starch that can be used in a wide range of applications, including BPA-free polycarbonate and biobased copolyesters.

In the quest to replace fossil-based feedstocks for cost-effective equivalents derived from renewable resources, isosorbide has emerged as a promising player. A sustainable and non-toxic diol for polymers, isosorbide is a biobased chemical made from starch that can be used in a wide range of applications, including BPA-free polycarbonate and biobased copolyesters.

Although isosorbide, as a derivative of sorbitol, is not a new product, it is one that for a long time was considered too complicated to purify for chemical industrial use. A company that has directed major R&D efforts to develop technology for using isosorbide in the polymer industry is Roquette Frères (France), a global leader in the starch manufacturing industry. Backed by funding from the French government, the company has spent 5 years investigating, among other things, the use of isosorbide as a renewable diol for various polymers and biopolymers, and, in the form of isosorbide diester, as a green plasticizer.

"Isosorbide brings added value and sustainability to co-polyesters and to polycarbonate. And it's a drop-in solution for DINP; it's a 100% phthalate-free plasticizer and REACH-approved for industrial volumes," said Cristophe Rupp-Dahlem, Programs Director at Roquette, at the recent European Bioplastics Conference in Berlin. He continued: "Today, isosorbide is a platform for Roquette building blocks."

BPA-free polycarbonate
Calling isosorbide polycarbonate "a sustainably engineered plastic" with "excellent optical properties, multi-axial, high temperature, chemical and UV resistance" in which bisphenol A is replaced by isosorbide, Rupp-Dahlem described how Roquette had collaborated with Mitsubishi Chemical on the development of Durabio, a durable biobased isosorbide 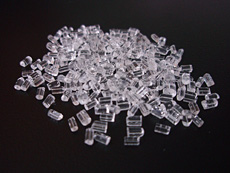 polycarbonate that combines the benefits of PC and PMMA. Mitsubishi Chemical upgraded its existing polycarbonate facilities at its Kurosaki Plant and started producing Durabio there in August. An annual production of 20,000 tonnes is projected for 2015.

Clearer, more heat-resistant PET
The developments around another polymer, polyethylene isosorbide terephthalate, are also extremely promising. PEIT has excellent clarity and a higher heat resistance than both PET and PETG, which considerably enhances its application functionality. "Isosorbide-based copolyesters are a new family of polyesters," said  Rupp-Dahlem. "And they are already commercially available. For example, earlier this year, SK Chemicals launched ECOZEN, a new range of copolyester resin."

As this was news to me, it was time to find out more.

SK Chemicals is a Korean green chemistry and life science company that had already been producing polyethylene terephtalate glycol-modified, or PETG, under the brand name SKYGREEN. Chemical distributing company IMCD, the distributor of ECOZEN in the Benelux kindly forwarded my questions to Geoff Thomas, a technical advisor at SK Chemicals.

ECOZEN ("reaches the zenith of eco-friendliness") contains 4 monomers - Ethylene Glycol (EG), Pure Terephthalic Acid (PTA), Cyclohexane Dimethanol (CHDM) and the new corn-based bio-monomer, the content of which can be varied depending on the properties required. According to Thomas, the total bio-content of the material can be further expanded if required by using a bio-source for some of the other monomers. He explained that the main reason to add the bio-monomer -  which he avoided naming - is to increase the temperature resistance of PETG, but it also increases most of the other properties such as impact strength, etc.

"PETG has been limited in its end-use applications by its relatively low temperature-resistance of about 60C. With the current grades of ECOZEN, this temperature resistance can be increased to over 100C, which opens many new applications such as those that require sterilization by boiling water. In addition, because of worldwide concerns about the use of materials containing Bisphenol A in food-contact applications, ECOZEN provides an ideal drop-in solution because it contains no BPA. ECOZEN grades are currently in development which will offer even higher temperature resistance for use in applications, such as medical devices, that require steam-sterilization," said Thomas.

He added: " ECOZEN products have been commercially available worldwide since March 2012."

High time to blog about them, then, and with a little luck, I'll be kept up to date on their newest developments from now on. Something to look forward to!