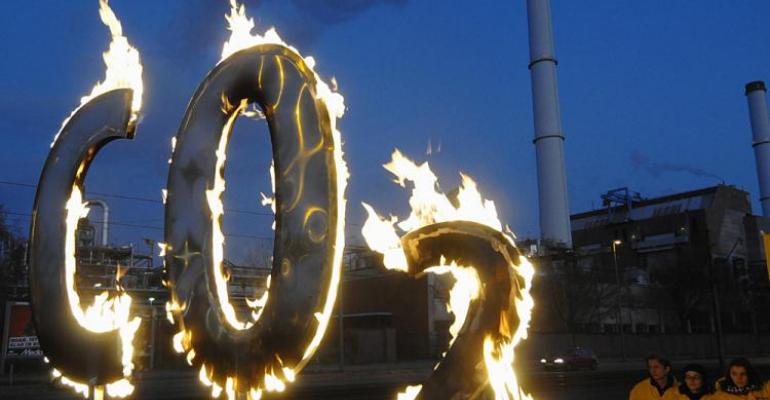 As a greenhouse gas, CO2 gets an unenviable amount of bad press. At the second conference on CO2 in Essen, Germany this week, however, CO2 received the full VIP treatment. Far from viewing it as a polluting nuisance, the folks at this conference saw CO2 as a valuable feedstock-a virtually unlimited resource offering opportunities for new ways to produce chemicals and polymers, as well as enabling the introduction of large-scale sustainable energy.

"Innovation is about change", said Gernot Klotz, of Cefic, talking about his vision of the CO2 economy from the point of view of the chemical industry. "Not about depending on the existing structure."

And change is precisely what the CO2 economy proposes. All commodity chemicals today are manufactured from building blocks based on oil and natural gas. "Today, the entire economy is based on finite resources, which, at some point, will run out," said Michael North, of the University of York. "We'll have no choice at that point."  But CO2 offers us a choice. As Klotz pointed out: "It's always there, and there's a lot of it. So we should use it!"

A paradigm shift from an economy based on fossil fuels to one based on renewable resources and technologies looks to be imminent in the future. Change, however, also operates as a business enabler, with new opportunities being created and the growth of new value chains.

The conference covered the entire spectrum of the CO2 economy, with presentations on innovative ways to capture, sequester, utilize and store CO2.

A young Swiss company called Climeworks, for example, has developed what it calls "direct air capture solutions" to capture CO2 from ambient air. The company has built a demonstrator that produces 1 ton of extremely pure - 99.3% - CO2 per year from air, and plans to be commercially up and running on industrial scale by 2019. "We want to supply atmospheric CO2 for the carbonation of drinks and food packaging. Coca-Cola has already expressed great interest in our CO2," said Climeworks' Christoph Gebald,

Michael Priestnall, of a company called Cambridge Carbon Capture talked about the opportunities presented by the mineralization CO2, i.e. the conversion of CO2 into inorganic minerals that may be used in building materials. "It's an area of increasing interest," he said. "Driven by economic feasibility."

CO2 technology as a feedstock for polymers is another exciting technology that is now starting to show results. Among the highlights:

A host of companies, including Bayer, SK Chemicals, Dow, Sabic, Novomer, Mitsui Chemicals and Mitsubishi are investigating the (economic) potential of the catalytic synthesis of organic carbonates from CO2 and epoxides, from which polycarbonate can be produced. Benjamin Schäffner, of Evonik, talked about the biocarbonate project at his company, derived from epoxidized vegetable oil that underwent carbonation to form biocarbonate, which could be used, among other things, as a phthalate-free biorenewable plasticizer with properties comparable to the phthalate DINP.

A speaker from New-Zealand-based LanzaTech, a producer of low-carbon fuels and chemicals from waste gases, talked about its gas fermentation technology, that uses proprietary microbes to take the carbon from CO-rich gases to convert into fuels and chemicals that can be used to make plastics. The technology reduces overall emissions, as it substitutes carbon from fossil fuels. LanzaTech is operating at pre-commercial-scale in Shanghai, China at a facility developed with Baosteel, one of the largest steel producers in the world, and plan to move into commercial operation in the very near future.

And Christoph Gürtler, project manager of Bayer MaterialScience's Dream production project explained how they have successfully been producing polyols-an ingredient of polyurethane-based on carbon dioxide at pilot scale since 2011. "For us it's about sustainability and industrial value creation," he said. "How to turn something that is there in abundance into value and products."

He emphasized that the project was a collaborative effort between academia and the industry, and that government funding had helped make it possible. Now, however, a product is available that yields a material with the same or better properties than conventional polyurethane. "It's actually a story about polyurethane innovation," said Gürtler.  "But it works. We're planning to build a plant for commercial production on an industrial scale, with a capacity of several thousand metric tons per year in the year 2015 +."