Researchers at Wageningen University and IMARES in the Netherlands recently published the first of four studies investigating the effects of plastic in the North Sea. It makes for an unsettling read.

Researchers at Wageningen University and IMARES in the Netherlands recently published the first of four studies investigating the effects of plastic in the North Sea. It makes for an unsettling read.

Reports about floating fields of plastic trash in oceans and seas have been circulating since the 1970s. And since the confirmation of these reports, with the discovery of the giant Pacific garbage patch in 1997, followed by findings of similar patches in the Indian and North Atlantic Oceans, even the most ecologically uninformed have become aware that massive amounts of plastic debris are floating around in Earth's seas and oceans. This 'plastic soup' causes devastating problems for marine life. Who hasn't seen the pictures of dying sea turtles entangled in plastic bags they have mistaken for jellyfish?

And that's just the plastic we can see. 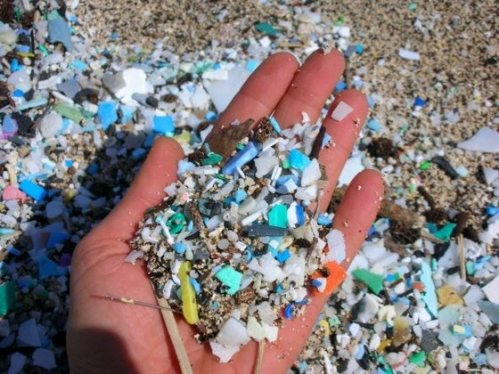 More recently, scientists have found that tiny plastic micro and nano particles have also been accumulating in the oceans for at least the past 40 years. These are particles measuring around thirty millionths of a millimeter, invisible to the naked eye. These particles are not only the result of the degeneration of the larger-sized plastic flotsam-macro litter-but they also end up in the sea directly via runoff. Tiny-sized particles used in cosmetics, synthetic fibers shed from clothing during laundering and the like end up in city sewage systems and ultimately in the seas.

The European Union and the Dutch government have acknowledged the problem and the need to monitor the presence and concentration of these particles, and to investigate their effect on marine life.

The Dutch research team, led by Professor Bart Koelmans, exposed mussels to various concentrations of nanoplastic, to determine at which concentration an effect could be measured. The researchers first colored the plastic nano particles after which, using dynamic light scattering, it was possible to determine the particle concentration at which an effect occurred. The team also varied the quantity of algae, which is the normal food source for mussels.

The researchers found that mussels exposed to plastic nano- and micro particles eat less, and thus grow less well. They also noted that the extent to which the tiny plastic particles clump together is also extremely important for understanding particle uptake and the resulting effects in marine organisms.

"It means that those effects are not easy to predict because the biological availability of the particles can differ enormously from one organism to another, and because variation in water quality also plays a role", says Professor Koelmans.

The three other studies of the group are due out in the near future, with the first of these examining the effect of plastic on lugworms. These organisms not only lose weight on a diet of plastic particles, they were also shown to take in more toxic substances, known as persistent organic pollutants, such as polychlorinated biphenyls (PCBs), which bind to plastics. Because these 'POPs' are so hydrophobic, they concentrate in the plastic micro- and nanoparticles, which are subsequently eaten by marine life, large and small.

Far too little is known about the potential damage this does to the marine ecosystem, but it is an area in which additional research is necessary, in order to determine what substances do what. In order to analyze the interaction of plastic and other toxic substances in the food web, Koelmans' group has developed a detailed computer model for estimating the risks plastics pose in the sea.

The fourth publication will report on the group's research into plastic debris in the stomachs of fish. An analysis of hundreds of fish has shown that 12% have debris in their stomachs. Around half of that debris is plastic.

It's sobering to think of the harm we are doing to the marine environment. Worse, it's really, really stupid: by poisoning the marine food web, it's more than likely that we'll end up poisoning ourselves in the process.