Back in 2003, Thailand saw an opportunity, and decided to take it. The country already had an established plastics industry, plus cheap and abundant sources of feedstock from its agricultural industry, and it decided to take a gamble on bioplastics. Today, Thailand is on the fast track to become the bioplastics hub of the ASEAN region - within another three years, if it's up to Science and Technology Minister Worawat Uea-apinyakul. How did they do it?

Back in 2003, Thailand saw an opportunity, and decided to take it. The country already had an established plastics industry, plus cheap and abundant sources of feedstock from its agricultural industry, and it decided to take a gamble on bioplastics. Today, Thailand is on the fast track to become the bioplastics hub of the ASEAN region - within another three years, if it's up to Science and Technology Minister Worawat Uea-apinyakul. How did they do it?

Feasibility study
A feasibility study conducted by the Thai government in 2004 showed that Thailand boasted a number of important advantages, including existing capabilities and infrastructure. Thailand had, and has the region's largest plastics processing industry and can therefore take advantage of a wide availability of knowledge and experience in the industry. It was therefore decided to go ahead with the development of a bioplastics industry. In 2006, the government commissioned the Thai National Innovation Agency to draft a roadmap for the development of the Thai bioplastics industry. This roadmap was officially approved by a Cabinet resolution in 2008. 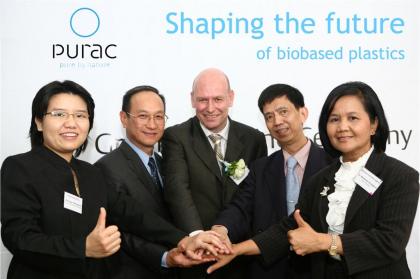 Thailand walked the walk
Four strategies were set out in the five-year Bioplastics Roadmap. Specified for each strategy were: target identification, indicators, action plans, responsible agency, functions of each agency and a budget for implementation. These four strategies were also forward-looking and long-term, designed to promote comprehensive development of the new industrial sector, rather than simply a fast return on investment.

The first strategy, for example, was to ensure a sufficient supply of biomass feedstock. It was specifically stated that this was not to interfere with the food supply, and that technology was to be developed "to ensure that the bioplastics production can reach the break-even point and to prevent various problems on the crop cultivation including the destruction of an ecosystem balance." Other strategies included investments to accelerate technology development and technology cooperation, and the need to establish supportive infrastructure. At the policy level, a range of measures were envisaged to support production and encourage the use of bioplastics, including procurement policies, taxation, and public relations, and pilot schemes and compliance with international standards.  Tax breaks were announced in the form of corporate income tax exemptions for companies active in eco-friendly chemicals manufacturing and eco-friendly products manufacturing.

In short, Thailand went all out to create a business, intellectual, industrial and social setting in which the bioplastics industry could develop and grow.

Phase 2
Currently, phase 2 of Thailand's Bioplastics Roadmap (2011-2015) is underway. Again, the government has committed substantial funds towards boosting investment in the Thai bioplastics industry, including providing a grant worth THB 300 M (about $10 million) for the construction of a bioplastic resin pilot plant with a production capacity of 1000- 10,000 tons per year, based on a public- private (30:70) co-investment. Note: the call for proposals for building the plant remains open until March 31, 2013.

In addition, the government is considering supportive measures such as providing low-interest soft loans (2% interest for 8 years) for investors in the bioplastics and biochemical industries as well as other fiscal measures, which remain to be determined. Proposals are also under consideration for government green procurement targets, to help stimulate the local market for bioplastics.

Reaping the benefits?
Having pumped 60 million dollars into establishing its bioplastics credentials, Thailand is looking forward to reaping the benefits. Already, the country has attracted investments from companies such as Purac, (lactide) PTTGC/NatureWorks, (PLA) BioAmber/Mitsui (succinic acid) and BioAmber/PTTMCC Biochem (PBS).

And Thailand continues to attract interest from abroad. At the recent Inno Bioplast 2013 conference in Bangkok, various companies, among others from Taiwan and Norway, announced plans to set up operations in Thailand. Polylactic acid resin maker NatureWorks, in which Thailand's PTTCG holds a 50% stake has also said it was considering Thailand as the location for setting up its second resin plant unit.

However, to become a true hub, more is needed.  One challenge facing the industry, for example, is how to create a local market in Southeast Asia for the new plastics. While the area is projected to become the world's major bioplastics manufacturing region within the next 10 years, consumption, except for Taiwan, is lagging. Another concern is that climate change will affect crops, causing feedstock shortages or driving prices up. And, surprisingly, fears have recently been expressed that the cheap shale gas produced in the U.S. and subsequently lower energy costs will make it hard for Asian - including Thai - manufacturers to compete.

All that remains to be seen. In the meantime, Thailand is continuing to implement its Roadmap, building plants, establishing knowledge centers, developing new technology and creating jobs. The benefits are expected to impact on every level: social, economic, technological and environmental.

It looks as if Thailand's gamble is paying off. No wonder they're ambitious.