Green Matter: Is whey the way to go?

Bio-based materials come from numerous different sources. Examples abound of materials derived from starch, sugar, castor oil, lignin - you name it. What I hadn't yet run across, at least not up until now, was whey.

Bio-based materials come from numerous different sources. Examples abound of materials derived from starch, sugar, castor oil, lignin - you name it. What I hadn't yet run across, at least not up until now, was whey.

Whey is a by-product of cheese making that is formed when the cheese curds separate from the milk or cream and that is available in large quantities. The idea arose that it could be put to good use by turning it into a sustainable barrier film coating.

That, in short, is the story behind the Wheylayer Consortium, a group of 14 partners from seven different EU countries, which was formed in 2008 to carry out the EU Wheylayer project. The project, which ended in 2011, is now being successfully continued under the name Wheylayer 2 with eight of the original partners, plus two new ones from in total 5 countries.  Wheylayer 2 commenced on August 1, 2012 and is focused on up-scaling the results obtained in the first Wheylayer project with industrialization and commercialization of the new material the goal. 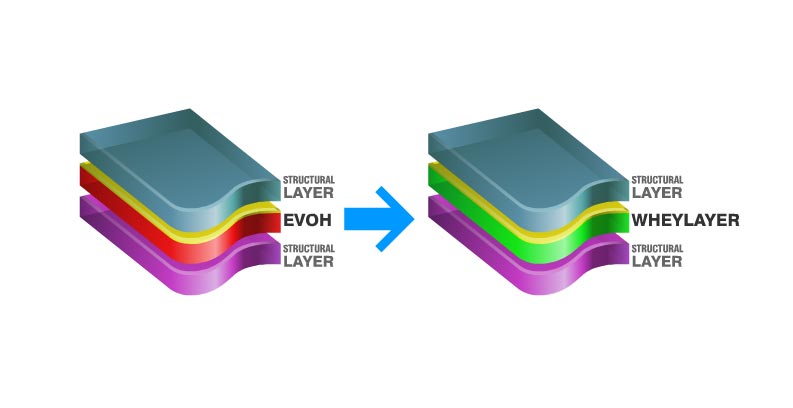 Better barrier from whey
A big problem in the food industry is the oxidation of fats, oils, and other food components, which is responsible for producing off-flavors, discoloring and nutrient loss. Protection against oxygen is therefore an important requirement of food packaging. And while polyolefin films such as PE and PP provide excellent moisture barriers, they do not provide an adequate oxygen barrier.

For this reason, multilayer structures have long been used in which polyolefin films are coated or laminated with such materials as permeation resistant EVOH or PVDC polymers. The result is a relatively expensive packaging film with excellent barrier properties that is almost impossible to recycle efficiently, due to the difficulties in separating the different layers.

The Wheylayer project targets precisely this aspect. As a barrier layer, it is "orders of magnitude better than other available bioplastics in terms of oxygen barrier", said Elodie Bugnicourt, head of Ecomaterials at the Barcelona-based research company and consortium member, IRIS, and technical manager of the team working in Wheylayer. "The coating provides good barrier properties and a very acceptable thermomechanical behavior for packaging. It now approaches the performance of EVOH in many applications," Bugnicourt said.

The whey coating is made by separating the whey proteins from the liquid whey, drying them, and then mixing in biodegradable additives to obtain the desired mechanical integrity. Next, the coating is applied to a carrier film, using a patented process. Unlike EVOH multilayer film, which is coextruded, Wheylayer uses a lacquering and drying process. "This needs to be done with care, meticulously following the patented process, as otherwise the barrier bioproperties can vary", Bugnicourt explained. "Not all whey proteins are the same. We have worked - and are still working - to optimize the formulations. " She added: "The next step is to laminate it with the other plastic - PET, PP, PE or whatever the market requires. The lamination process occurs in exactly the same way as always."

Asked about the other properties of the material, she continued: "Wheylayer is intended specifically for use as an interim layer. It is not meant to come into direct contact with, for example, food products, as it is sensitive to direct contact with moisture. However, the migration levels of derived multilayer laminates have been tested and are well below all prevailing norms."

A recyclable answer
Overall, the main aim of the Wheylayer project was to increase the recyclability of multilayer packaging. By developing a barrier coating that could be easily separated from the other flexible packaging layers, thus making it possible to completely recycle these without contamination by the barrier material, it would also be possible to meet the growing market demand for economical and environmentally friendly packaging materials. 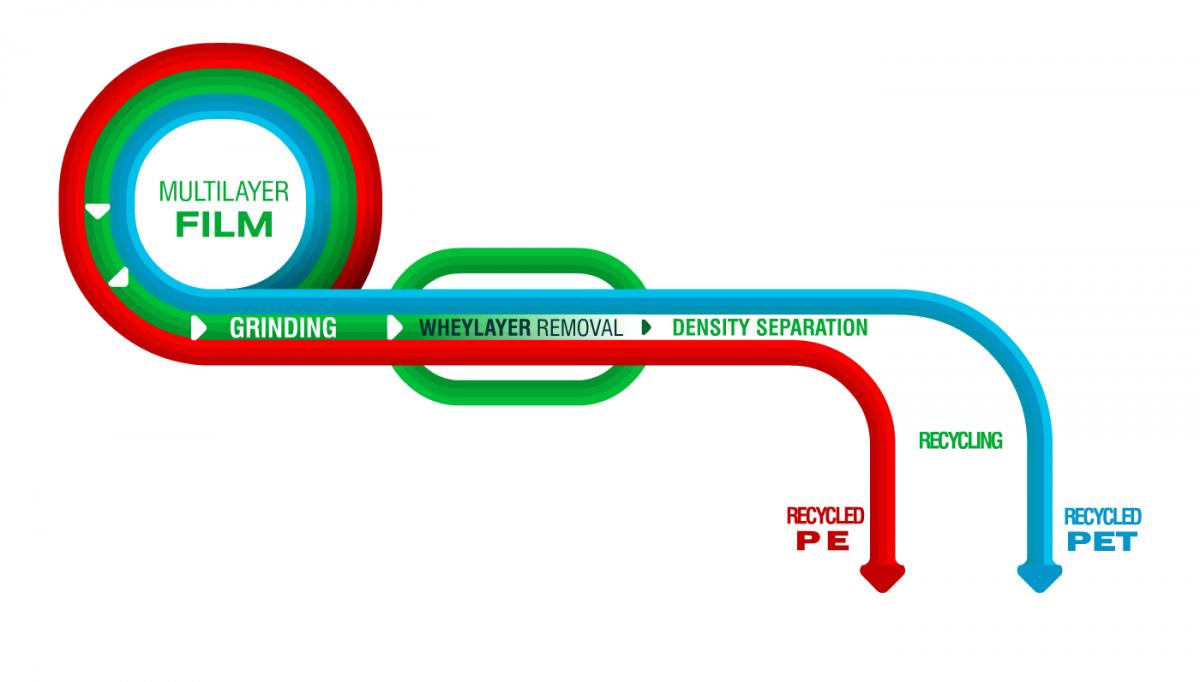 Bugnicourt: "The whey coating is easily removed by means of enzymatic washing. Washing is already a part of regular recycling operations  - recyclers use a wash solution containing detergents to remove grease and dirt from the waste plastic. Our Wheylayer easily dissolves and washes off the substrate with the help of an enzyme solution such as Alcalase."

The reel-to-reel Wheylayer manufacturing process was developed at lab and pilot scale at consortium partner Fraunhofer Institute, in Germany. A semi-industrial scale Wheylayer prototype machine was subsequently built at the IRIS facility in Spain, which was able to run at 10 times the speed of the pilot with lower energy consumption.

In the Wheylayer 2 project, IRIS is tasked with proving the industrialization potential of the process, which includes building a machine that can run at industrial speeds - about 3 to 5 times faster than the prototype - in cooperation with industrial partners in Spain and Slovenia. "These partners are medium-sized plastics processors. Among them is Lajovic Tuba, who is coordinating the Wheylayer 2 project," Bugnicourt said. "They believe in the project and have always been a motor to its success, investing time and funds in developing applications for the material."

According to Bugnicourt, commercialization of the Wheylayer process is expected towards the end of the Wheylayer 2 project in July 2014. The initial focus will be on the production of films, tubes, blisters and trays.