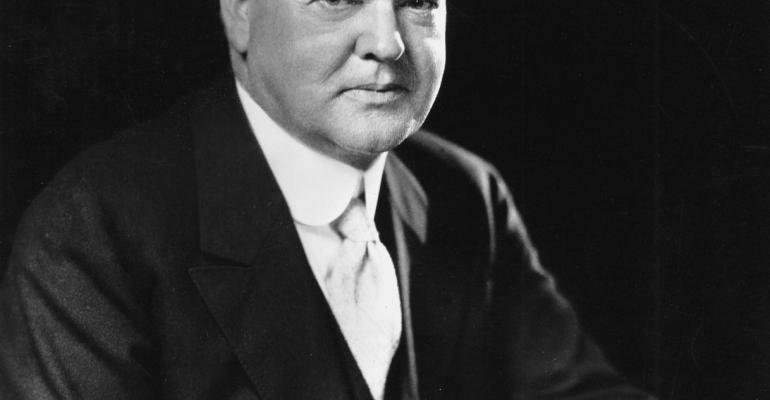 Just before the great depression in 1929 then president, Herbert Hoover, said that "With America's high standard of living, we cannot successfully compete against foreign producers because of low foreign wages and a low cost of production." In spite of these dire predictions America survived the depression and went on to compete and simultaneously out-manufacture Germany, Italy, and Japan to win World War II. That same over-paid labor force generated enough profit to not only finance the rebuilding of Europe and Japan, but to also protect them during the Cold War.

Just before the great depression in 1929 then president, Herbert Hoover, said that "With America's high standard of living, we cannot successfully compete against foreign producers because of low foreign wages and a low cost of production." In spite of these dire predictions America survived the depression and went on to compete and simultaneously out-manufacture Germany, Italy, and Japan to win World War II. That same over-paid labor force generated enough profit to not only finance the rebuilding of Europe and Japan, but to also protect them during the Cold War. These achievements were topped-off by creating an economy that became the envy of the world.

It has taken globalization and rampant greed to create the impression that Hoover's prediction was valid. It is estimated that at its peak in 2003 the plastics industry employed 1.4 million people in approximately 25,000 companies. Starting in the 1990s there was a major increase in the number of U.S. Original Equipment Manufacturers who moved the product of their molds, plastic components, and products to low-labor rate countries around the world. Some injection molders followed their OEM customers offshore. Others went out of business, were absorbed by larger companies, or transformed themselves into the flexible, lean and mean suppliers their customer claimed to want. By 2010 direct plastics industry employment was reduced to around 876,000 in just over 16,600 facilities.(1)

The overall manufacturing industry has suffered a similar decline. In the past decade 42,000 factories closed in this country. Approximately one-third of all U.S. manufacturing jobs disappeared between 2003 and 2008 while American companies more than doubled their employment rolls in China.(2)  These declines hurt the manufacturing industry in general and the plastics industry specifically. However, the worst damage was done to the country.

The plastics industry watched in horror as their OEM customers rushed to embrace globalization and the resulting off-shoring. The long-term wellbeing of the country and the domestic economy were trampled in the stampede to maximize short-term profits. It was painful to watch as state-of-the-art injection molding and moldmaking companies were reluctantly down-sized or put out of business.

The marketplace changed, but the plastics industry was slow to recognize and respond to the new global economy. For too long a period of time, much of the industry had been living the good life and resting on its laurels. The warning signs were there but most were reluctant to upgrade equipment and personnel, or to automate. There was general resistance to adopting the then new molding technologies of gas or water assisted injection molding, liquid silicone molding, MuCell foam, in-mold labeling, injection molded metal, multi-material molding, in-mold assembly, etc. The injection molding industry's failure to recognize and respond to the marketplace changes was another example of mismanagement.

Survival of the fittest

There was a general attitude of "wait and see." Large, well-established companies with sterling reputations began to disappear. It was disheartening to receive an auction notice for a well-known molder that was in business when I joined the industry. In many instances these sales bills contained few if any state-of-the-art injection molding machines. What was actually happening was a devastating example of the age-old phenomena of the survival of the fittest. The fittest in this case being not the largest, strongest, or richest; but rather those that could quickly adapt to a cut-throat buyer's market in a global economy. Out of that carnage emerged a shiny, new, stronger but flexible, state-of-the-art group of world-class injection molders capable of competing and winning in a global economy. Their rally call was the new management philosophy of lean and mean manufacturing. The lean part taught molders how to streamline their operation and eliminate activities that did not contribute to the bottom line. The mean part eliminated the frills and personal relationships that fostered good buyer-seller cooperation. Lean manufacturing principles resulted in almost unbelievable improvements in efficiency and timing. The mean manufacturing principles resulted in taking nearly all of the fun out of doing business.

While all of this was happening, OEM buyers were going through the trial-and-error process of learning how to deal with suppliers in low-labor-rate countries. They were, however, handicapped by the widespread practice of purchasing their molded parts and molds from the lowest bidder. Up to a point that practice worked in the U.S. where the buyers and suppliers understood the practice and operated accordingly. This same practice was disastrous in a low-labor-rate country such as Korea or China.

Don't misunderstand, it is possible to purchase good quality molds and molded parts in Asia if you know how. The problems often begin when a buyer, accustomed to purchasing from the lowest bidder in the U.S., goes to China to reduce costs. Once there, that buyer will again search for the lowest bidder. This mistake accounts for many of the delivery, quality, rising costs, and material substitution problems we hear and read about. In 2011 the Consumer Product Safety Commission established an office in Beijing, China. The federal government is short of money. They wouldn't have set up that office without a good reason.

In spite of these real problems, there are a large number of U.S. OEMs who are continuing to send their molding work offshore. The theory is that they are saving a lot of money. However, there is a growing suspicion that many of these buyers don't actually know what their total costs are. In too many instances the buyer is only comparing the quoted cost of U.S. and Chinese parts without taking into account all of the other obvious and hidden costs. The failure to know the true total cost of offshore molded parts is a case of mismanagement by buyers.

This off-shoring of injection molded parts has been going on long enough to have become a common practice. Buyers are now so accustomed to off-shoring that they will no longer make the effort to request a quotation from domestic suppliers. The new world-class injection molders who have survived globalization are not only competitive but they also provide all of the advantages of a local source. In many cases these domestic molders can help OEMs reduce their overall cost. This is especially true for molding operations that can be automated.

In my opinion it is another example of buyers' mismanagement to not at least test the market by securing domestic quotes. If I am wrong again it won't take long to find it out.

(1) Society of the Plastics Industry