Until recently, vacuum maker Bissell viewed the costs of its outsourced plastic parts as largely inscrutable, simply accepting their price structure and design facets as delivered.

Until recently, vacuum maker Bissell viewed the costs of its outsourced plastic parts as largely inscrutable, simply accepting their price structure and design facets as delivered.

"Through 14 years of operating on a contract manufacturing model, [Bissell] had moved more to considering our contract manufacturing as a kind of black box, but due to the nature of our business, we really have to understand the costs," explained Hank Marcy, senior vice president of product design and engineering. "Having visibility to cost information is pretty difficult. We don't have a factory where our engineers can walk out and see what the impact of some of their decisions are."

Patented by Melville Bissell in 1876, the original Bissell Carpet Sweeper was first built on a large scale six years later when the company opened its initial manufacturing plant in Grand Rapids, MI. Bissell still has a large presence in Michigan, but to remain price competitive with its fellow vacuum makers, it followed them in moving much of its manufacturing offshore.

In addition to that business decision obscuring Bissell's vision into its suppliers' cost structure, the lack of an internal shop floor also meant the company didn't always appreciate how some of the choices made at the CAD stage of product development would ultimately impact a finished vacuum's costs.

Seeking greater transparency
Shortly after joining Bissell in the spring of 2010, Marcy became aware of aPriori's product cost-management software. Sold on its potential to bring greater transparency to the cost structure of its supply chain as well as the impact of its design choices, Bissell began a trial of the program that winter. 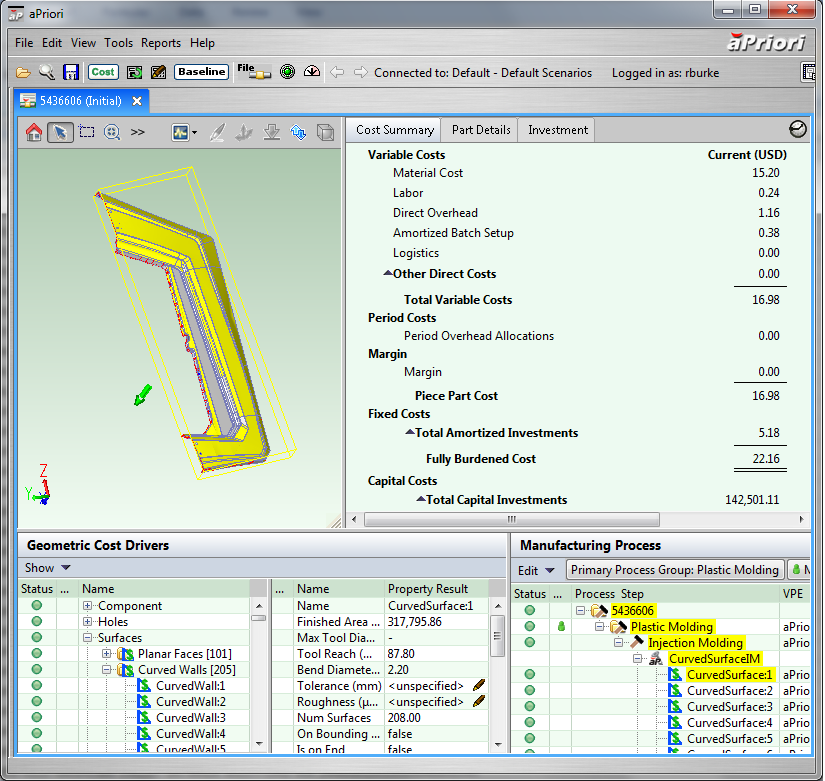 "It's been a bit of a journey," Marcy said. "Basically, what you have to do is build a cost model within aPriori. They call it a virtual production environment. Turns out if you don't have your own factory, [that process] is pretty interesting."

Plastics play a huge role in Bissell's products, and they must fulfill form and function roles economically.

"Most of our structural parts are also cosmetic, there are always trade offs," Marcy said, listing elements like texture, finish, and gloss. "The battle is always, 'Where are you going to spend the money?'"

Once key decisions are made on how to balance looks and durability, the nitty gritty of design work begins, with Bissell using aPriori to make more cost-effective decisions. "[aPriori] was really all about estimating the cost of the plastics parts as we designed them," Marcy said. "So as CAD designers are doing the detailed design, even early on when selecting wall thickness, for instance, they could look at

different trade offs and work with our suppliers on how the part will be molded; if it's four cavities, what size machine, etc."

Informed supplier negotiations
Armed with smarter designs and greater insights into the implied costs of those designs, Bissell soon addressed what it saw as discrepancies in the pricing of some of its suppliers.

"We can, with a high degree of certainty, indicate where costs are out of whack," Marcy said. "We can't really argue if what the supplier is saying and what we're saying is really close, say a few percent, but when they're not close at all, we now have information with which to argue. Engineers and CAD designers and sourcing are getting more and more confident and have more and more tools to get the right cost for our products."

Bissell, in conjunction with the Indian firm HCL Technologies, uses aPriori software and other programs to create virtual production environments wherein its own and competitor products can be torn down to create cost models.

"If I'm estimating the cost of a Hoover or a Dyson," Marcy says, "I can estimate tooling costs, cycle times, so I can create, at least in my cost model, a very detailed understanding of the cost of the products."

Nearly three years into using the program, Marcy said what had been a black box at Bissell is now an open book and its cost models are no longer "out of whack" with what his suppliers are charging.

"[aPriori] has really broadened our understanding, as well as, our ability to have very detailed conversations with out suppliers."