How machine makers are breaking the medtech mold at NPE2015 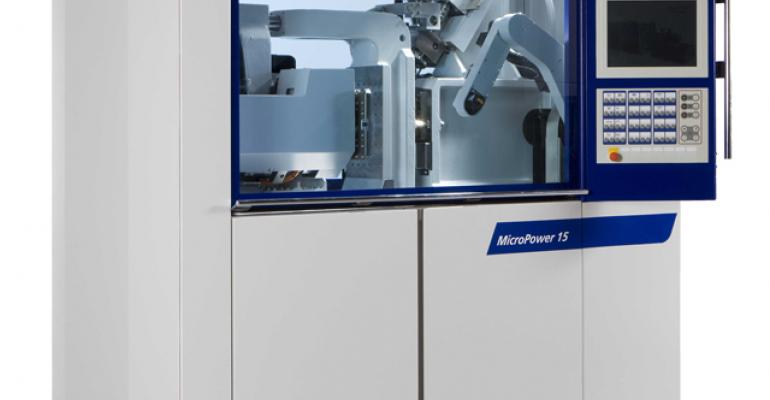 Since 2009, the NPE Content Committee at SPI: The plastics industry association has made an effort to reinvigorate the event and align it with markets, says committee member Michael McGee. "One of those markets is the medical device sector," he adds. Exhibitors have embraced the concept, and several makers of molding equipment will be showcasing innovative medical applications at the event in Orlando, FL, next month.

Since 2009, the NPE Content Committee at SPI: The plastics industry association has made an effort to reinvigorate the event and align it with markets, says committee member Michael McGee. "One of those markets is the medical device sector," he adds. Exhibitors have embraced the concept, and several makers of molding equipment will be showcasing innovative medical applications at the event in Orlando, FL, next month.

Medical applications will play a prominent role at the Engel booth (W-1303), where the emphasis will be on achieving cost savings by reducing cycle times and increasing yield, along with integrating process steps. Engel will be running a couple of applications on the show floor to illustrate these concepts, one of which is a drip chamber produced with an integrated filter for blood transfusions.

"Drip chambers are well-known products that typically require two or three machines," says Christoph Lhota, Vice President of the company's medical business unit at its global headquarters in Schwertberg, Austria. In conventional methods, two hollow-body components are individually injection molded, and the inlay is fitted and bonded in subsequent process steps. "Engel's system combines these three process steps in a single operation, where the chambers are injection molded, fitted with a filter, and joined via overmolding with PP," explains Lhota. At NPE2015, the drip chambers will be molded on an e-victory 310H/80W/50V/180 system.

"Our cleanroom molding cells include full automation and parts inspection systems," adds Jeff Hershey, Manager of the medical business unit for North America. "Some are developed in house, and some with partner companies. We call on partner companies for automation, for example, when they have specialized systems and expertise that can reduce costs for our customers." A case in point is the e-motion 440/240 T US, which will be molding a needle holder for insulin pens at NPE2015.

The cores of the 96-cavity mold measure just 0.3 mm in diameter, and to prevent deformation of the small cores, the electric injection unit is equipped with a direct drive that achieves injection speeds up to 500 mm/sec. The all-electric machine has a cycle time of approximately 3.5 sec.

Sonny Morneault, National Sales Manager at Wittmann Battenfeld Inc., also sees machines with a small footprint as a key demand among medical molders. "We had one medical customer in Texas that had a cleanroom designed to hold 16 machines from a competitor, says Morneault. "Using our EcoPower systems and Insider Package, he was able to fit 21 machines into the cleanroom, with plenty of operating space left over."

Medical customers, especially those who are molding implantable products, are also understandably concerned about material waste, says Morneault. "With implantables, it's vitally important to minimize material waste," says Morneault, "because the materials are very expensive and cannot be recycled for implantable applications. We had one customer from the medical industry who came by the other day who was using a material that cost $5500/kilogram!"

Small footprint machines that prevent material waste will be front and center at the Wittmann Battenfeld (Torrington, CT) booth (W-2743), where punctal plugs for eye tear ducts will be molded on a MicroPower 15/10 machine. The part will be produced in a four-cavity mold, supplied by M.R. Mold & Engineering Corp., from two-component liquid silicone rubber, supplied by Momentive USA. A dosing pump supplied by Fluid Automation will convey the material.

The machine on display will be a full-fledged cleanroom production cell with a rotary platen, parts-removal robot, and integrated quality inspection. Injection molding and parts inspection and depositing is all performed inside the cleanroom.

Another MicroPower machine will be running at the Burteck LLC booth (S-35013), where it will be molding vascular clamps.

Micromolding will be a key theme at booth W623, where  Sumitomo (SHI) Demag (Strongsville, OH) will mold a miniature POM gear used in a novel cataract surgery device.

The 0.524-gram gear, measuring 0.775 mm in diameter and with just 85 microns of space between the teeth, will be molded on a SE30DUZ direct-drive all-electric machine. Sansyu FineTool (Takahama City, Japan) built the single-cavity cold-runner mold, which will be loaned to Sumitomo (SHI) Demag by micromolder Makuta Technics (Shelbyville, IN). A robot from Yushin America Inc. will remove the micro-sized part.

The gear rotates a surgical blade in a cataract surgery instrument developed by Eye Care and Cure (ECC; Tucson, AZ).

"When you consider the micron-measured precision requirements of the gear teeth on this part and the importance of the function they perform, it's hard to think of a better way to showcase the precision capabilities of our equipment," says John F. Martich III, Vice President and Chief Operating Officer of Sumitomo (SHI) Demag's U.S. operations.

Over at the Arburg booth (W-3729)—if you can take your eyes off the two Freeformer additive manufacturing systems that produce plastic parts from standard granulate without a mold, which are being introduced to the North American market—you will have an opportunity to admire the Allrounder 520 A. The GMP-compliant, stainless-steel electric machine, equipped with a high-performance mould from Tanner and robotics from Hekuma, will mold 64 pipette tips in a cycle time of around 4.8 seconds.

Husky Injection Molding Systems (Bolton, ON, Canada) will focus on the recent acquisition of Swiss moldmaker Schöttli as part of its medtech messaging. Schöttli has built an enviable reputation over the years as a company that makes high-quality, precision molds for the production of parts such as syringes, infusion systems, and diagnostic products. At booth W-2117, Husky will showcase how its targeted, tooling-first technology for select medical applications can benefit customers.

NPE2015 comes to the Orange County Convention Center in Orlando, FL, from March 23 to 27. For more show news, tune into the NPE Channel on PlasticsToday.