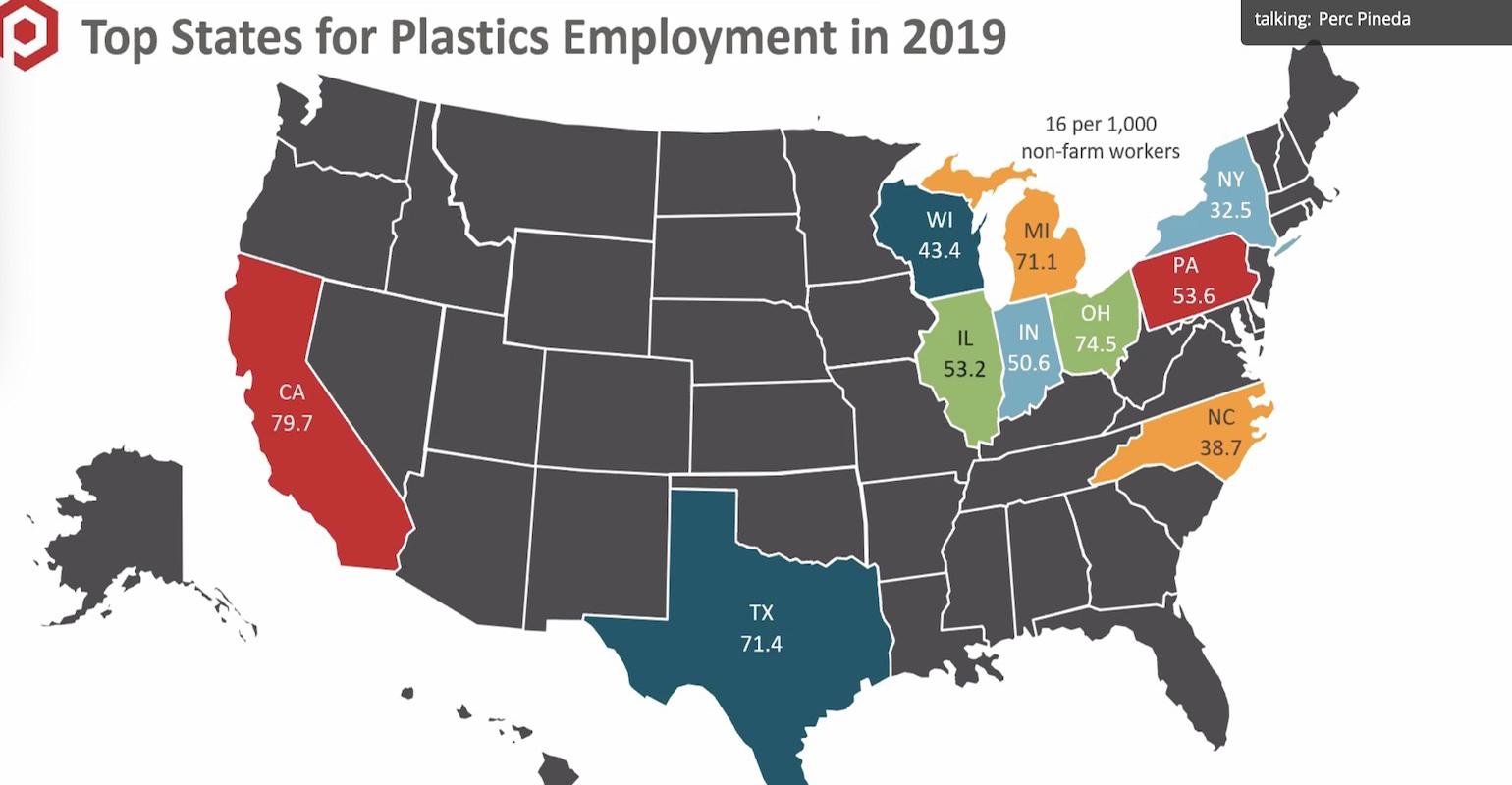 The Plastics Industry Is Essential to the US Economy

The US plastics industry accounted for an estimated $432 billion in shipments and more than one million jobs in 2019, according to the "2020 Size & Impact Report" from the Plastics Industry Association.

Plastics are critical to the US economy. According to the 2020 Size & Impact Report from the Plastics Industry Association (PLASTICS), the US plastics industry accounted for an estimated $432 billion in shipments and 1,003,000 jobs in 2019. If you include its upstream impact, plastics industry employment grew to an estimated 1.5 million and shipments totaled $549 billion, according to estimates based on the most recent data from the previous year.

In spite of the wars being fought against various plastics and the additives used to give them properties that provide many useful benefits, the plastics industry continues to be strong nationwide. At the state level, California’s plastics industry workforce is the largest, with an estimated 79,700 workers in 2019. That’s in spite of the fact that California fights harder than just about any other state to get rid of plastics and plastics manufacturing, primarily in packaging applications.

Second place for workforce numbers is Ohio with 74,500 workers. Texas comes in third with an estimated 71,400. Indiana and Michigan have the highest concentration of plastics industry workers, each with an estimated 16 plastics employees for every 1,000 non-farm workers.

“Plastic is one of the most advanced and useful materials humanity ever created, contributing to longer, healthier, and better lives for people around the globe,” said Tony Radoszewski, President and CEO of PLASTICS. “It’s also quite economically important to communities across the country.”

Over the past two decades, plastic has contributed to the economy not only through the manufacture of new resins and new applications, but through the upswing in recycling, both mechanical and advanced chemical recycling. Advanced recycling, through proprietary chemical reprocessing, can break down plastic into various components for manufacturing new plastics and even to produce fuel.

There are some naysayers who claim that true recycling of plastics requires the material from one product — a PET bottle, for example — be used to produce more bottles. They claim that advanced chemical recycling is not true recycling because the end products are gases, chemicals, and other products used to make new plastic resins. However, any type of recycling is economically viable and environmentally beneficial to the Earth.

“To protect jobs as well as the environment, we at PLASTICS support domestic and international infrastructure improvements to reuse, repurpose, and recycle more material,” said Radoszewski. “This would help to preserve and extend the benefits of plastic and plastic products, and create innovation, jobs, and economic growth, important to the current recovery.”

We can’t give up on recycling plastic now, no matter what technology is used. An article in Bloomberg last month by Adam Minter reminded readers that while there has been some doubt about the benefits of recycling, "recycling is as old as manufacturing." We’ve had other waste problems, such as abandoned cars that blighted the landscape in the 1950s and 1960s and glass soda bottles that littered the roadways, until someone found the value in recycling and reusing what was considered junk.

Some consumer products companies are beginning to establish their own recycling facilities to support sustainability efforts while taking responsibility for the many plastic bottles and other containers they use in producing their food, beverages, and personal care products.

The full report can be downloaded from the PLASTICS website.