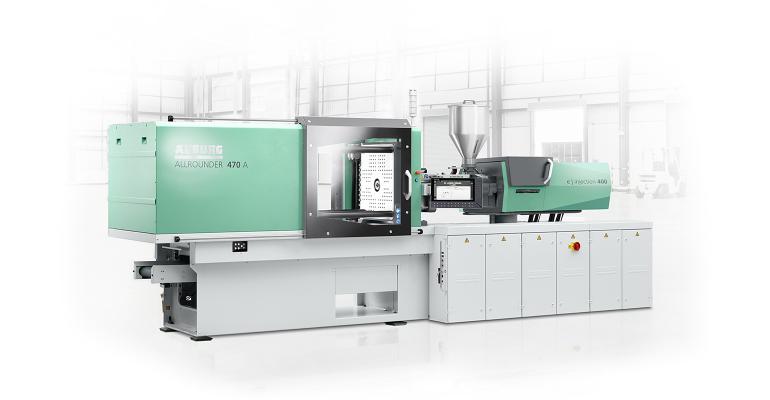 The stamp-sized watermark is applied directly via the mold cavity surface of the Allrounder 470 A to the molded part.

Arburg will bring an Allrounder 470 A injection molding press to Plastec West in Anaheim, CA, in February as part of a cell demonstrating the automated production of digitally watermarked caps from recycled materials.

The digital watermark is postage stamp–sized coding that is applied directly via the mold cavity surface to the molded part. The watermark is invisible to the end consumer. No post-printing or etching is needed. A high-speed camera can read the mark and identify the material constituting the molded part during automated sorting at recycling centers.

At booth 4001 in hall B, the 110-ton press with a 6.1-oz injection unit will be equipped with a six-cavity hot runner mold provided by Barnes Molding Solutions. The closure caps are made of K Resin ECO KR01 from Ineos Styrolution, which contains 70% recycled content. A vertical Multilift Select robot will remove the parts from the mold.

All peripheral devices in the production cell will be fully integrated into the Gestica machine controller. Connection to Arburg’s host computer system allows production data to be recorded and analyzed in real time, significantly increasing production efficiency and transparency, according to the company, which has its international headquarters in Lossburg, Germany. Through its remote service program, Arburg experts can gain external access to an injection molding machine's control system via a protected and encrypted data connection. In conjunction with on-site staff, malfunctions and standstills can be analyzed efficiently, cutting down time and saving costs, said Arburg.

Arburg will also display its Freeformer 300-3X for high-temperature applications at Plastec West. It has a build chamber that can be heated to 200°C, and discharge units can process plastic granules up to a temperature of 450°C. The machine will be manufacturing a ventilation duct for the aerospace industry made from Ultem 9085.

Plastec West is co-located with four other events, including Medical Design & Manufacturing (MD&M) West, at the Anaheim Convention Center on Feb. 7 to 9, 2023. The event is organized by Informa Markets – Engineering, which also produces PlasticsToday.

"Plastec West is second only to NPE in terms of importance for Arburg in the United States,” said Friedrich Kanz, Managing Director of Arburg Inc. in Rocky Hill, CT. "The fact that [four] other fairs are taking place at the same time in the same building makes this event particularly attractive. Many injection molding companies also exhibit at MD&M, which is dedicated to medical technology, for example."