The company's introduction to the North American market began last year with booths at NPE2012 in Orlando and Expoplast 2012 in Montreal. The company is represented in North America by Plastics Plus, a custom injection molder based in Hamilton, ON, which was the first North American company to purchase a Borche machine. 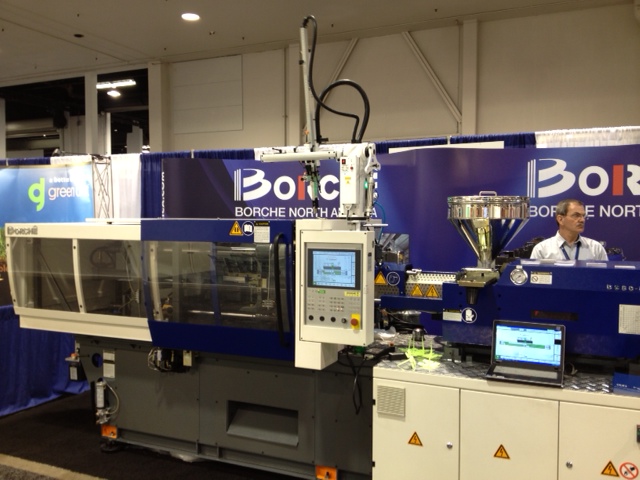 Ken Mermuys, son of Plastics Plus president, Larry Mermuys, said his father settled on Borche machines when he was looking to "buy machines but not go bankrupt." At this time, the company has 15 Borches that it runs in Hamilton, and it has sold 20 more into the North American market, where it has exclusive distribution rights for Canada, the U.S., and Mexico.

At Plastec West, an 88-ton all-electric Borche machine molded small clips for hockey pants, which were removed by a three-axis robot. Borche Machiney Co. Ltd. was founded in 2003 in Guangzhou. It has two production and research centers, located in Guangzhou and Hangzhou, and total production space covers 180,000 square meters with annual production capacity for more than 15,000 injection molding machines, according to the company.

Plastics Plus is a family owned, custom injection molding company founded in 1984. The company employs 75 people and operates from a 44,000-sq-ft building in Hamilton, ON. It runs 20 injection molding machines in total, ranging in size from 80 to 720 tons.

Mermuys said his company will represent Borche at more North American shows in 2013, including stops at PLASTEC Midwest, PLASTEC East, Plast-Ex, and Plastimagen.