The evolution of NPE: A new role for the trade show? 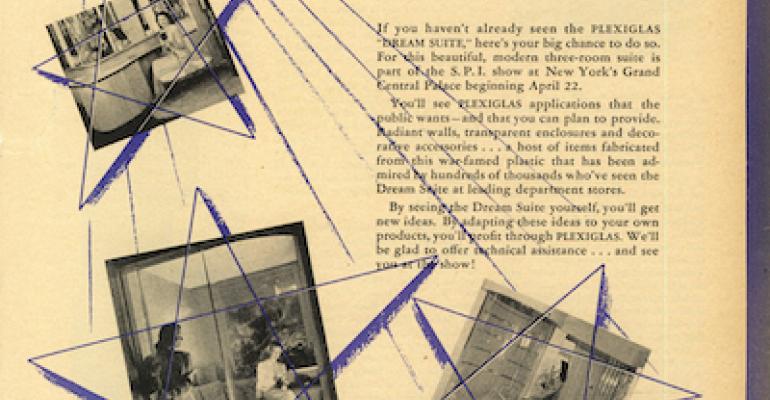 A lot has changed in the industry over the years, and the NPE shows have provided a portrait of those changes. But a lot has stayed the same, too. Industry people still love attending NPE with their peers, their potential customers and their suppliers.

At the start of this month, I wrote about the earliest days of NPE, starting in 1946. My personal experience of NPE began with my first visit to Chicago in 1994, which in itself was exciting. My fellow journalists—I was with a different publication at the time—loved Chicago and after the show they would drag me around to all the blues bars. I usually ended up taking a taxi back to the hotel by myself around midnight, as I’ve never been a night person. It was fascinating, however.

Even more fascinating was the size of McCormick Place and the number of plastics companies gathered there. Being a machinery lover since my childhood—my dad was a tool and die maker and wood worker, so machinery was always part of my life—I couldn’t get enough of watching the machines run. Setting up what amounted to a small injection molding plant at NPE was a monumental task, but the results were amazing.

At that time, NPE was the time and place for releasing all things new and exciting: New technologies, new machines, new materials and new ideas. Companies kept everything under wraps until the opening day of the big show. That made it even more exciting for industry journalists such as myself. We grabbed up company brochures and press kits (all printed out, of course), did dozens of interviews and spent late afternoons into the evenings working to get the news out.

By the time NPE 1997 rolled around, the plastics industry was booming thanks to a bull economy during the Clinton years. Molders couldn’t buy enough machinery and equipment. Every time they got an order from a customer for a new molding program, they bought another molding press. At least, that’s the way it seemed. I can remember one molding machine maker telling me he had to back-order presses just to have enough to bring to NPE. Some were sold before the show but kept for the event and shipped to the customer from the NPE floor.

NPE 2000 was the absolute climax of NPE trade shows to that point. After-hours events were amazing parties at some of the most spectacular venues in Chicago. There were even sports celebrities in attendance, brought in by various companies. They went all out to showcase technology that promised to improve capabilities and increase productivity. To do that, automation was the star of the show. With all the demand for increased molding capacity the 1990s had brought on, automation seemed to be the answer to speeding things up—getting more parts in boxes faster—and improving quality. Nearly every press at the show had a robot on it. It was really the beginning of a rush to automate every press in the plant.

Another technology that became big was hot-runner systems, which also helped molders increase productivity and improve quality while reducing scrap. Mold-Masters (whose CEO at that time was Jonathon Fischer) threw a bash at the Chicago Museum of Science & Industry, where probably 200 of us enjoyed a sumptuous dinner.

The big corporate story was Enron, and that company’s ad dollars were evident everywhere. We all know how that ended.

When the mini-recession hit and Enron failed, the plastics industry also took a hit. It was palpable in the 2003 and 2006 NPE events. The mood was more cautious and conservative; less extravagant, for sure. By this time, the Internet was becoming a big marketing tool, and because competition for machinery and equipment had become stiff because of a glut of molding machines on the market as work dropped off, no one waited until NPE to showcase the latest and greatest.

NPE 2009 proved to be sluggish, as the big recession kicked into high gear. Reports about NPE 2009 used phrases like “attendance was down” (44,000 visitors) and people were “cautiously optimistic,” as 1,851 companies exhibited in just under one million square feet of space at McCormick Place. It was time for a change.

People don’t like change, and when SPI (now PLASTICS) announced that the show would be moved from Chicago to Orlando, FL, doubts about the event’s future flew around the industry. NPE 2012, however, surprised everyone: Rave reviews from exhibitors and attendees alike confirmed that NPE 2012’s new venue was a success.

Taking the show by storm were new technologies such as in-mold labeling, which was showcased by a collaborative effort among the moldmaker, hot runner company, label maker, automation manufacturer, material supplier and molding machine maker.

Another new technology that began taking center stage at NPE 2012 was 3D printing/additive manufacturing and the speculation that it would one day replace the need for molds and molding via injection molding. Everyone was curious about those prospects!

NPE 2015 stayed in Orlando, as will this year’s event. Change turned out to be good for the industry and its massive trade show.

The biggest difference I’ve noticed over the years—which is confirmed by many of the machinery and equipment makers I’ve talked to—is the decline of really big technical advances in molding and moldmaking. It seemed to go from giant steps in plastics processing to smaller steps tweaking the various technologies.

You may not find any huge technological advancements at NPE 2018, but you will find some new and perhaps even exciting things at the show. Regardless, you will gain the benefit of talking with your peers, “kicking the tires” of that molding machine you’ve been thinking you want, and seeing all things in the world of plastics manufacturing. The entire supply chain is present at NPE, which is a huge benefit and one you need to take advantage of.

A lot has changed in the industry over the years, and the NPE shows have provided a portrait of those changes. But a lot has stayed the same. Industry people still love attending NPE with their peers, their potential customers and their suppliers.

Here’s wishing everyone a great NPE2018!