At Fakuma, Plastics Industry Welcomes Return to Normalcy, But Worries About Uncertain Future 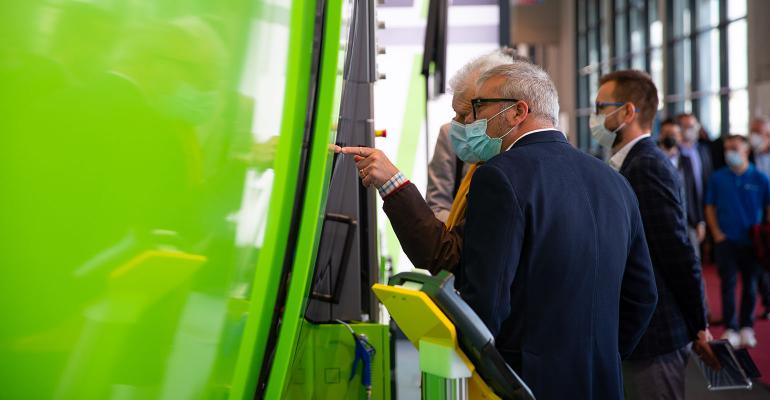 Exhibitors at the plastics processing trade show in Germany expressed a cautiously optimistic outlook for the industry, while acknowledging that raw material shortages, supply chain issues, and overall volatility could derail a full recovery.

After a COVID-induced hiatus, Fakuma came back to Friedrichshafen, Germany, this year, and so did I. One question swirled around my mind: It looked like the exhibitors by and large were going to show up — almost 1500 had booked exhibition space — but what about attendees? I got my first inkling driving to the messe from my hotel just across the Austrian border. The B31, which typically resembles a parking lot once you’re within 10 miles of Friedrichshafen on a show day, was remarkably free of stau. Uh oh. That proved to be a good barometer, as attendance on day one of the show seemed lighter than normal. No alarm bells were sounding among the exhibitors I spoke with, however. Their attitude was to wait and see how the next three days would unfold. As it turned out, people did flock to the event, perhaps not in the numbers of past years, but, by all accounts, good enough, perhaps even exceeding exhibitors’ tempered expectations. I should note that these are my personal impressions, as the show organizer has not yet released attendance figures.

As you might imagine, there was palpable delight at re-engaging at an event that was not mediated through a screen. Arburg’s slogan, “Wir sind da,” took on added resonance, which the molding machine maker played up at its press conference.

Arburg has a “very positive” outlook going forward, said Jürgen Boll, Managing Director, Finance. Incoming orders are twice as high as the same period in 2020, he noted, adding that the company is headed back to 2018/2019 levels. “And 2018 was our best year ever,” stressed Boll. He did acknowledge, however, that the resin squeeze and general economic unpredictability cannot be discounted. Arburg, he added, saw the strain on raw materials supply coming and acted accordingly. “We feel the stress,” said Boll, “but we have not experienced any shortages so far because we planned ahead and increased our inventory.”

At its stand, Arburg showcased new features in its arburgXworld portal designed to facilitate injection molding for users and promoted its arburgGREENworld initiative geared to sustainability, a common theme throughout the show. The Allrounder More press on display at the stand got a lot of attention from attendees. The multi-component injection molding machine offers more space for larger molds, more modularity, and more optimized features. Yeah, there was a lot “more” there.

Engel ‘jolted’ out of the crisis

If anything the mood was even more upbeat at the Engel press conference. “The recovery has been faster than we expected,” said Christoph Steger, Chief Sales Officer. As an example, he cited incoming orders, which will be up at least 30% year-on-year at the end of FY 2021/2022 in March. “We were jolted out of the crisis!” said Steger.

One possibly lasting jolt is a shift in demand. The technical molding business unit, which includes sport and leisure products, household goods, and building and construction, had its highest share of sales volume ever in the current fiscal year. It has “caught up with automotive in Engel’s revenue distribution and is expected to remain at a comparable level in the coming years,” said the company. Ebbing demand from carmakers certainly contributed to this shift. Equipment makers and, indeed, plastics processors up and down the supply chain have been hit hard by the automotive industry slump caused by a chip shortage. This, too, shall pass, but it may be some time yet before the market fully recovers.

Engel echoed Arburg’s concerns regarding “delivery bottlenecks in raw materials and components” and overall volatility in the market. A well-integrated supply chain and global network of plants will prevent any delays in delivery, stressed Steger.

The Plastics Industry Association (PLASTICS) released its annual Global Trends report at Fakuma, providing a nuanced analysis of the current state of the US and global plastics markets. Echoing many of the sentiments expressed by Fakuma exhibitors, the report painted a cautiously optimistic portrait of the industry — trade volume in the US industry rose 27.9% year-on-year in the first six months of 2021 — but it “still has a trade deficit,” commented PLASTICS Chief Economist Perc Pineda. That deficit amounted to $5.5 billion in 2020. By contrast, the US plastics industry had a trade surplus of $727 million in 2019.

China was the third largest export market of the United States, accounting for a $15.3 billion deficit. “However, the United States had a $3 billion trade surplus with China with resin,” noted the news release announcing the report.

Other key stats from the 2021 Global Trends report: