The future of smart manufacturing 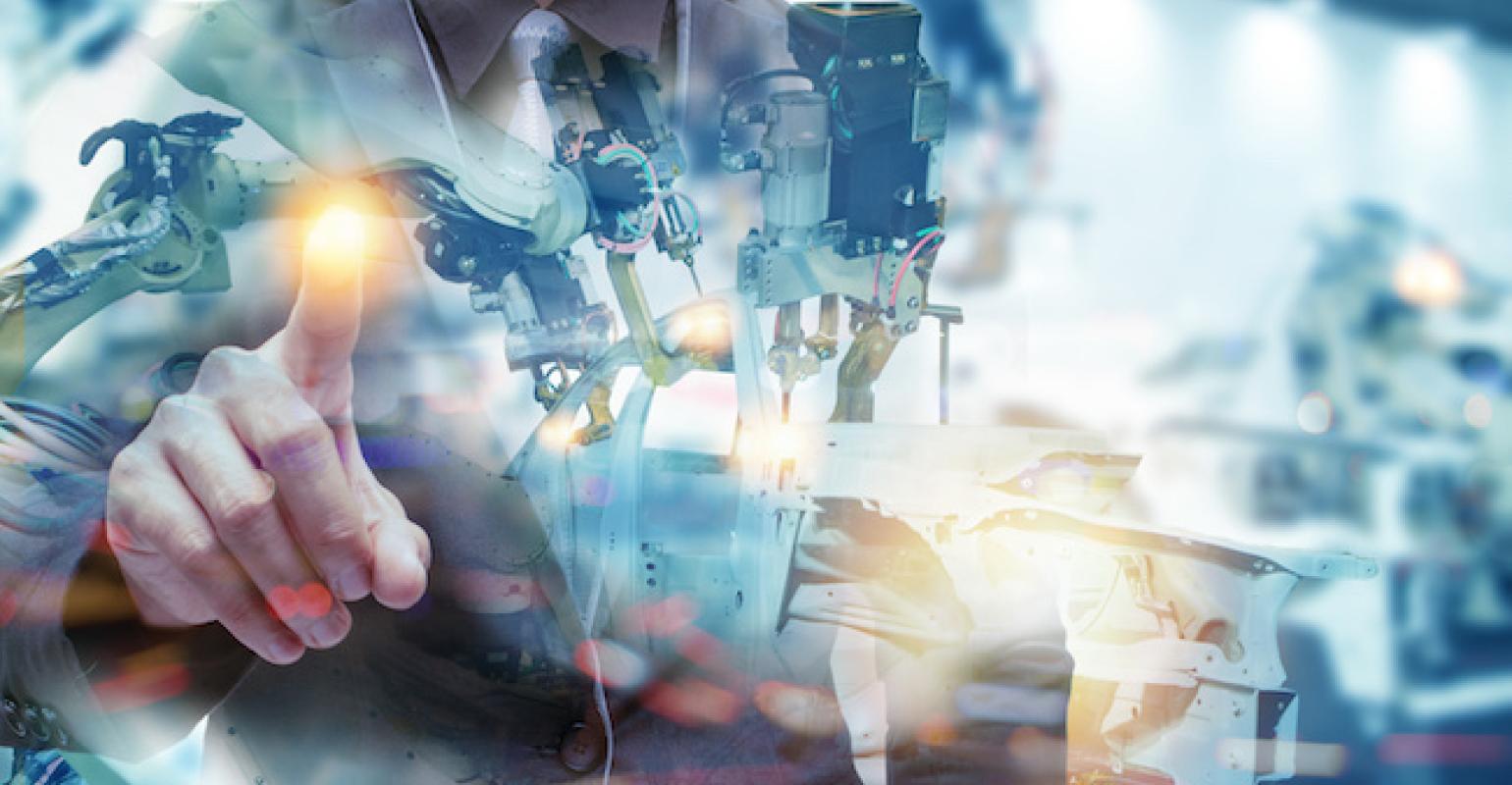 More than 85% of industrial manufacturers believe that smart factory initiatives will be the main driver of manufacturing competitiveness in the next five years, according to one recent survey. Are you ready for the fourth industrial revolution?

Industry 4.0 began to enter the manufacturing lexicon around 10 years ago. Dubbed the fourth manufacturing revolution by its German architects—the industrial revolution, the invention of mass production and the development of information technology are the first three—Industry 4.0 can be defined in its simplest terms as the use of “information and communication technologies to digitize processes, resulting in better quality, lower costs and more efficiency,” wrote Karen Laird in a special report published by PlasticsToday. “At the basis of this industrial digitization are so-called cyber-physical systems, which integrate the physical and virtual worlds,” explained Laird. “In a production environment, this means integrating operating technology with information technology, something that is accomplished by using embedded systems to monitor and control physical processes. Connecting all these sensor systems in networks to computing systems results in the emergence of what today is called the Internet of Things (IoT), in which enormous amounts of data are collected, analyzed and communicated. Intelligence is no longer centralized in one place, but is distributed across the entire system, to be accessed by machines, devices and users,” writes Laird in the report, which is available as a free download on the PlasticsToday site.

Early on, there was a lot of hype around the concept—Industry 4.0 quickly became a buzzword throughout the K show. Today, and especially in North America, one is likely to encounter the more pragmatic terms “smart factory” and “smart manufacturing,” but make no mistake: The tools—sensors, robotics, digitalization, industrial IoT (IIoT) and deep data analysis—as well as the objectives—increased productivity, a competitive advantage vis-à-vis low-wage countries—are largely synonymous. Call it what you want—its impact on first-world manufacturing is inescapable.

A joint study by the Manufacturer’s Alliance for Productivity and Innovation and Deloitte published in September 2019 found that more than 85% of industrial manufacturers believe that smart factory initiatives will be the main driver of manufacturing competitiveness in the next five years. The BMW plant in Regensburg, Germany, shows why.

Dubbed a “factory of the future” by the World Economic Forum, the BMW plant produced approximately 320,000 vehicles in 2018. By introducing Industry 4.0–inspired technologies—sensors, robotics, autonomous transport systems, data collection and IIoT—the amount of time needed to deploy new applications was cut by 80% and quality issues were reduced by 5%, according to a report filed by CNN on Jan. 23, 2020.

"A smart factory is characterized by a smart way of using new technologies, [and] new ideas to get innovations on a next level," Frank Bachmann, BMW Regensburg Plant Manager, told CNN reporters Jenny Marc and Nell Lewis. “There are more than 3,000 connected machines, robots and autonomous transport systems at the plant. A custom-made Internet of Things platform links these tools with materials and parts, which are given laser-printed labels at the outset—allowing information to be analyzed and tracked every step of the way,” they write. That means any problems in the supply line can be alerted. For instance, if the system detects strange noises, mechanics are notified, and the problem can be fixed immediately.

It’s a testament to today's dizzying pace of technological change that artificial intelligence (AI), as such, is barely mentioned in the early days—and by this I mean less than 10 years ago—of Industry 4.0. Now, AI is a key element of the smart factory. Anna-Katrina Shedletsky, CEO and founder of Instrumental, a company that uses cloud-based data aggregation to perform failure analysis, will explain how to leverage AI to diagnose defects and increase yields at the forthcoming co-located PLASTEC West and Medical Design & Manufacturing (MD&M) West event. A mechanical engineer who worked for six years at Apple, Shedletsky is one of several speakers doing a deep dive into the factory of the future at the Smart Manufacturing Innovation Summit during the trade show and conference in Anaheim, CA, on Feb. 11 to 13, 2020.

“A lot can happen between the time a plastic part comes out of the molding machine and when the finished and assembled unit comes off the final assembly line. While AI can be a tool to improve quality and increase yield, in isolation it’s likely not enough,” Shedletsky explained to PlasticsToday. Where AI is very helpful, she added, is for parsing through product and traceability data to identify relevant information for engineering and production teams.

The manufacturing optimization system developed by Instrumental collects images at key assembly instances—when the part leaves the mold, during downstream processing and so forth—and intelligently transforming that data to detect defects and shifts. These insights are presented contextually to engineers, enabling them to close the loop by implementing and validating a corrective action, said Shedletsky. “Plastics processors have used this technology to rapidly identify and understand the root cause of molding defects and to effectively pinpoint where damage or defects occurred within the supply chain,” she explained. Having a photographic record of every unit made is valuable, too, added Shedletsky. “We’ve seen customers correlate failure modes by cavity to accelerate failure analysis and defend downstream quality complaints by sharing data with their customers. For mission-critical parts, such as those used in medical devices, this kind of traceability can be priceless.”

As an example, Shedletsky shared with PlasticsToday how Motorola Mobility used Instrumental’s technology to identify the root cause of a part defect that saved the company considerable resources. Within the first few days of a development build, a Motorola engineer noticed a camera concentricity issue. By digging into the Instrumental data record, he discovered that the root cause came from the tooling used for the plastic trim. “The engineer collected a series of images and made a GIF that he shared with his supplier so that the team could collaborate on fixing the underlying root cause,” said Shedletsky. “The supplier recognized the issue immediately and was able to make a fix before tool replication, saving Motorola over $100,000.”

Getting smart about operational data gathering is a key manufacturing trend that Simon Kampa, founder and CEO of industrial software firm Senseye, is watching this year. “2020 will be the year large industrial organizations get smart about the data they gather from their operational environments,” he wrote recently in SmartIndustry. “Manufacturers recognize now that they need consistent, meaningful and comparable data sets to optimize their production processes. They are moving away from wasteful practices that involve gathering all the data they possibly can and looking for new sources of meaning and value in these vast, unstructured sources. Their focus has moved to specific data sets, such as asset-condition indicators, that industrial organizations can be sure will add value,” writes Kampa.

Manufacturers sometimes overthink data collection and analysis, Rodney Rusk, Industry 4.0 Leader at Bosch Rexroth, told PlasticsToday. “When most of us think of data collection, we often default to thinking of Big Data when, in fact, data collection can be as simple as the use of Overall Equipment Effectiveness (OEE) analysis tools, or taking the time to evaluate what data is being currently collected,” said Rusk. “How and why is it being gathered? And where is it being stored?”

He cites one example of a company that was collecting the same data points via multiple databases in several departments with no linkage to each other. The site had 14 different databases running. After reviewing its data strategy, the company reduced its databases to seven and discovered that it was collecting data that had no value. In some cases, it couldn’t explain why it started collecting that data in the first place, said Rusk.

“This proliferation of duplicate work means that valuable resources are not being spent wisely. By putting in place a holistic data collection strategy, duplication can be eliminated through database consolidation and the resources can be spent in other areas, such as connected manufacturing investments that address a critical KPI or ROI business case,” explained Rusk.

His company Bosch Rexroth will be exhibiting at ATX West next week, the automation show co-located with PLASTEC West and MD&M West, in Anaheim, CA. At the event, it will showcase steps companies of any size can take to implement the technologies of the factory of the future. The booth is designed to take attendees on an approachable, step-by-step journey to smart manufacturing, from simply applying digital assistant capabilities to manual production to adding modular technology that incorporates new sensors to capture production data and full Industry 4.0 connectivity across operations, said Bosch Rexroth. One of the themes at the booth is that even smaller manufacturers can achieve real, measurable results by implementing elements of Industry 4.0.

“Some of the most common improvements that we are seeing through the adoption of connected technologies are in production times, worker efficiency and even warranty costs by basing reporting on real data that show direct cause/effect correlations when dealing with a root cause analysis, explained Rusk. “By making smart choices that fit into their capabilities, manufacturers can implement connected technologies that do not break the bank but do set the stage for continued evolution. An unexpected result that we have seen is how the willingness of smaller manufacturers to evolve in this direction improves relationships with their supply-chain customers,” said Rusk. “The ability to talk in real data and real improvements raised their confidence level and made them more valuable within the supply chain.”

One thing that often gets lost in the shuffle when discussing the factory of the future is the human element. “Smart manufacturing is a lot more than a single technology and actually a lot more than just technology. Fundamentally, it's always first and foremost about smart people using smart technology,” writes John Clemens, Director of Manufacturing IT at Maverick Technologies, in a recent article in Forbes. Finding those smart people can be challenging. In the CNN article referenced earlier, McKinsey consultant Enno de Boer noted that “there is a big skills gap to be addressed—42% of industrial companies are reporting they are already experiencing a shortage of labor with [Industry 4.0] capabilities,” he told CNN. One silver lining on the horizon, however, is Generation Z, those born between 1997 and 2012.

As reported in PlasticsToday earlier this year, a survey conducted by Leading2Lean (L2L; Sparks, NV) found that 18 to 22 year olds are more likely to have had a counselor, teacher or mentor suggest they look into manufacturing as a viable career when compared with the general population. One-third (32%) of Generation Z has had manufacturing suggested to them as a career option, compared with only 18% of millennials and 13% of the general population. They are also more likely to consider working in the manufacturing sector and are less likely to view it as an industry in decline than other cohorts. Moreover, they are comfortable with technological change, which has been an integral part of their daily lives, and can readily adopt the skillsets needed to navigate the factory of the future. Keith Barr, President and CEO of L2L, which develops manufacturing software, will explain why Generation Z is a perfect fit for the modern digitized manufacturing plant floor and what industry must do to effectively engage this group in one of the sessions scheduled for the Smart Manufacturing Innovation Summit.

MD&M West and PLASTEC West attendees will have an opportunity to explore these topics and many more related to the smart factory at two one-day tracks during the Smart Manufacturing Innovation Summit: AI, Machine Learning & IIOT: Factors Affecting Factory Floor Adoption on Feb. 11 and The Rise of the Smart Factory on Feb. 12. See you there!