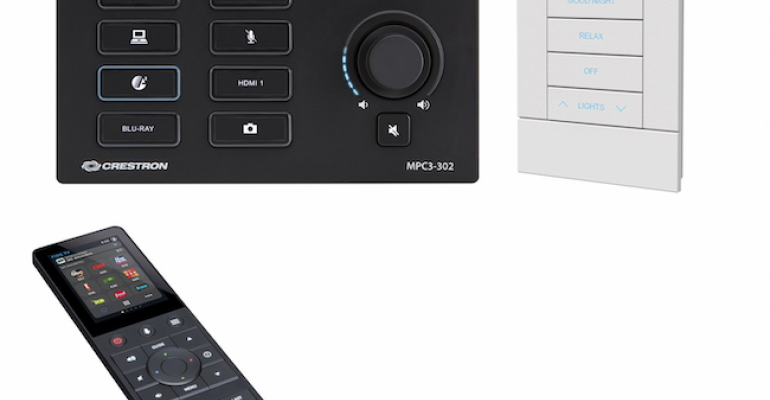 Laser engraving has replaced conventional two-part injection molding and rotary engraving as the preferred method for rapid production of custom day-and-night marks because of its speed, operational flexibility, and mark quality.

Crestron Electronics Inc. utilizes day-and-night marking to put characters and graphics on the plastic buttons of handheld remotes and keypads used with their various custom automation and display equipment for commercial, educational, and home environments. As its products have become more sophisticated, the company needed a way to move from simple alphanumeric markings to producing legends with graphics, logos, and so forth. Because of the small batch sizes — often just one or two units — the marking system needed to be flexible and allow custom marks to be rapidly defined and produced. This article reviews how a laser marking and engraving system from Coherent enabled Crestron Electronics to implement cost-effective day-and-night marking of plastic keypads in small quantities.

So, what is day-and-night marking?

To achieve the day-and-night night effect, a clear plastic button first is painted with a layer of semi-transparent dark paint. Then, a second layer of opaque paint in a contrasting (light) color is overlaid. The top layer of paint then is selectively removed to create the desired button legend (mark pattern) by revealing the darker layer beneath. When illuminated externally, the mark appears dark against a light background. Typically, an LED light source placed beneath the button illuminates it from within when the ambient illumination level is low. This light passes through the semitransparent dark paint, but is blocked by the opaque paint layer on top. This makes the mark appear light against a dark background. The exact opposite contrast — light mark on a dark button — can be achieved by making the first layer semitransparent light paint, and overlaying this with an opaque layer of darker paint.

The challenge for Crestron Electronics

In terms of manufacturing, the key imperatives for Crestron Electronics are the ability to produce very legible marks that present an appearance of “quality” congruent with its high-end brand image. Plus, the company increasingly needs to make marks that involve relatively complex logos and graphics, rather than just traditional alphanumeric characters. Since these marks usually are physically small, the marking system must be able to deliver high spatial resolution and sharp, well-defined edges.

The challenge for Crestron Electronics is that it makes custom products in small quantities — often just one or two units — purchased either by individuals, businesses, or institutions rather than consumer products made in volume. Thus, the marking process must be readily configured to produce a custom mark with minimal setup time and low complexity of part loading and off-loading within the tooling fixtures. Furthermore, Crestron Electronics has empowered its dealers and end users to create their own mark artwork, which is automatically transmitted to the manufacturing facility. The customized mark artwork design attributes are always benign to the laser parameter’s output. This provides full and complete flexibility of graphic design elements for the end user.

Two established methods for day-and-night marking are two-part injection molding and rotary engraving. Because of the small batch sizes, volume production methods, such as two-part injection molding, are not cost effective for Crestron Electronics. In this technique, two different plastics of contrasting colors are introduced into a mold sequentially, in order to create a final, layered part. This process requires expensive tooling and doesn’t work well for producing high-resolution marks on small buttons.

Traditionally, the alternative to molding for short batch runs has been rotary engraving with a steel cutting tool, which selectively removes the top layer of paint. The drawbacks of this method are a slow speed and uncontrolled finite cutting depth for producing complex graphics. Plus, the cutting tools wear and must be sharpened periodically, meaning both downtime and consumable costs.

Laser engraving has emerged over the past 20 years as the preferred method for rapid production of custom day-and-night marks because it offers an unmatched combination of speed, operational flexibility, and mark quality. In a laser engraving system for day-and-night marking, parts are typically placed in an enclosure (to ensure operator safety), and a laser beam is scanned over the surface under computer control to ablate the necessary amount of material in the desired pattern.

One of the major advantages of laser processing is that it can very precisely remove material to the desired depth. In other words, it can ablate the top layer of paint from the part without removing essentially any of the underlying paint layer. It also delivers high dimensional accuracy in the mark itself. The result is excellent quality and high part-to-part consistency in terms of mark appearance.

Crestron Electronics utilizes the Coherent LME-RM laser marking system in its production. This is a turnkey system that can be equipped with a variety of different laser sources for marking all sorts of materials, including metals, ceramics, and plastics. It is available with options, such as an integrated vision system for part positioning and mark quality control, as well as various part-handling and automation capabilities.

For plastics marking, the source is most typically a solid-state (vanadate) laser, since these provide the short pulse duration that usually delivers the most pronounced color or contrast change in the plastic without any thermal damage to the material. These lasers emit in the infrared, but their output can be converted into green or ultraviolet (UV) light, too. The UV output option is a common choice for marking polymers often used in medical implants. This same advantage — minimal heat-affected area — makes the solid-state laser the best choice for day-and-night marking, even though it is actually an ablation process, rather than one in which a color or texture change is induced in the bulk material, like with foaming.

In practice, producing a day-and-night mark typically involves making several passes with the laser, where each pass hatches out the mark shape and removes a small amount of material (total paint layer thickness typically is 0.0025 in.). There even may be “cleanup” passes at the end of the process to polish up the underlying layer that has been revealed so that it has the desired smooth texture and appearance.

The exact process recipe — number of passes, laser power, laser pulse repetition rate — varies depending upon the materials being ablated and the layer thicknesses. In order to speed development of new process recipes, the Coherent LME-RM laser marking can automatically run through several different sets of laser parameters to enable rapid identification of the optimum settings. Specifically, the system will automatically produce a grid of marks, where the laser power varies between each column and the laser repetition rate varies between each row, so that a large number of unique combinations are explored. Then, the operator examines the grid of marks and picks the settings that produced the best results. Plus, Coherent applications development engineers have a large database of existing process recipes that they can supply to users in order to provide a good starting point for this kind of optimization.

“Mark quality is our single biggest priority,” notes Keith James, Director, Strategic Supply Chain and Manufacturing Operations, at Crestron Electronics. “We wanted to offer customers the option of marking bitmapped images on our user interface products, but first we had to clear a hurdle to retain the same high level of clarity we achieve with text when marking a bitmap. Lowering resolution was not an acceptable tradeoff for us. One way the Coherent system solves this problem is by doing an outline around the bitmapped image after it has hatched out the mark fill. That eliminates any aliasing or ragged edges on the mark, and consistently delivers a sharp edge.

“The Coherent Visual LaserMarker (VLM) software also facilitates the whole process of producing custom marks,” adds James. “Using it, our dealers can bring up a keypad layout on their computer screen, define whatever symbols or nomenclature their customer requests, and then simply e-mail all that to our production order processing plant. Our internal production personnel can then produce that mark on the part, and the VLM software handles all the background tasks necessary to make that happen with almost no operator intervention. It’s an extremely user friendly environment, which an operator can learn to use in minutes, so our productivity is very high.

“Another reason we chose Coherent is that the marker can be configured with nearly any type of laser — fiber, solid-state, ultra-short pulse, and so on,” concludes Keith. “We are not laser experts and this technology breadth gives us confidence that we have configured the best laser system for our needs, rather than trying to define our application and match it to an obscure rack-and-stack technology someone else might just happen to sell.”

Marking with pulsed lasers is well-known to deliver excellent spatial resolution and contrast, making it ideal for producing both alphanumeric characters and logos/graphics. Day-and-night marking highlights another advantage of precision, pulsed laser marking, namely precise depth control. This allows spatially selective removal of a complete layer of material with no effect on the underlying substrate.