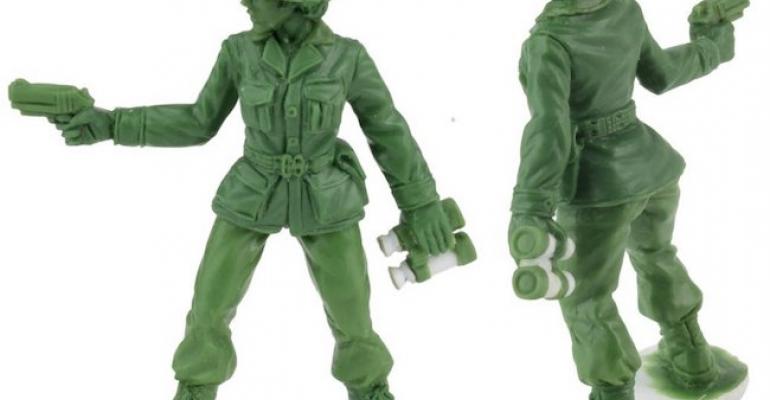 Six-year-old Vivian recently wrote a letter to toymakers, asking, “Why do you not make girl army men? My friend’s mom is in the army, too!” She found an ally in BMC Toys’ Jeff Imel.

Women have unofficially engaged in military combat for centuries—you might remember Molly Pitcher’s contribution during the Revolutionary War from your U.S. history class. But it wasn’t until 2013 that the United States eliminated the military’s ban on women serving in combat. The little green army men did not get the memo, however, and that irked a 6-year-old girl in Arkansas.

Vivian wrote a letter, asking, “Why do you not make girl army men? My friend’s mom is in the army, too! I would play with them every day, and my friends would, too.” Vivian, or rather her mom, sent the letter to a handful of toymakers, one of which was Jeff Imel, who runs BMC Toys in Scranton, PA. The company is specialized in the production of historically themed plastic soldier playsets and is one of the last standing purveyors of green army men in the United States. Introducing women warriors to the ranks of the iconic toy, which was inducted into the Toy Hall of Fame in 2014, is an idea Imel had toyed with over the years, he writes on the company blog.

“[In] June of 2018, I received an email from retired Navy Sailor JoAnn,” writes Imel. “She was looking for female toy soldiers for her granddaughters, and made a compelling case for why Plastic Army Women should be produced. I spent a good chunk of a weekend putting together the basics for the project, set up an email list, wrote a blog post, and got some art made to illustrate the idea. Initial response was very positive, but my schedule and budget for the year was full, so not much happened,” writes Imel, until he received that letter from Vivian last month.

Vivian’s plea was the tipping point for Imel, and the media took notice, notably CBS News. Long story not quite short, Imel is now committed to producing a set of Plastic Army Women in at least four different combat poses in time for the 2020 holiday shopping season.

Imel has commissioned some prototype sculptures, shown here, and he is currently readying a rubber mold and casting a handful of resin figures. The final figurines probably will be molded in low-density polyethylene, “as that seems to be the customer preference,” Imel told PlasticsToday.

Although BMC products can be found in some retail outlets, the company primarily sells its toys online. “You will be able to pre-order at some point,” he writes on the company blog. In the meantime, he invites interested parties to submit their email address on his blog to be notified.

Imel also is considering launching a crowdfunding campaign for the Plastic Army Women, perhaps as soon as November.

Founded in 1991, BMC Toys currently produces a few hundred thousand soldiers annually. It partners with contract molders in Michigan, Pennsylvania and China. “The plastic injection tool [for the Plastic Army Women] most likely will be made in China,” Imel told PlasticsToday, but he has not decided if the toys themselves will be molded in the United States or China. “The final choice will be determined by timelines, logistics, customer preference and, of course, overall cost consideration,” he said.